On October 22, 1866, Carl arrived in America.  In fact Carl came to America many times.  In fact, I found a list that said Carl came to America 18 times between 1858 and 1872.  You see, Carl was a sailing ship with the name of Carl.  When the Carl arrived in 1866, it was carrying quite a few passengers that settled in East Perry County, Missouri and West Jackson County, Illinois.

The illustration below is said to show the Carl around 1865. 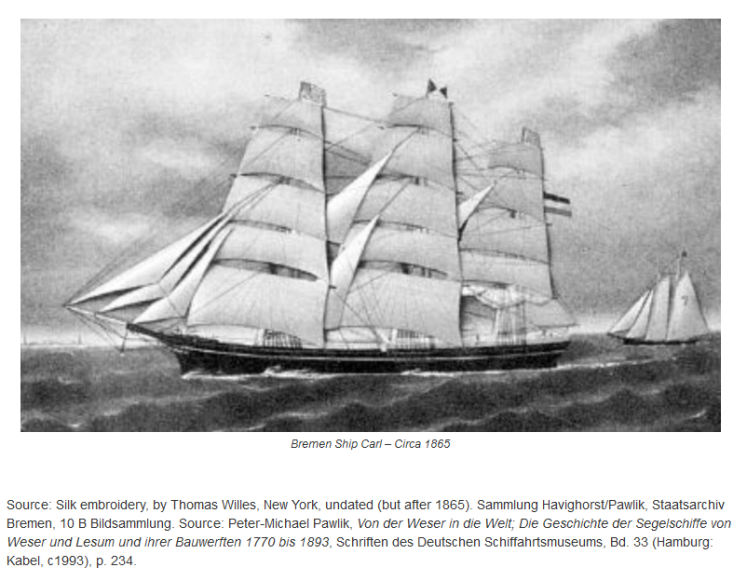 The Carl left Bremerhaven on August 25, 1866 and arrived in New Orleans on October 22.  It took about 8 weeks to make the voyage, which is a little longer than the average time for that era.

There are a few facts in this story that seem conflicting.  One of them is the fact that the passenger list for the Carl has a heading that states it was a New York record, not a New Orleans one.

Another conflict can be seen when you compare the above list which states there were 461 passengers on this ship, but the passenger list shows only 451.

What makes the Carl’s voyage so important to this area is the fact that so many people who have lived around here and across the river near Jacob, Illinois came to this country on that ship.  I went through our German Family Tree and found the following surnames that are said to have come on the Carl:

I am amazed at the number of passengers that were on the Carl.  I guess I have gotten used to passenger lists like the ones containing the 1838-1839 original immigrants that did not even have 200 passengers.  I guess 30 years later, the ships must have gotten considerably larger.

Following is a short history of the ship, Carl:

The Bremen ship CARL was built at Vegesack/Grohn by Johann Lange, for the Bremen firm of E. C. Schramm & Co, and launched on 2 December 1857. 498 Commerzlasten / 1099 tons; 52,5 x 10,5 x 6,7 meters (length x beam x depth of hold). International Signal Code: QBNS. Masters of the CARL were, in turn, E. Lüdering, Hinrich v. Harten, Christian Friedrich Otten, H. C. Bockelmann, and J. Hashagen. Originally engaged in the “triangle trade” between Bremen, New York, and the cotton ports of the south, she was transferred to the petroleum trade between North America and Europe in the 1870’s, when she ceased to carry passengers (vessels engaged in the petroleum trade customarily did not carry passengers). In 1888, the CARL was sold to A. Ménard, of Fiume, then in Austria-Hungary, who first entrusted her to Capt. Michielli, but in 1890 assumed command himself. On 6 August 1892, the CARL stranded off Little Hope Island, Nova Scotia, and became a total loss.

If I was to guess, many of these immigrants may have waited until after the Civil War to make their pilgrimage to America.  I am also guessing that many of our regular readers can trace their ancestors back to the 1866 voyage of the Carl.

Just a quick note:  The Lutheran Heritage Center & Museum is hosting it biannual International Immigration Conference later this week.  We are very busy getting prepared for this event, so the possibility of blog posts this week is pretty low.  I should be able to get back to a more regular schedule once the conference is over.