The centerpiece of today’s post will be the photograph shown below which shows a wedding party from 1904. 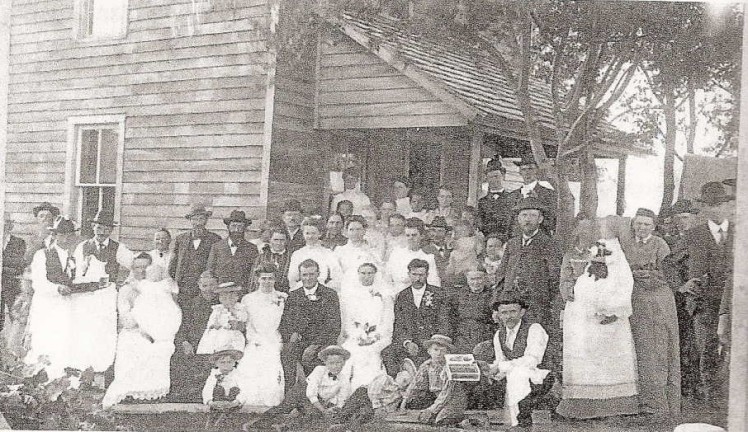 I have seen several photos such as this one.  It illustrates some of the traditions that were common in Perry County weddings of that era.

The story begins with a February 10th birthday.  Frieda Fritsche was born on February 10, 1882.  She was born in Germany, and her family did not immigrate to America until 1890.  Her parents were Heinrich and Bertha (Boehme) Fritsche.  We have this photo of Frieda’s parents.

Frieda would later get married to Herman Roth.  Herman was born on August 11, 1874.  His parents were George and Elizabeth (Roth) Roth.  A while back, I wrote a story about two Roth-Roth weddings that took place on the same day.  That post was titled, Roth-Roth and Roth-Roth.  Herman’s parents were another example of an earlier Roth-Roth marriage.

Four years before their marriage, we find both Frieda and Herman in the 1900 census for Salem Township in Perry County.  First, here is the entry for Frieda.

By 1900, Frieda’s father had died, so her mother, Bertha, was the head of the family.  Meanwhile, Herman was a 25 year old blacksmith living with a family named Lovett.

On June 5, 1904, Herman and Frieda were married at Salem Lutheran Church in Farrar.  The church record from Salem and their marriage license say Herman was from Jackson County, Illinois.  Here is the marriage license for this couple.

We have this wedding photo which includes some of the witnesses for Frieda and Herman. 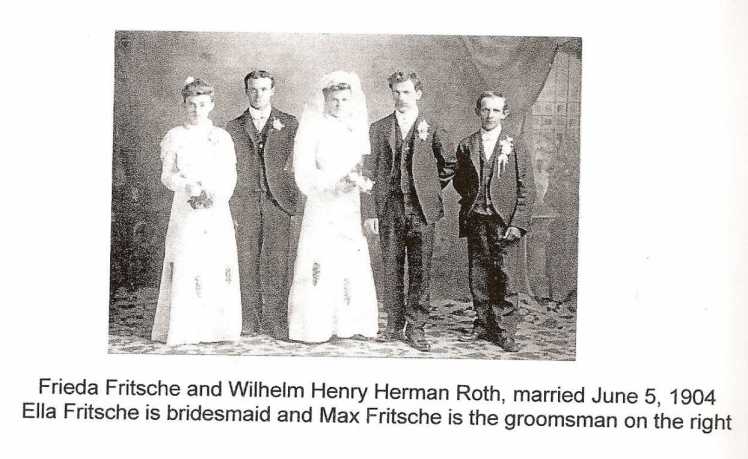 Ella and Max are the two siblings we saw in the 1900 census for Frieda.  I am not sure who the gentleman is that is standing second from the left.  My best guess is that it is someone from the Roth family.

After they were married, Herman and Frieda were living with Herman’s mother, Elizabeth, in Union Township in Perry County.  Herman was a farmer and the family included three children.

According to our German Family Tree, there were seven children born into this family, but two of them died right away.  I may be wrong about this, but I think the parcel of land with the red box in this image may have been the farm of Herman Roth. 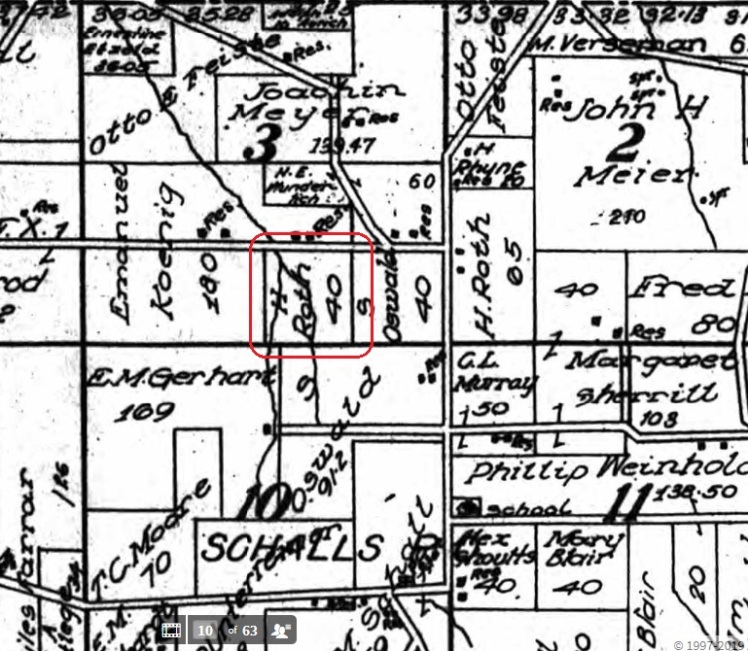 Both Herman and Frieda are buried in the Concordia Lutheran Cemetery in Frohna, Missouri. 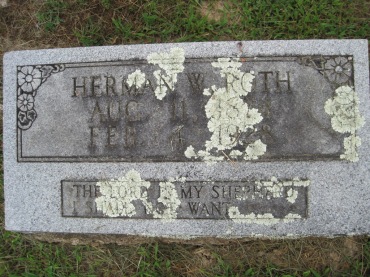 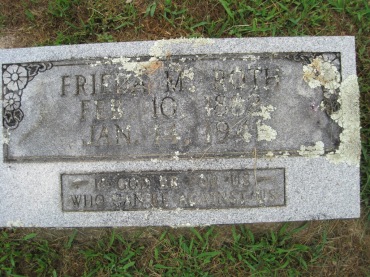 Now let’s return to the photo of the wedding party.  Remember, the wedding took place in June of 1904.  Most wedding receptions took place at the family’s home back in those days.  This photo is said to have been taken in Farrar, so I am guessing that it was taken at the Fritsche home.  That would have been the home where the widow Bertha Fritsche lived with her family.  Bertha would die  in September of 1904.

The railroad did not start operating through Perry County until July of 1904.  The automobile had not been introduced to this area yet, so probably most of the folks in that wedding photograph got there by walking, by wagon, or by horseback.

There are a few characteristics in photos I have seen of wedding parties back in those days.  First, you often see beer being served.  Not only is there beer, but there are usually young men who were assigned the duty of serving the beer to those in attendance.  Look at this close-up of the two men who were beer servers at that event. 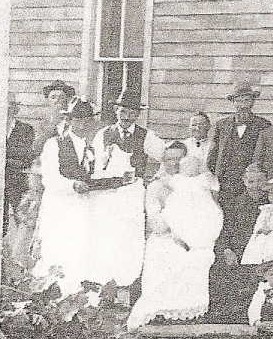 Another benefit of these weddings is that cigars were often passed out at these parties.  We see a young man in front holding a cigar box. 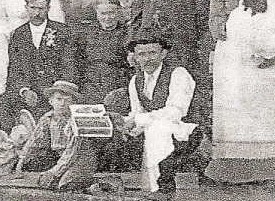 The two men serving beer and and the one serving cigars were said to have been Fritsche boys.  If so, Frieda only had three brothers.  They were Max, Bruno, and Bernhard Fritsche.

Cameras in those days may have required a longer exposure time.  So to get a very clear image, people had to stand very still.  If you look at the woman holding a baby on the right side of the photo, you will see that the baby may have moved, also causing the mother to move.  Their images are quite fuzzy. 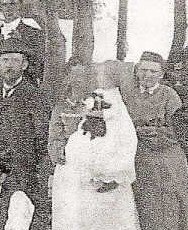 I love the fact that the baby is holding her precious doll.

There are four young boys in the front of the photo.  They can be seen in this close-up.

They are all wearing what seem to be straw hats.  One of them does not look too thrilled to have this photo taken.

Speaking of hats, you should also notice that most of the men in this photograph are wearing hats, and they are all more or less the same style.

I also think the mother of the bride, Bertha Fritsche, is sitting on left side of the maid of honor with a child on her lap.  I also think Herman’s mother, Elizabeth, is sitting next to him.

I love looking at old photographs like this.  Maybe there are other things that you notice that I haven’t.

One thought on “Bride, Groom, Beer, and Cigars”