Our story today starts with a birthday on April 4, 1885.  The birthday girl was Magdalena (Lena) Grosse of Altenburg.  She was the daughter of John and Lina (Petzoldt) Grosse.  She was baptized at Immanuel Lutheran Church.  Here is her baptism record in two images.

The John Grosse house was located in Altenburg where Highways A and Y intersect.  It is also the intersection of Main Street and Ridge Road.  We see John Grosse’s property in this 1915 map of Altenburg.

We have an old photo of the John Grosse house.  This would have been the house in which Magdalena grew up.

I took the photo below of the same house as it looks today. 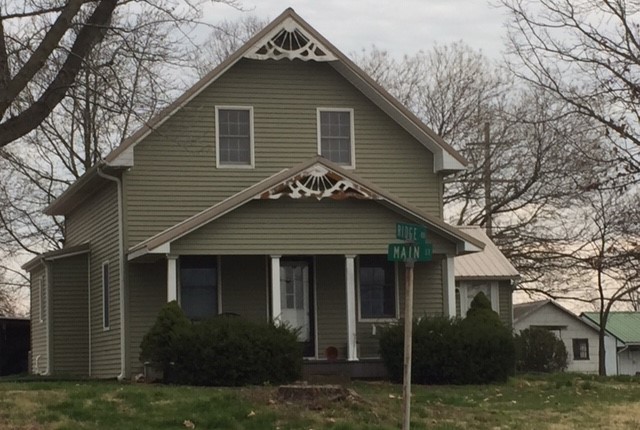 In the Grosse family photo shown below, I have placed a red arrow to indicate which daughter is Magdalena.

Six months before Magdalena’s birthday, her future husband, Arthur Palisch, was born.  Arthur was the son of Moritz and Pauline (Koenig) Palisch who lived in the Dresden area southeast of Altenburg.  Arthur was born on October 3, 1884 and baptized at Immanuel Lutheran Church.  Here is his baptism record (also in two images).

It is not often that I find a future married couple on the same page of the church’s baptism records, but that is the case here. 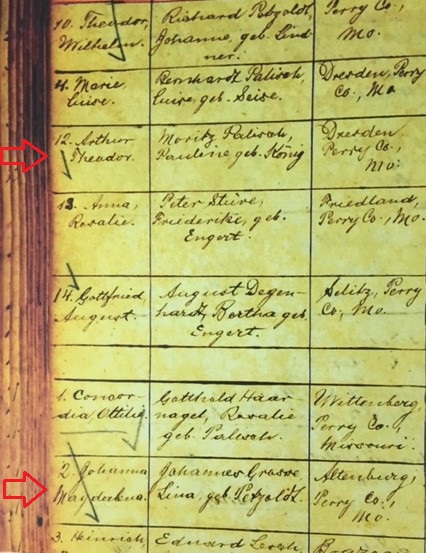 We find both Lena and Arthur in the 1900 census.  First, here is Lena.

Next, here is Arthur.

On February 25, 1906, Arthur married Lena.  Below is their marriage license.

I found a wedding photo of this couple in a Grosse family binder that we have in our research library.

Arthur was a farmer, and this 1915 plat map shows two parcels of land belonging to A T Palisch.

The first census in which we find the Palisch couple was the one made in 1910.

Arthur and Lena had no children of their own at this time, but we find two children living in their household.  One was Arthur’s nephew, Alfred Engert.  The story about why Alfred was not living with his parents was told in the post, A Troubling Topic.  The other child was described as an adopted daughter.  Her name was Ruth Thompson.  In 1913, we find this confirmation record for Ruth in the Immanuel books.

Ruth married John Rabold in 1917, so this is the only census record in which we find Ruth in the Palisch household.  Below is Ruth’s marriage record in the Immanuel books.  She is named Ruth Palisch on this entry.

Arthur and Lena had two children of their own before the 1920 census.  We find this entry for this household.

This time there is another youngster living in their home named Eleonora Zwosta.  Right behind her name, it looks like it could be read either “servant” or “daughter”.  I am guessing the census taker wrote the word servant on top of the word “daughter”.  Actually, Eleonora was a niece of Magdalena.  Lena’s sister, Julia, had married Heinrich Zwosta, and they had three children.  I believe Heinrich died, and then Julia married Martin Degenhardt.  We find them living in St. Louis in the 1910 census.

The John Grosse in this entry was a brother of Lena and Julia.  Eleonora Zwosta married Arthur Gerler in 1923.  The surname, Zwosta, has the distinction of being the last one in our German Family Tree.   I will show one more census for Arthur and Lena.  It is the one taken in 1940.

This time we see their son, Leo, had married Lillian Puchbauer, and this young couple was living with Arthur and Lena.  In 1956, Arthur and Lena celebrated their golden wedding anniversary, and this photo was taken.

Arthur Palisch died in 1963 at the age of 78.  Below is his death certificate.

Lena did not die until 1978 at the age of 93.  Her death took place too late for us to have access to her death certificate.  Arthur and Lena are buried together in the Immanuel Lutheran Cemetery in Altenburg.

The Palisch’s in today’s post are an example of a couple that did not have many children of their own.  They actually gave homes to more children that were not their own.

One thought on “Art and Lena’s Assorted Children”