Exactly one week ago, I published the post, Wittenberg Mail Carrier, which told the tale of the marriage of Martin Grebing and Emma Richter.  Three years after that wedding, Martin’s only sibling, Ida Grebing, married one of Emma’s brothers, Martin Richter.  I tell that story today because Martin Richter was born on April 3, 1869.  Martin was the oldest son in the family of Ehregott and Elizabeth (Hartung) Richter.  His baptism record is found in the books of Trinity Lutheran Church in Altenburg.

Martin is found in the 1870 census for Brazeau Township.

On September 3, 1875, Ida Grebing was born.  Her parents were John and Anna (Noennig) Grebing.  Below is her baptism record from Trinity, Altenburg.

The Richter land was located in the bottomland near Wittenberg.  This 1915 map shows where it was located.  There are two parcels of land labeled with E. Richter, Martin’s father.  This would have been where Martin was raised.

On February 17, 1895, Martin and Ida were married.  We can look at their marriage license from Perry County.

Here is this couple’s wedding photograph.  Ida was wearing a black and white dress, and Martin had a suitcoat buttoned only at the top.

The first census in which we find this couple was the 1900 census.  Ida’s mother and one of Martin’s brothers were living in this household.  Martin and Ida had their first two children by this time.

Between 1900 and 1910, this couple changed locations.  In fact, both Martin and his brother, Arthur Richter, moved their families to Shawnee Township in Cape Girardeau County between 1900 and 1910.  There was a flood in Wittenberg in 1903.  Maybe that event had an influence on their decision to relocate.  Here is the entry for Martin’s family in the 1910 census.

Now the Richter family had 6 children.  Our German Family Tree shows 9 children born into this family.  A Richter Family binder that we have in our library contains the following photos of children in this Richter family.  The thumbnails can be clicked to enlarge them.

A later picture was taken of Martin’s son, Ernst with two of his father’s mules. 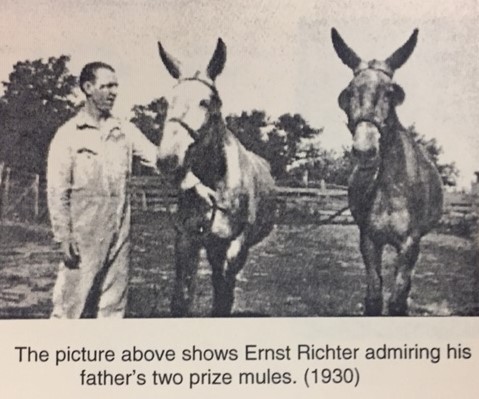 The Richter name disappeared from the Wittenberg area back in the early 1900’s.  I am going to attempt to explain why it disappeared.  First, we have the two brothers, Martin and Arthur, moving to Shawnee Township.  Another brother, Theodore, never married.  The last brother, Joseph Richter, had four sons.  We see Joseph and several members of Martin’s family in this family photo.

Joseph died rather early at the age of 38.  He was married to Bertha Vogel.  After his death, Bertha married Otto Lueders, who became a widower around the same time.  Otto moved his family to Fort Wayne, Indiana.  We find them in the 1930 census there.

I will repost a photo I used in the previous story about the other Grebing/Richter wedding.  We see Martin standing in the back with his sister, Emma, who also married a Grebing.  Their father, Ehregott is sitting in the front with the canes.

Martin died in 1954 at the age of 85.  Here is his death certificate.  He died in the Perryville Nursing Home.

Martin and Ida are buried together in the Immanuel Lutheran Cemetery in New Wells, Missouri.

One of Martin’s sons, Walter Richter, became a Lutheran teacher, and we crossed paths over the years.  Walter died a few years ago.  He was always the chief organizer of Richter family reunions that often took place in this area.  A few years ago, some Richter descendants attended such a reunion nearby and visited our museum.  They were connected to a brother of Walter’s who ended up in Pilger, Nebraska.  Pilger was victimized by a tornado in 2014, and now is in the area of Nebraska that has experienced devastating floods.  I hope the Richter’s continue to get together for reunions and show up to visit us in the future.

Walter also dabbled a little in art.  Carla Jordan, our museum director, has this picture of the Ehregott Richter home done by Walter hanging in her office.