The story begins in Germany.  August Dietrich Fick was born on April 18, 1877.  His parents were Hans Peter and Engel (Versemann) Fick who likely lived and died in Germany.  August came to America by himself in 1892 when he was just 15 years old.  Family stories say that he came to Perry County, Missouri at first, but before long, he moved across the river to Jackson County, Illinois.  We find him living in the William Arbeiter household in the 1900 census for Fountain Bluff Township and working as a carpenter.

In 1901, August married Hulda Vogel at Christ Lutheran Church in Jacob, IL.  Here is the church record for that marriage.  This document states that August was from Tostedt, Hannover, Germany.

Hulda Vogel was born on October 4, 1881 and baptized at Christ Lutheran in Jacob.  She was the daughter of Henry and Amalia (Palisch) Vogel.  Below is her baptism record.

We have this wedding photo of August and Hulda. 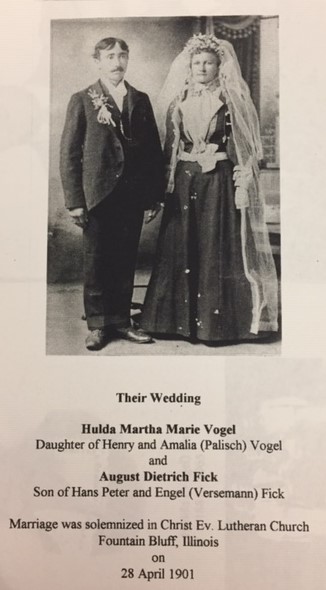 Two sons were born to August and Hulda before 1910, and they were baptized at Christ Lutheran.  The 1910 census shows the Fick household with two children and two boarders.  August was a farmer.

Around 1911, August moved his family to Somerset Township, which is not far from Murphysboro.  The family then became members of Immanuel Lutheran Church in Murphysboro.  Two more sons were born there, but one of them died in infancy.  The Fick family had three sons who lived to adulthood.  The photo below shows August, Hulda, and the three boys.

The 1920 census showed August living in the Somerset Township and working as a farmer.

Around 1925, this family moved into Murphysboro and operated an independent grocery store.  We see evidence of that in the 1930 census.  His son, Willard was also involved in that enterprise and even continued to operate it after his father’s death.

August died in 1938 as a result of a heart attack.  I am guessing that it must have been about the time of August’s death that this photo of the three brothers was taken.

Before I move on, I want to show a photo taken of the Henry Vogel family which includes Hulda, who is standing at the upper left. 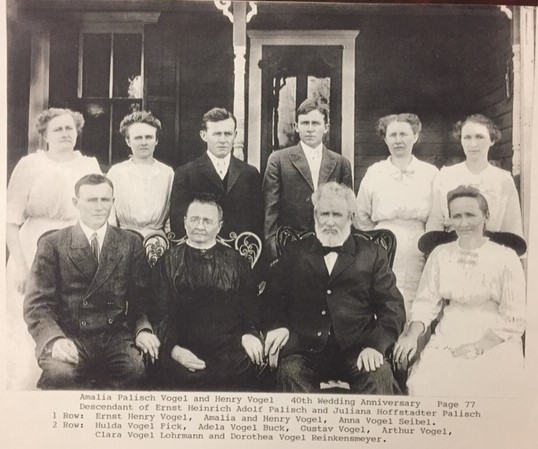 As I mentioned earlier, Willard went on to become a grocer.  The oldest son, Albert, became a medical doctor who had a practice in Humboldt, Tennessee.  I choose to focus some attention today on the youngest boy, Leonard.  I will state that this son went by the nickname, Buddy, and I will use that term from here on.

Buddy was not born until 1923, so he was 16 years younger than his next older brother, Willard.  Buddy attended Immanuel Lutheran School in Murphysboro, and then went on to attend St. Paul’s College in Concordia, Missouri.  He completed his high school diploma there in 1941, but then World War II happened.  Buddy became a member of the Army Air Corps.  He was a tail gunner on a B-24 Liberator Bomber.  We see him pictured here with the crew in which he was a part.

On July 28, 1944, Buddy’s plane was shot down over Polesti Oil Fields in Romania.  All the members of the crew were killed.  Eight of the bodies were later recovered, including Buddy’s, and were buried in the Fort Scott National Cemetery in Fort Scott, Kansas.  Two of the crew members’ remains were never found.

A memorial service was later held at Immanuel Lutheran in Murphysboro.  This photograph was taken at the event.  The Air Medal with four Oak Leaf Clusters was presented posthumously to Hulda.

In a binder we have for the Vogel family in our research library, you can find a copy of the last letter written by Buddy to his mother right before his fatal flight.  He was 5 missions short of being sent home.  I will just show the last paragraph and the closing.  I am sure the original of this letter is still a cherished item in this Fick family.

We have this photograph of Hulda that was taken later in her life. 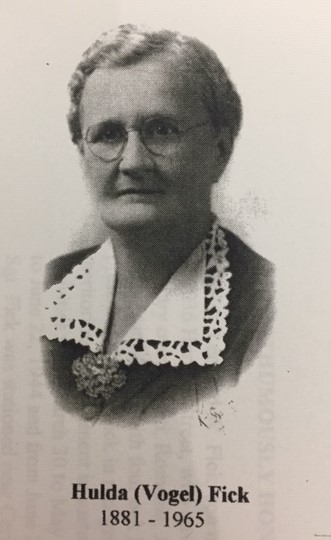 Hulda died in 1965, and she was buried next to her husband in the Tower Grove Cemetery in Murphysboro.

The obituary for Hulda which is shown below indicates her faithfulness in serving her church and community throughout her life.

I will close today’s story with the Bible verse that was given to Buddy Fick for his confirmation.  It was a verse that was also mentioned at his memorial service.  Hulda and her family could take comfort from the knowledge that her Buddy, even after his death, continued to be found in the Lord’s hands.  Mission Accomplished.

One thought on “Hulda’s Boys & the Loss of Her Buddy”