I was first attracted to a Brandes/Franke wedding because it took place on this day 125 years ago.  As it turned out, this marriage only lasted 12 years.  The story certainly contains some tragic deaths, but it is also one of those stories where the extended family pitched in to provide care for children who had become orphans.

The first character in this story was Conrad Brandes who was born on January 26, 1867.  He was the son of William and Maria (Hemmann) Brandes, which made him a grandson of the J.G. Hemmann who has been mentioned in quite a few posts on this blog.  Conrad was baptized at Grace Lutheran Church in Uniontown, Missouri.  Below is his baptism record.

The second character in this story was Anna Franke.  This name looks like the famous name, Anne Frank, but not only do these two names have a slightly different spelling, they are not pronounced the same.  Around here, the surname Franke is pronounced Fron-key.  Anna was born on November 28, 1870.  She was the daughter of August and Theresa (Koenig) Franke and baptized at Grace Lutheran Church in Uniontown.  Here is her baptism record which is almost unreadable.

These two individuals can be found in the 1880 census for Union Township in Perry County, but there is an interesting difference between the two.  Anna and her family can be found in the census records which you can search on Ancestry.com.  Anna was 9 years old in 1880.  Here is that entry.

Conrad, on the other hand, cannot be found in the documents available on Ancestry.  Instead, you have to look in the set of records for Union Township that were misplaced a long time ago and were only recently found.  Conrad was 13 years old in 1880.  Here is the Brandes family in those records.

That leads us up to the wedding which took place on May 10, 1894, making today their 125th anniversary.  As you would expect, Conrad and Anna were married at Grace, Uniontown.  We have their marriage license from Perry County.

We also have this couple’s marriage record from the church books.  I have included some extra entries which will be used later in this post.  The Brandes/Franke entry is at the bottom of this image.

The 1900 census is the only one in which we find this Brandes couple.  By that time, they had two children.  They were also living in the same household with Conrad’s parents.  Conrad was a farmer.

I also find it interesting to look at this map from 1915 that shows property ownership by several Brandes, Hemmann, and Franke families located in very close proximity to one another.  Back in the days of horse and buggy transportation and only face-to-face communication, young people often found their spouses from among their neighbors.

Four more children were born into this family in the first decade of the 1900’s.  The last three of these children died early.  A son born in 1901 lived only 7 months, dying of convulsions according to the church death record.

The year 1906 was a miserable year for this family, especially for Conrad.  On August 9 his wife, Anna, died at the age of 35.  Her death record states that she died of typhoid fever.  Then on October 6, their 4 year old daughter, Sarah, died, and her cause of death was also typhoid fever.  As if that was not enough, on November 23, their daughter, another Anna, died.  Her death record states she died from bronchitis.  She had just recently celebrated her first birthday.  Three death records for members of this Brandes family can be found on the same page with only a Stueve death squeezed in between them.

The three gravestones shown below were all placed in the Upper Cemetery of Grace Lutheran Church over just a matter of months in 1906. 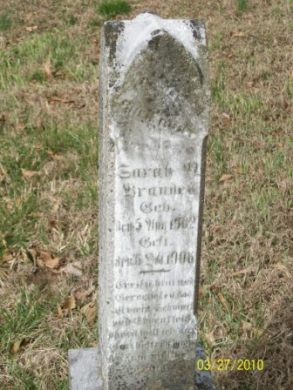 These deaths left Conrad with his three oldest children, Alma, William, and Mary.  Then about one year later, Conrad died on August 20, 1907 at the age of 40.  Typhoid fever took another member of this Brandes family.  Here is his death record in the church books.

Conrad is also buried in the same cemetery.

With Conrad’s death, it left Alma (age 12), William (age 10), and Mary (age 6) as orphans. That led me on a search for what happened with these three orphans.  I found them in the 1910 census.  They were living in the household of Ernst and Martha Rudert in Union Township.

So just who were these Ruderts?  It did not take me long to find out that Martha Rudert’s maiden name was Franke, and she was Anna Brandes’s sister.  If you look once again at the marriage records shown earlier, you will see that Ernst and Martha Rudert were married just a matter of months before Conrad and Anna Brandes.  You may also notice that Anna was an attendant at her sister’s wedding before she was married.

I can tell you that on the same census page as the 1910 entry shown above you will find another Brandes family.  However, that Brandes household had 7 children and an elderly mother.  These Rudert’s were both in their 40’s and had no other children living with them.  What was their story?

It turns out that Ernst and Martha had two children in the 1890’s but both of those children died in infancy.  Then there were no more children.  So this couple was childless in 1907 when the Brandes children became orphans, and this is the member of the Brandes’s extended family that took them in as their own.  It is the type of story that I have seen repeated over the years in East Perry County.

The three Brandes children went on to live well into their adulthood, each of them getting married.

In closing, let me point out one other fact about this day.  I want to give a shout-out to my parents in heaven who were married on this day in 1947.  This would have been their 72nd anniversary. 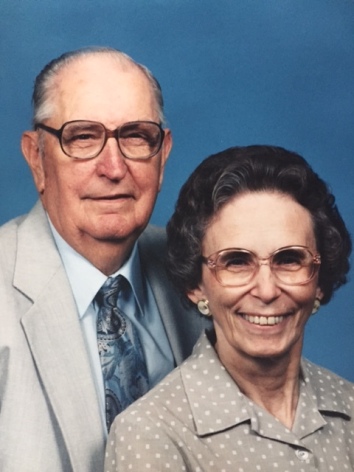 2 thoughts on “A Uniontown Family Copes with Tragedy”