We find Joseph in the 1870 census for Brazeau Township.  He was 4 years old.

In the 1880 census, we see Joseph at age 14 and living in the same household (the Darnstaedt Cabin).  His father was shown as having dropsy.  He would die later that year.

A family binder that we have in our museum says that Joseph married Anna Weber in October of 1892.  I find it unusual that we do not have any church or civil record of that marriage.  When they were married, both of Anna’s parents were dead, as well as Joseph’s father.  So only Joseph’s mother would have been able to attend their wedding.

Anna Weber was born on November 30, 1872, the daughter of Herman and Paulina (Schroeder) Weber.  She was also baptized at Trinity Lutheran Church in Altenburg.

Anna can be found in the 1880 census for Brazeau Township.  She was 8 years old.

After Joseph and Anna were married, we find them living across the Mississippi River in the Fountain Bluff Township of Jackson County, Illinois.  We see them in the 1900 census living there, and Joseph was a farmer.  One of Anna’s brothers was a boarder in their household, and by then three children had been born into the Darnstaedt family.  The daughter shown on this census as being one month old was fortunate to be included in this census.  She was born in April of that year and died in June.

Not long after this census, Joseph and Anna moved their family back over the river to Altenburg.  If you look at this list of their children, you will see that the first 3 of their children who lived to adulthood were born in Jacob, Illinois and their last 3 were born in Altenburg, Missouri.  They must have moved back to Perry County sometime between 1901 and 1904. 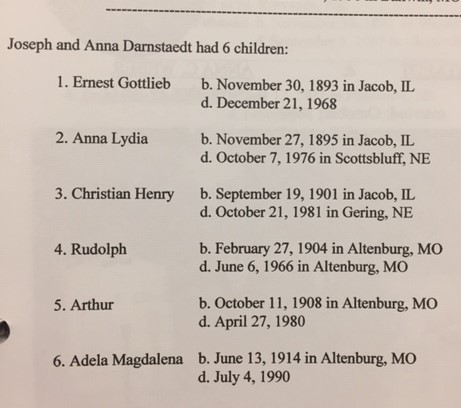 The 1910 census shows this family living in Altenburg, where Joseph is called a carpet weaver.

I was able to locate photos of Joseph and Anna which must have been taken later in their lives.

Also, the same family binder in which I found the above photo has a picture showing their six adult children.  I am guessing this photograph may have been taken at the second marriage of their daughter Adele in 1954.

The last census in which we find Joseph was the one taken in 1940.  Two single sons were still living in his household.

Anna died in the St. Louis area in 1950.  She was apparently living with her daughter because her daughter, Adele, was the informant on her death certificate.

Both Joseph and Anna are buried in the Trinity Lutheran Cemetery in Altenburg.

I am very grateful that we have a family binder for the Darnstaedt family in our research library.  Quite often when I am composing these posts, the only place I can find photographs of the people involved is in these family binders containing their histories.  If your family has roots is East Perry County, we would love to add your family’s history to our collection.