One of the characters in my book, Mama Buenger: Mother of a Synod is Clementine Buenger.  She is today’s birthday girl.  She was born on June 15, 1823 in Etzdorf, Germany.  She was the daughter of Rev. Jakob and Christiane (Reiz) Buenger.  Her father died in 1836, so her widowed mother decided to become a member of the Gesellschaft that traveled to America in 1838-1839.  Because of some unusual circumstances, Christiane and her 8 children that came to the United States were separated and had to make the voyage on 3 different ships.  Clementine joined several of her siblings on board the Olbers, which then made the journey up the Mississippi River aboard the steamboat Selma.  Here we see the Buengers on the Olbers passenger list when they arrived in New Orleans.

Emilie, another sister, came aboard the Copernicus.  Christiane (Mama Buenger) and the two other siblings, Friedrich and Agnes arrived in New York aboard the Barque Constitution.  The story about the reason for this family’s separation was told in the post, Dual Landings.  Because these three landed in New York, they became part of what we call the New York Group that joined the other immigrants in Perry County in May of 1839.

Zion on the Mississippi shows the following Buenger family members who came with the Stephanites that arrived in New Orleans.

Also aboard the Olbers was Johann Gottlob Neumueller, who would become Clementine’s husband.  He traveled to America by himself.

Gottlob is called a shoemaker on this list as well as the list shown in Zion on the Mississippi.

Clementine and her family first went to Perry County to begin their life in America.  Christiane became the owner of 11 acres of property in what became the Dresden area.  That property is very special to me because I am the present owner of those same 11 acres.   However, the Buenger household eventually all ended up in St. Louis in the early 1840’s.  I speculated in Mama Buenger: Mother of a Synod that Christiane moved much of the family in the spring of 1841, but I have no proof of that.

I have no indication that Gotthold Neumueller came to Perry County in 1839.  I suspect he chose to use his shoemaking skills to find work in St. Louis.  Here is what we do know.  Rev. C.F.W. Walther married Clemetine’s older sister, Emilie, on September 20, 1841.  Then about two months later, Gottlob Neumueller married Clementine Buenger in St. Louis on November 14, 1841.  We have a civil marriage record for that wedding.

Five Neumueller children were born and baptized at Old Trinity Lutheran Church in St. Louis.  Not all of them lived very long.  When Clementine’s mother had died in 1849, her estate records include this receipt from 1852 that says Gottlob did some digging and repairs at the Buenger home.

I am thinking that a “backhouse” might have been an outhouse.

Then in 1853, the first of some more children was born and baptized at Trinity Lutheran Church in Altenburg.  Also, Clementine’s brother, Ernst Eduard Buenger was a sponsor for that baptism.  Both Gottlob Neumueller and Ernst Eduard Buenger moved their families back to Perry County.  In fact, I have records that tracked the ownership of my property, and there is evidence in those records that Christiane’s property went to Ernst Eduard and then later to Gottlob Nuemueller.  We find Gottlob and Clementine’s household in the 1860 census for Brazeau Township.  Seven children are listed.

In 1870, we once again find the Nuemueller’s in the same township, only this time Gottlob is called a brick-layer.

In 1879, Gottlob died at the age of 68.  On a webpage that someone in the Buenger family has posted on the internet, it includes the following information about Clementine and Gottlob.

“Gottlob earned a meager income mending shoes in the winter and digging cellars and cisterns in the summer. His health deteriorated after he spent a night sunk to his neck in a bog, where a child discovered him at daybreak, and he died not many years later.

Clementine lived in her childrens’ homes afterwards, requesting to be buried wherever she died. She died from a sudden illness while visiting her daughter Anna in Vallonia, IN and was buried in the Lutheran cemetery there according to her wishes.”

As indicated above, it says Clementine died in Vallonia, Indiana.  Family records say that she died on January 1, 1898.  I looked on Findagrave.com for her grave in the Trinity Lutheran Cemetery in Vallonia, but she is not listed.

I am almost certain that her daughter Anna was married to Rev. Theodore Siek.  I found this record of her marriage on Ancestry.com.  I am thinking the Rev. Siek was serving Trinity Lutheran Church in Vallonia when Clementine died. 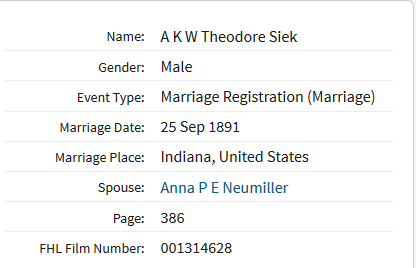 Rev. Theodore became pastor of St. John’s Lutheran Church in St. James, Missouri in 1899, not long after Clementine’s death.  I found this listing of the first pastors of that congregation online.

Rev. Theodore Siek died in 1900 and is buried in the St. John’s Lutheran Cemetery in St. James, Missouri.  Then we find this interesting census entry for later in 1900.  It can be found in the St. Louis census records.

Anna Siek was living with a daughter, Lena, in the Edward Lehmann household.  Edward was a minister.  His wife, Liddy, was Anna’s older sister.  However, if you look again at the list of early pastors in St. James, Missouri, you will see that Rev. Edward Lehmann succeeded Rev. Siek after he died, and he is said to have started his ministry there in 1900.

We find evidence here that Gottlob and Clementine Neumueller had at least two daughters who married Lutheran pastors.   I think another daughter married a Kiesker who was a pastor as well.  In addition, one of their sons became a medical doctor in Altenburg.  His story was told in the post, Altenburg’s Early Docs.

In closing, let me show you a photograph we have of Gottlob Neumueller and another one of his darling, Clementine. 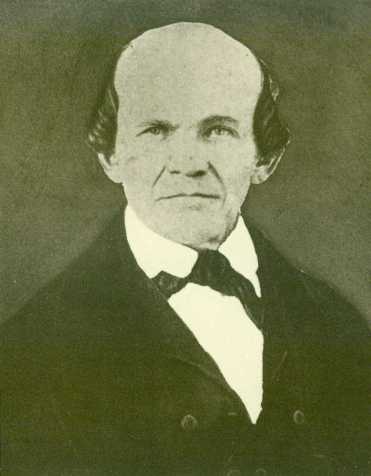 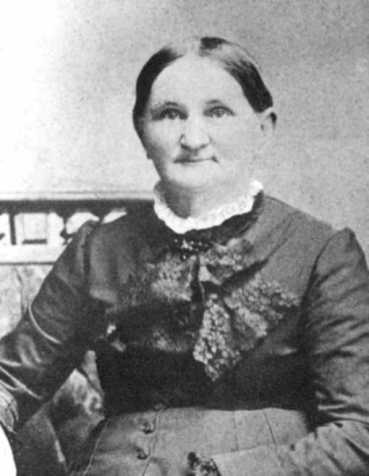 One thought on “My Darling, Clementine”