Thousands of people died in St. Louis during the summer of 1849.  The cause of death was the disease known as cholera.  It has been estimated that one out of every eleven people in that major city died from that disease primarily in the summer months of June and July.  Many people who had the means to do so left the city during this scourge, but most people were unable to escape it.  The illustration below depicts the angel of death hovering over St. Louis.

It was ten years after the German Lutheran immigration we so often focus on in this blog which took place in 1839.  Not long after this cholera epidemic occurred, Concordia Seminary was moved from Altenburg to St. Louis, but by then the danger had mostly passed.  In this post today, I will begin by looking at how our German Family Tree illustrates how this epidemic impacted an individual family.  Then I will focus on how it affected a Lutheran church.  Finally, I will discuss what was going on in the city of St. Louis, especially looking at what caused this epidemic and some of the effects it had on that city’s future.  St. Louis at the time was a bustling, growing city, as evidenced by this view of their riverfront. 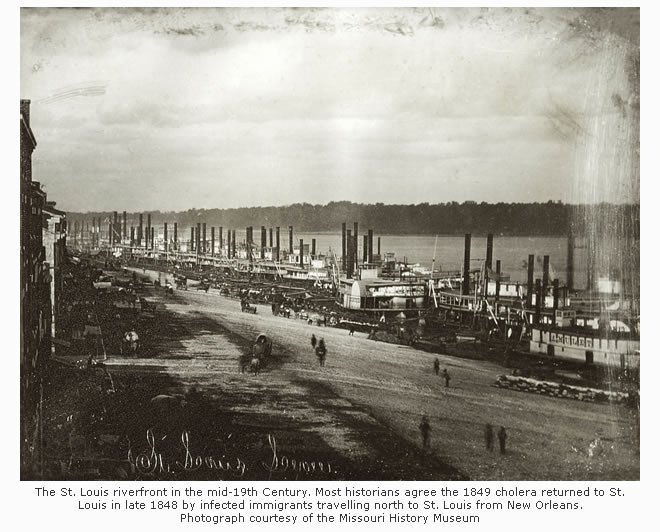 First, let’s take a look at a portion of our German Family Tree showing the family of Jacob Kalbfleisch.

Jacob must have been married previous to when these records were written, but we do not have documents to indicate who his first wife was.  Based on other information that we have, there must have been other children of Jacob from his first marriage.  In fact, I think there is a chance that the first two children shown above may have been children of his first wife.   The only baptism record shown which identifies the mother as Ernestina is the third one on the list.

The end of June, 1849 was tragic for this family.  First, on June 23rd, their 12-year-old son, Georg, died of cholera.  Four days later, their one-year-old son, William Friedrich, died of the same cause on June 27th.  The next day, Jacob lost his wife, Ernestina, on June 28th.  Finally, on June 30th, their 5-year-old daughter died.  Four deaths in one family in one week!

In a previous blog post titled, Maria Boettcher – An Answer to Jacob’s Prayers,  I included a family story that I found on Ancestry.com.

“Tragically, very shortly after their arrival in St. Louis the cholera epidemic swept through St. Louis taking 10% of its inhabitants in a matter of three or four weeks. It snuffed out 4 of Jacob’s family members within 8 days, his 12-year old son Georg first, then one-year old Wilhelm or William, then his wife Ernestine, and finally five-year old Marie. Young Katharina also was suffering horribly from the disease. Medical advice of that time refused water to cholera patients, but thinking that Katharina would soon also join her mother and the three others, Jacob relented and gave her as much water as she wished. The fever broke, she went right to sleep, and she made a miraculous recovery! Jacob was now desperate for a housekeeper for his 2 remaining children, Anna Elizabeth and Katharina, and so he found a widow, Maria Alt Boettcher, a member at Trinity, to help. He later married her. She must have been a remarkable woman, for Katharina always spoke most highly of her.”

As this account says, Jacob would marry again, and in the 1850 census, we find this Kalbfleisch household after the epidemic including Maria, his new wife.

A later census would indicate that Jacob worked as a milk dealer.

After the Altenburg Debate in April of 1841, Rev. C.F.W. Walther moved to St. Louis to succeed his brother Otto Herman Walther, who had died.  He became pastor of Old Trinity Lutheran Church.  Rev. Walther was pastor of that congregation in 1849 when this cholera epidemic occurred.  The death records for this church, which we have as an Excel spreadsheet, tell the story of a summer of death.  Here is a portion of those death records in which you can find the Kalbfleish family members all lumped together.

Farther down in those death records you find some more that occurred during June and July, but must have been included in the church books later.

Rev. Walther must have been kept very busy performing funerals, not to mention comforting members of his church who were grieving.  If one of his sermons during those months was preserved, I would be interested to read it to see how Rev. Walther attempted to minister to his congregation as they suffered through this epidemic.  Christiane Buenger, C.F.W.’s mother-in-law and main character of my book Mama Buenger: Mother of a Synod, also died of cholera during this epidemic.  She is not included in the above death records, probably because she was a member of her son, Rev. J.F. Buenger’s, congregation at the time.  Rev. Buenger likely had a similar list to the one above in his congregation’s books, which we do not have.  One can also imagine how hard it must have been to keep up with the grave-digging chores during this time.

Eventually, it was determined that a large body of water located in St. Louis called the Chouteau Pond was one of the prime reasons for cholera, a water-borne disease, to have become such a big problem.  We see the location of that body of water on the map shown below.  It is indicated by the letter F.

Later, this pond was drained to prevent a repeated occurrence.  It was not just because it was a body of water.  It was how the growing city of St. Louis was dealing with its sewage.  The photo below shows this pond after its drainage.

Another change that took place after this epidemic was the city implementing a much-improved sewage system.

Even prior to 1849, several larger cities around America were having to deal with coming up with the required cemetery space that resulted from their population becoming so large.  What once was mostly handled by churches having their own graveyards was no longer possible in those larger cities.  Several of these metropolitan areas were instituting what they called “rural cemeteries”.  Land was purchased for cemeteries outside the city for the purpose of handling burials.  Such a plan was already in the works for St. Louis, but the cholera epidemic of 1849 accelerated those plans.  Later in that year, Bellefontaine Cemetery opened in an area which at that time was quite “rural”.  That cemetery, along with the adjacent Calvary Cemetery, became the largest area for burials in St. Louis.  I remember when I was young, our family would often drive past those cemeteries while traveling to visit my grandparents.  Those cemeteries went on for blocks and blocks and blocks.  Since then, the city of St. Louis has engulfed it so it is now an island of green in the midst of an urban area.   You can see it in the map below. 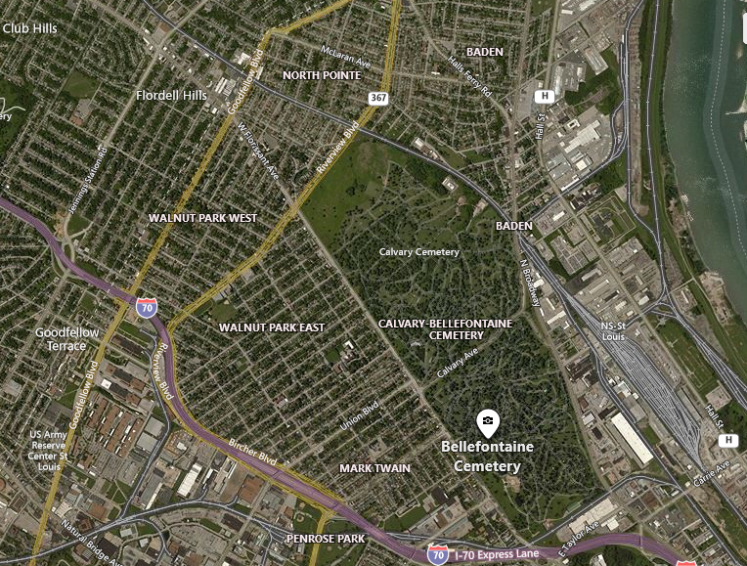 The Lutheran church in St. Louis established a cemetery of their own which was named Concordia Cemetery.  It was used primarily by the two churches, Old Trinity and Holy Cross Lutheran.  It is the cemetery in which Rev. C.F.W. Walther is buried.

Although the cholera epidemic in 1849 was indeed a tragic event, some good things resulted.  Throughout history we have seen evidence that people learn lessons from tragedies and make improvements.  That was the case with this terrible event from the summer of 1849.  I don’t think it’s an occasion to celebrate, but it is an important event to remember.  This year marks its 170th anniversary.