Today was the wedding day for Oswald and Gustav.  That may seem quite unusual, but for some reason not known to me, Augusta Pfeiffer became known as Gustav, a name almost exclusively associated with men.  A family history on Ancestry.com refers to Augusta as “Gustav”.  Today would have been the 123rd anniversary for Augusta and Oswald Haertling.  These two were married on July 5, 1896 at Immanuel Lutheran Church in New Wells, Missouri.  Below is their marriage license.

If you look closely, the bride’s name is shown to be Gusta(ve) Pfeiffer.

Let’s start by looking at the early days of Augusta Pfeiffer.  Augusta was born on March 7, 1877.  She was the daughter of Herman and Louise (Klaus) Pfeiffer.  Her father was a blacksmith in Shawnee Township in northern Cape Girardeau County.  Below is her baptism record.

We find Augusta in the 1880 census for Shawnee Township.  Augusta was 3 years old.

Oswald Haertling was born on March 4, 1872, the son of Herman and Sophia (Koenig) Haertling.   Here are photos of Oswald’s parents. 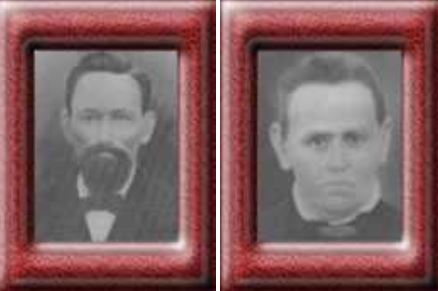 Oswald was baptized at Immanuel Lutheran in New Wells.  Here is his baptism record.

For some reason, I could not locate the Haertling household in the 1880 census.  Therefore, the first census in which we find Oswald was in 1900, and by then he was already married.  We looked at their marriage license earlier, but we can also look at their marriage record in the Immanuel, New Wells books.

The 1900 census shows the Haertling household living in the Apple Creek Township of Cape Girardeau County.  They had 3 children at that time, and Oswald was a farmer.  Augusta is shown as Gusta on this form.

Our German Family Tree shows 11 children born into this family, two of which did not live long.  The 1910 census shows them still living in the Apple Creek Township with 8 children, all sons.

1930 was the last year in which we find the Haertling household in the Apple Creek Township.

We have photos which were taken of Oswald and Augusta Haertling.

At the age of 68 and 63 respectively, Oswald and Augusta were living in Altenburg.  They were living with their daughter and son-in-law.  Nelda Haertling had married Bernard Schuessler.  We also see one of our museum’s docents, Richard Schuessler, in this entry.

It was in September of that same year, 1940, that Oswald died.  We have his death certificate.

Both Oswald and Augusta are buried in the Trinity Lutheran Cemetery in Altenburg.

The Oswald Haertling family takes up six pages in our German Family Tree.  The biggest reason for this is that so many of his children were boys so their descendants can be found in the Haertling section of that document.  Although the Haertling surname got its start in northern Cape Girardeau County, there are now several Haertling families to be found in East Perry County.  And the next time I see Richard Schuessler, I will have to ask him why one of his grandmothers was named Gustav.

3 thoughts on “Oswald and Gustav Haertling”