This has happened to me on several occasions.  After writing story about some East Perry County personality, a day or two later, I find another character who had the same name.   Yesterday, there was a Martin Mueller mentioned in the story.  He was the young man who married his step-sister, Elise Brandes.  Today, I ran across another story about a Martin Mueller.  With a surname like Mueller, I suppose it can almost be expected that there would have been more than one Mueller who had the name Martin.  However, finding a story on the day after discussing another Martin Mueller is quite coincidental.

We do not start with Martin, however.  We start with his future wife who happened to have today as her birthday.  Her name was Amalia Naumann.  She was born on July 27, 1852.  She was the daughter of Johann Traugott and Johanna (Miehsler) Naumann and baptized at Concordia Lutheran Church in Frohna.  Below is her baptism record.

The Naumann parents were both part of the Gesellschaft.  John traveled to
America aboard the Johann Georg.  Here we find his name on that passenger list.  I included some other names to indicate he was originally from Frohna in Germany.

Johanna Miehsler is a little bit more of a puzzle.  Zion on the Mississippi shows the following information about her in the list of immigrants included in that book.

She is listed as a maid from Nieder-Frohna who traveled on the Republik and the Knickerbocker (R-K).  However, I could not find her on the passenger list for the Republik.  I thought for a while that this was just another case of me not seeing something right in front of my eyes, but I have looked over that list too many times to have missed her name.  I did find her on a list of immigrants that was compiled by Rev. Gotthold Loeber and is included in the Trinity Lutheran Church books.  She is #179 on the image below.

Since she was called a maid, I took the time to also look at the infamous list of maids connected with Rev. Martin Stephan’s impropriety, but she was not one of them.

We find Amalia (although she is called Mary) in the 1860 census for Brazeau Township.  Her father was a farmer even though Zion on the Mississippi calls him a weaver.  This entry just shows some of the Naumann children.  The parents are on the previous page.

Now let’s turn to Amalia’s groom.  As said before, his name was Martin Mueller.  To be more specific, his baptism record gives his name as Gottlob Martin Mueller.  He was the son of Charles and Amalia (Kuehn) Mueller.  That would make him part of what we like to call the “Frohna Mueller’s”.  A story was written a while back titled, The Beginning of the Frohna Muellers.  Martin was born on January 14, 1848 and baptized at Concordia Lutheran Church in Frohna.  Here is his baptism record.

Since he was born before 1850, we can find him in that year’s census.

The 1860 census shows this family getting larger.

The last census in which we find Martin before he was married was the one for 1870.  He was 22 years old.

On October 26, 1871, Martin Mueller married Amalia Naumann at Concordia, Frohna.  At that time Rev. J.F. Koestering was serving both Trinity in Altenburg and Concordia in Frohna, and he was not the best at keeping church records.  The marriage record for this couple cannot be found in the Concordia books.  We do have a civil record for that wedding.

Although it doesn’t look like a wedding photograph, we have this photo of Martin and Amalia Mueller.

Our German Family Tree says that this couple had 7 children baptized.  Six of the seven were confirmed; one died early.  We find the Mueller’s in the 1880 census with 4 children.

The next census to look at was not until 1900.  Also living in their household was Amalia’s sister, Christiane, who never married.

The 1910 census was the last one in which we find Amalia.

We find a parcel of land with Martin G. Mueller’s name attached to it in the plat map made in 1915.

Amalia died in 1917 at the age of 64.  I could not locate a death certificate for her, but I will show the record found in the Concordia church books.

Martin can be found in one more census, the one taken in 1920.  Amalia’s sister, Christiane, was still living in that household, and I am guessing the two men appreciated having a housekeeper living with them.

Both Amalia and Martin are buried in the Concordia Lutheran Cemetery in Frohna. 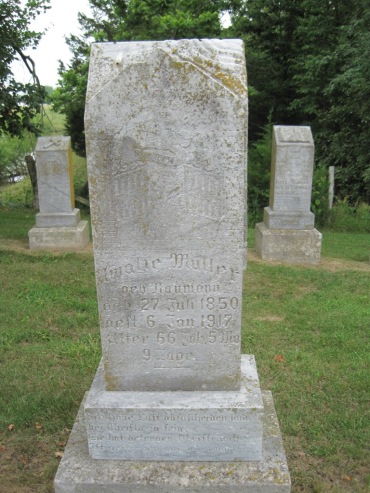 The two Martin Muellers had about an 18 year span between their two ages, with today’s Martin Mueller being the older one.  If you want to read a post about the younger one, it can be found here:  A Building in Transition.  The Naumann surname died out right away around here because all of the Naumann children in this Naumann family that lived to adulthood were girls.

2 thoughts on “Another Martin Mueller”