Emilie Hecht is today’s birthday girl.  She was born on July 28, 1862 and baptized at Grace Lutheran Church in Uniontown, Missouri.  Her parents were Wilhelm and Wilhelmine (Weber) Hecht.  Just a few days ago, I wrote about a Henry Hecht in the post titled, Fives are Wild.  That Henry Hecht would have been Emilie’s uncle.  What makes things more confusing is that Emilie also had a brother named Henry Hecht.  Below is Emilie’s baptism record.

We find Emilie in her first census in 1870, but the entry is confusing.  Emilie is living in the Herman Winter family and appears to be named Emilie (Amelia) Winter.

The 1880 census showing Emilie helped me solve this problem.

This time, she once again has the name Emilie Hecht, but she was called a step-daughter of Herman Winter.  Wilhelmine Winter was Emilie’s mother.  She had remarried after her husband, Wilhelm Hecht, had died in 1866 when Emilie was just 4 years old.   Here is a photograph of Emilie Hecht.

Emilie’s future husband was Ernst Hoehne who was born on December 19, 1857.  He was the son of Elias and Carolina (Schlimpert) Hoehne.  Ernst was baptized at Immanuel Lutheran Church in Altenburg.  The year, 1857, is when Immanuel Lutheran began after Rev. Schieferdecker left Trinity.  Ernst was just the 3rd baptism at Immanuel.  Here is his baptism record.

Just a quick side note.  Ernst’s father, Elias, had a sister, Johanne Hoehne, who married Rev. Johann Andreas Friedrich Wilhelm (J.A.F.W.) Mueller.  He was the first graduate of Concordia Seminary, Altenburg (the Log Cabin College).  He is often referred to as “Alphabet” Mueller.  Here are pictures of the siblings, Elias and Johanne.

The first census in which we find Ernst Hoehne was the one taken in 1860.

Like his future wife, Emilie, Ernst lost his father when he was quite young.  Elias died in 1866 when Ernst was just 9 years old.  Also, as in the case of Emilie’s mother, Ernst’s mother remarried.  Her second husband was William Heiner.  We see the Heiner household in the 1870 census.  When I first looked at this census, I thought Hoehne was misspelled as Heiner.  Ernst looks like he is a son of William Heiner, but he was actually a step-son.

Both Wilhelmina and William Heiner died in the 1870’s, and all of Ernst’s siblings had also died early except for one sister, Emma.  So this is what we find in the 1880 census for the Hoehne’s.  Ernst, a 21 year old farmer and his sister, Emma make up the entire household.  I have included a few neighbors for a purpose I will show later.

That brings us up to the marriage of Emilie Hecht and Ernst Hoehne (two E.H.’s).  They were married on May 8, 1881 at Trinity Lutheran Church in Altenburg.  We have the civil record for this wedding.

Below is the marriage record from the Trinity Lutheran Church books.

By the way, Ernst’s sister, Emma, would marry William Vogel in September of 1881, so that potentially awkward situation of the newlyweds, Ernst and Emilie, living in the same household with Emma would only last a few months.

Ernst and Emilie would have just two children, and only one of them would live to adulthood.  Joseph Hoehne, their firstborn, had his story told in the post, Getting ‘Em Where They Need to Go.  In 1884, their second son, Ernst Friedrich Hoehne, was born.  We have a Perry County birth record for this child.  I will show it in two images.

This baby only lived a matter of days.  I show it to display the midwife who assisted with this birth.  It was Christiane Mueller, who was listed as the neighbor of Ernst and Emma in the 1880 census.  Christiane also happens to be my great great grandmother.

We find the Hoehne household in the 1900 census.  Emilie’s mother, Wilhelmina Winter, was living with them.

The marriage of Ernst and Emilie lasted exactly 20 years.  That is because on this couple’s 20th anniversary, May 8, 1901, Emilie died.  Can you imagine losing your spouse on your 20th anniversary?  Here is her death record from the Trinity books.

Emilie can be found on Findagrave.com as being buried in the Trinity Lutheran Cemetery, but there is no photo of her gravestone.  This compelled me to make another visit the cemetery.  I found the gravestone below that I think is the one for Emilie.  It is very difficult to read.

Here is a close-up of the surname shown toward the bottom of the stone.  I think it says “Hoehne” or “Hohne”.

This gravestone is in the location where you would expect it to be found based on when Emilie died.

Ernst can be found in the 1910 census.  His son, Joseph, had gotten married, and Ernst was living with that family.

In 1914, Ernst married again on May 10th.  He was 56 years old at the time.  His second wife was Susanna Jahn.  Here is their marriage record from Trinity.

A family history on Ancestry.com claims this is a wedding party for Ernst Hoehne.  It does not state at which wedding the photo was taken.  I suspect it was his second wedding.

When the 1915 plat map book was produced, it contained some photos in the back.  One of those photos showed the Ernst Hoehne house.  I’ll leave it up to you to figure out who the people are who are standing or sitting on the porch.

The Ernst and Joseph Hoehne parcels of land can be seen on another page in that book.

The last census in which we find either Ernst or Susanna was the 1930 census.

Next, here is Susanna’s death certificate.

We can find gravestones for both Ernst and Susanna in the Trinity Lutheran Cemetery in Altenburg. 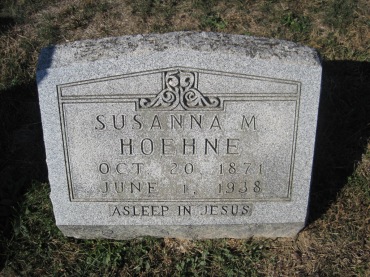 After my previous post about the Hecht’s in Uniontown, I received an inquiry from one of our regular readers, Daniel Lichtenegger, about Emilie Hecht.  I think this article may answer some of the questions that he had about Emilie.  At the time, I did not know Daniel’s connection to the Hoehne family.  Now I know.  Ernst and Emilie would be his great great grandparents, if I have it figured correctly.