Yesterday’s post focused on a portion of the passenger list of the Republik showing people from the German city of Cahla (Kahla).  I will show that image again.

It was mentioned yesterday that Mary Susanne Koeppel’s second husband was Johann Gottlieb Shau.  He was also a widower when that marriage took place.  His first wife was Louise Juliana Carolina Wirth.  Here is a transcription of a baptism record for one of their children in Germany.  It documents her maiden name as being Wirth. 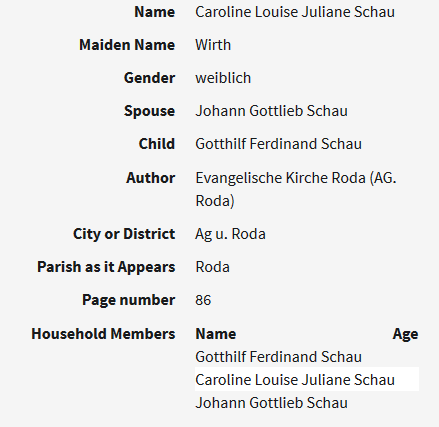 The Schau family traveled to America aboard the ship, Louise, which arrived in New Orleans on May 21, 1839.  Below is an image of that passenger list showing the Schau family.

I find the timing of this family’s arrival fascinating.  They got to New Orleans at just about the time when most of the immigrants in St. Louis were about to make the trip to Perry County in the midst of the Rev. Martin Stephan scandal.  We have some evidence that this Schau family did reside in Perry County for a while.  They would not have gotten to Perry County until after Rev. Stephan was put into exile.  The Schau family arrival was also in that time before the arrival of the Gruber Group.

We have documentation that Johann Gottlieb Schau bought property in Perry County in 1841.  I also described yesterday the birth of twins in 1842 who were baptized at Trinity Lutheran Church in Altenburg.  I think this Schau family must have moved to St. Louis before 1844.  When Juliane died in 1844, we find her death record in the books of Old Trinity Lutheran Church in St. Louis.  She died of typhus at the age of 34.

Also, when Johann Gottlieb Schau married the Widow Koeppel, that marriage took place in St. Louis and was conducted by Rev. C.F.W. Walther.

Now, let’s return to the Wirth surname.  The bottom three names in the image of the passenger list of the Republik shown above were Wirth’s.  Our German Family Tree has quite a few entries carrying the surname, Wirth.  Almost all of those Wirth’s originated at the church in Friedenberg.  They were from Bavaria.  The Wirth’s on this passenger list were not from that area of Germany, so there is probably no family connection between these two groups of Wirth’s.  However, there would be a higher likelihood that there may have been a connection between Juliane (Wirth) Schau and the Wirth’s on this passenger list from Cahla.  However, I could not find any documentation that would prove a connection.

The three Wirth’s on this passenger list, however, do provide us with some interesting stories. Carolina Wirth was the mother, and she came with two children, Wilhelm (a watchmaker) and Auguste.  These Wirth’s did not come to Perry County but remained in St. Louis after the Gesellschaft arrived.  Already in 1848, Wilhelm, the watchmaker, died of consumption (tuberculosis) at the age of 34.  Apparently, he never married.

I am going to skip ahead to the death of Carolina, the mother.  She died in 1865.  Here is her death record from Old Trinity.

I found the answer in a rather extensive family history to be found on Ancestry.com.  There was another daughter of Carolina by the name of Helene Wirth.  She arrived in America in 1841 as a widow with one child.  Her second husband, Johann Georg Friedrich Schmidt had died in September of 1839.  Perhaps these Schmidt’s intended to join the Gesellschaft in 1839, but the death of Helene’s husband changed their plans.  We find Helene and her only son, Friedrich August Schmidt, arriving in Baltimore in August of 1841.  I find it quite interesting that they had made that voyage aboard a ship called the Copernicus, likely the same ship which had brought many of the original immigrants to New Orleans in 1838-1839.  Here is the passenger list showing Helene Schmidt and her son.

After arriving in America, Helene and her son made their way to St. Louis.  Not long after arriving in that city, on November 7, 1841, she married Johann Friedrich Scheel, who had been another of the original immigrants a few years earlier.  Here is the civil record for that marriage.  Its was yet another marriage conducted by Rev. C.F.W. Walther.

By the way, I could not find any connection between Helene’s husband’s Schmidt family and the family of Georg Joachim Schmidt (my family) from Cahla.  Helene would die in 1849 right in the midst of the cholera epidemic of that year, but her death record does not list a cause of death.  The record also calls her Magdalena for some reason, but she is described as the wife of Johann Friedrich Scheel.

What is quite interesting is what happened to the son of Helene Schmidt who traveled with her in 1841.  Friedrich August Schmidt would later attend Concordia Seminary in St. Louis and become a Lutheran pastor.  He graduated from Concordia Seminary in 1857.  He had a long and quite notable career as a pastor and professor.  However, he did not remain in the Lutheran Church-Missouri Synod for very long.  In fact, according to the biography of his life found in the Christian Cyclopedia shown below, we discover that he and Rev. C.F.W. Walther were at odds with one another over the doctrine of predestination.

Here we see Rev. Schmidt with his wife, Caroline.

Rev. Friedrich August Schmidt had many children, so this would explain from whence all of Carolina Wirth’s grandchildren and great-grandchildren came.

Finally, I must say a few words about the last of the Wirth’s on the passenger list.  Auguste Wirth went on to marry a furrier by the name of Johann Traugott Bolz in St. Louis.  Her husband was yet another of the original immigrants who was part of the Gesellschaft.  She married him in January of 1841, so she was a newlywed when her sister Helene Schmidt arrived later that year.  This couple had three or four children.  One of those children, Johann Traugott Bolz, Jr., had a son who married a Mayer.  She was from the rather famous Oscar Mayer family known especially for its wieners and bologna.  I wrote a post about this family a while back titled, My Bologna Has a First Name – It’s O-S-C-A-R.

In closing, I will mention that I was tempted to tell a joke about the family ties between the Bolz family and the Oscar Mayer Company, but I figured it just wasn’t Wirth it.