I will look at a character today whose life is not very well documented.  He disappears from the records after the 1870 census when he was just 11 years old.  Yet despite that fact, he managed to become the main character of a book that has been written.  There are so many questions raised when looking at this character’s life story, but after all is said and done, the main question I have is, “Where did you go, Joe?”

Albert Adolph Joseph Estel was born on October 16, 1859, so he would have been 160 years old today.  The few census records we have use the name Joseph for this person, so I will do so also.  Joseph was the son of Emanuel and Wilhelmine (Kramer)(Nitschke) Estel.  He was baptized at Trinity Lutheran Church in Altenburg.  At least that is where his baptism record can be found.  Since his family lived in Wittenberg, he may have been baptized there, although there was no church sanctuary located in Wittenberg at that time.  Below is Joseph’s baptism record.

Let me backtrack a little.  Joseph’s parents, Emanuel and Wilhelmine, were both on ships that were part of the Gesellschaft in 1839.  Emanuel was on the Olbers; Wilhelmine was on the Johann Georg.  Wilhelmine Kramer came as a baby.  When the immigrants were arriving in Perry County, she was about to celebrate her first birthday.  Right before the Stephanites left Germany, Wilhelmine’s mother, Rosine (Kluegel) Kramer, divorced her husband, Gottfried Kramer.  There is a story that says she wanted to come to America, but her husband did not.  After getting to Perry County, Rosine married Carl Julius Otto Nitschke.  Then, when Gottfried Kramer died in Germany, it is said that his daughter, Wilhelmine, got quite a sum of money from his estate.  The part of this story that seems significant to me is the fact that when Emanuel Estel married Wilhelmine Kramer in 1856, he was marrying into some money.  We find Emanuel running a general store in Wittenberg.

Before I continue with Joseph’s story, let me point out that if you want to read more about the story of Emanuel and Wilhelmine Estel, you can find it at this link:

Joseph Estel shows up in the 1860 census.  Joseph was listed as being 9 months old.

The only other census in which we find Joseph Estel was the one taken in 1870.  He was shown to be 9 years old, which I think is inaccurate.  According to his baptism record, he should have been listed as either 10 or 11, depending on the date the census was taken.

When the 1880 census shows up, this family can be found living in St. Louis, and Joseph is not listed in that household.

A few family stories can be found concerning Joseph.  Here is one account.

This article indicates that Joseph had some trouble with the law early in his life, and deserted his family.  The note about him being in Kentucky and being married led me to look in Kentucky for some clues.  I did find an 1880 census for Smith Mill Township in Kentucky that included a Joseph Estell who was born in Missouri.  His parents are said to be born in Louisiana.  I suppose you can make the argument that Joseph’s parents entered America through New Orleans.  His age is also not quite right.

Smith Mills was located in Henderson County, Kentucky which we can see on the map below.  You can see that it is not too terribly far from Perry County, Missouri.

I also found two marriage records from Kentucky that potentially may be our Joseph Estel.  First there is this one from Clark County, Kentucky, which is farther east in that state.   I did find an America Estell who was buried in Omaha, Nebraska, and that may be significant later. 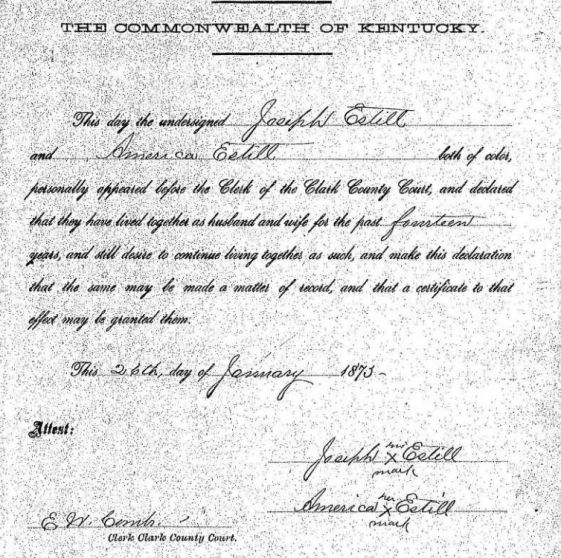 Secondly, here is another record from Kentucky, this one from Paducah.  It shows a Joseph Estell marrying S. Cherry.

Next, let’s take a look at another story from this family. 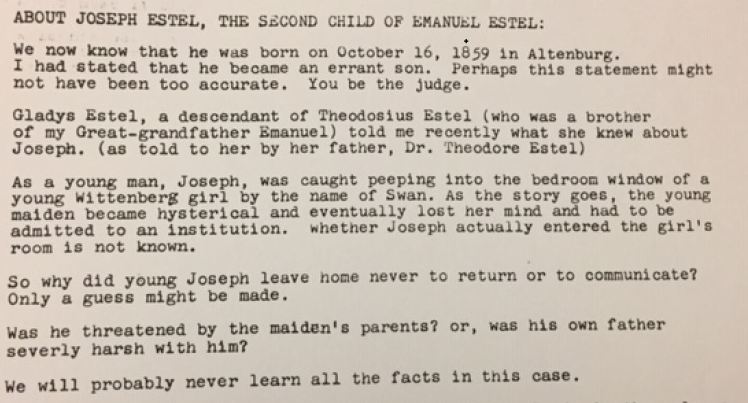 This one contains a peeping-Tom story.  It still leaves lots of unanswered questions.

At this point, let me tell you about a book that has been published which tells the story of a fictional Joseph Estel which is based upon the real Joseph Estel.  It was written by Mike Estel, who is a descendant from the Perry County Estel’s.  It is titled, Outlaw in the Family.

In the Author’s Note in the front of this book, the author states that in the course of his research, the last place he could find Joseph was in a small town in Nebraska in 1885.  That fact may give credence to the wife that was named America.

I have read this book.  The starting point of the story is an incident which takes place outside Wittenberg involving a robbery.  One of the outlaws was Joseph Estel.  Mike Estel goes on to tell the tale of Joseph mostly traveling around Missouri committing crimes.  From our perspective, we know there are events and dates in this book that could not have been correct, but they call a book like this fiction for a reason.

I have reached the end of my research for this day.  I have run into many dead ends, and I need to get this post published.  If any of our readers want to take over in an effort to find any more details, please do so and let us know if you find anything.

I do know that we have a few copies of Outlaw in the Family for sale at our museum if you’re interested in how Mike Estel attempts to answer the question, “Where did you go, Joe?”