The story today begins in Lamstedt, Hanover, Germany, where a boy was born to Barthold and Katharina (Blanck) Burfeind.  The boy’s name was Herman Heinrich Wilhelm Burfeind, and he was born on December 2, 1834.  Herman’s baptism record is shown below.

As near as I can tell, this Burfeind family came to America sometime around 1850.  It looks like they arrived as a family of six…husband, wife, and 4 boys.  Herman was the oldest son.  I was unable to find a passenger list for them.  The 1900 census gives an immigration date, but Herman did not live long enough to get in that census.  However, his brother did, and his census entry for that year says he arrived in the USA in 1850.  The first church record I was able to find for a Burfeind was the death record for their youngest son, Johann, who died in 1851 before his 2nd birthday.  That record is found in the books of Trinity Lutheran Church in Altenburg.

Then in 1856, an older brother, Johann Heinrich Burfeind died at the age of 17.  His death record is also in the books of Trinity, Altenburg.

With this death, the only two sons left were Herman and Barthold (an Ancestry.com family tree calls him Barthold Burfeind IV).  Then in 1858, the Burfeind family was cut in half.  Both the parents died in November of that year, Barthold on the 20th and Katharina on the 24th.  Their death records are right next to each other in the Trinity, Altenburg books.

That left just the two Burfeind brothers, Herman and Barthold.  In 1860, we find Barthold in a St. Louis census where he was a student at Concordia Seminary.  Barthold would go on to become a Lutheran minister and serve most, if not all, of his career in the Chicago area.  One question I have at this point:  Who paid the bills to send Barthold to the Seminary.

I was unable to find Herman in the 1860 census, but then in 1862, he got married.  His bride was Elizabeth Schuessler, the daughter of Johann Michael and Rosina (Hoppe) Schuessler.  The story of Elizabeth’s family was told by Wayne Schuessler in his post titled, The Bowl Makers of Perry County.  Elizabeth was born on September 11, 1842 and baptized at Concordia Lutheran Church in Frohna.

We find Elizabeth in the 1850 census.  Her father had died in 1849.  This image just shows several of the children.  You can see that Elizabeth was the second child born to this family in America.

Next, we find Elizabeth in the 1860 census, two years before she was married.

The marriage date for Herman Burfeind and Elizabeth Schuessler was July 24, 1862.  They were married at Concordia Lutheran Church in Frohna, Missouri.  Here is the church record for that wedding.

According to our German Family Tree, this couple had 9 children.  Only 3 of their children were boys.  The first child was baptized at Trinity, Altenburg, but after that, all the other children were baptized at Concordia, Frohna.  We find this family in the 1870 census with four children.

Ten years later we find this family in the 1880 census.  It would be the last census in which we find Herman.

Elizabeth could be seen in the 1910 census, but I choose not to display it.  She was still living with Ernst, but by that time he was married.  Elizabeth would die one year after that census in 1911.  In 1910, the state of Missouri began using the death certificates that I so often show on this blog.  Here is her death certificate.  She died at the age of 69 as the result of a brain concussion she received in a fall.  I hope you also note that Elizabeth died on her birthday, September 11th.

Both Herman and Elizabeth were buried at Concordia Lutheran Cemetery in Frohna. 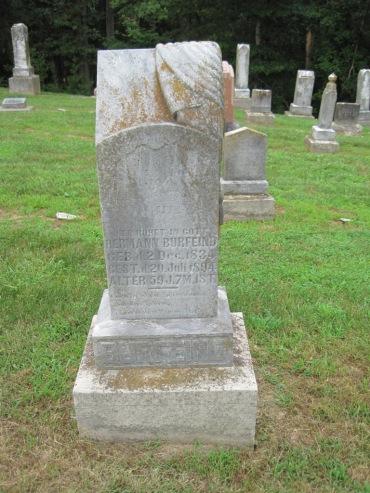 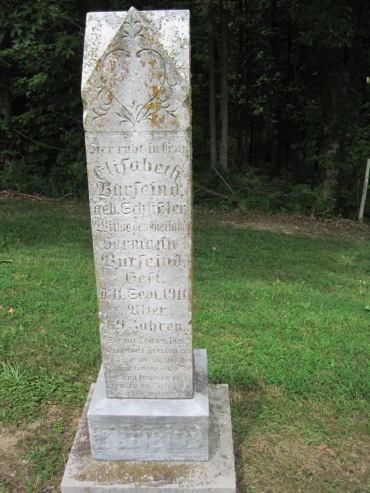 Two of the boys born into this family do not show up in church records after  confirmation.  One of them does not even have a confirmation record.  They either died early or moved out of Perry County.  The only other boy was Ernst, who is shown in a few census records above.  However, after his mother’s death, Ernst’s family moved to Jefferson County, Missouri.  Therefore, the Burfeind surname pretty much disappeared in Perry County.  Gerard Fiehler tells me that there was a recent obituary for a Burfeind who died in Cape Girardeau County, and after a little detective work, we found that he was a descendant of Ernst.

I did find another Lutheran pastor with the Burfeind surname.  He is Rev. Peter Burfeind, who is the pastor at Union City and Marshall, Michigan.  I do not know if he is related to the Perry County Burfeind’s.  Maybe someone among our readers knows.  I am going to put the photos of Rev. Barthold Burfeind and Rev. Peter Burfeind side-by-side.  Maybe you can see a resemblance.