It will take a little while to get to today’s birthday girl.  We begin by taking a look at the first marriage of Charles Wachter.  If you want a little background on the first Wachter’s to arrive in this area, you can read the post, Double Double-U.  Charles Wachter was the son of Wilhelm and Ernestine (Bodenschatz) Wachter.  He was born on April 14, 1881 and baptized at Trinity Lutheran Church in Altenburg.  Here is his baptism record.

Since no 1890 census is viewable, we have to look at a much later census made in 1900 to find Charles.  Being born in late 1880 or during 1881 caused people to wait the longest before being listed in a census, and when they were recorded, they were already around 19 years of age.  Here is the 1900 census for Charles.  Two additional Wachter children are found on the next page of the census which I did not show.

Charles’s first wife was going to be Anna Koch, who was born on April 12, 1884, so Charles and Anna celebrated birthdays just two days apart.  Anna was the daughter of Jacob and Wilhelmina (Hellwege) Koch.  She was baptized at Immanuel Lutheran Church in New Wells, Missouri.  Below is her baptism record.

I was unable to find the Jacob Koch family in the 1900 census, but in previous entries, that family had been living in Shawnee Township.  A later census shows Jacob and his family (without Anna) living in the Apple Creek Township, also in northern Cape Girardeau County.

On November 25, 1906, Charles Wachter married Anna Koch at Immanuel Lutheran Church in New Wells.  We have that church marriage record.

We also have the marriage license for this couple.

It looks like Anna’s parents (a marriage between a Koch and a Hellwege) was a couple made up of an East Perry County name (Hellwege) and a North Cape County name (Koch).  Then when Anna was married, she crossed the Apple Creek into Perry County to find her spouse.  The tables were turned.

The first census in which we find Charles and Anna was the one taken in 1910.  They had two sons by that time.  I have included the Ernst Wachter household in this image.  He was the brother of Charles and probably farming the same land that belonged to their father.  I have written a post on this blog about the family of Ernst Wachter titled, Fiehler/Wachter.  Ernst Wachter and Martha Fiehler were married the year before Charles and Anna.

Charles married again on February 22, 1914.  His second wife was Maria Doering, the daughter of Henry and Emilie (Petzoldt) Doering.  Maria was born on January 9, 1881, so she is today’s birthday girl.  She would have been 139 years old today.  We have her baptism record from Trinity Lutheran, Altenburg.

Maria was confirmed at Trinity in 1894, and Charles was confirmed in 1895 at the same church.  Because of their proximity in age, Charles and Maria spent much time going to school together and being just one grade apart from each other.

We have the church record for the marriage of Charles and Maria.  They were married at Trinity.

On the plat maps produced in 1915 for Perry County, we find parcels of adjacent land owned by Charles and Ernst Wachter.  They can be found within the red box.

The only child born in Charles’s second marriage was a daughter born in 1916.  For some reason, our German Family Tree does not indicate there was a baptism for that girl.  However, upon looking in the Trinity records, I found the baptism record for Alma Wachter.  We are going to have to get that record included in our GFT.

Finally, we see this family in the 1940 census.  This one shows that their son, Eldor, was married and living in their household.

I have two photographs which are said to picture Charles Wachter.  The first one was taken with his family posing in front of the William Wachter home.  Charles is said to be standing in the back on the far left.

The second photograph is one taken later in life which shows the Wachter siblings.  Charles is standing in the back on the far right. 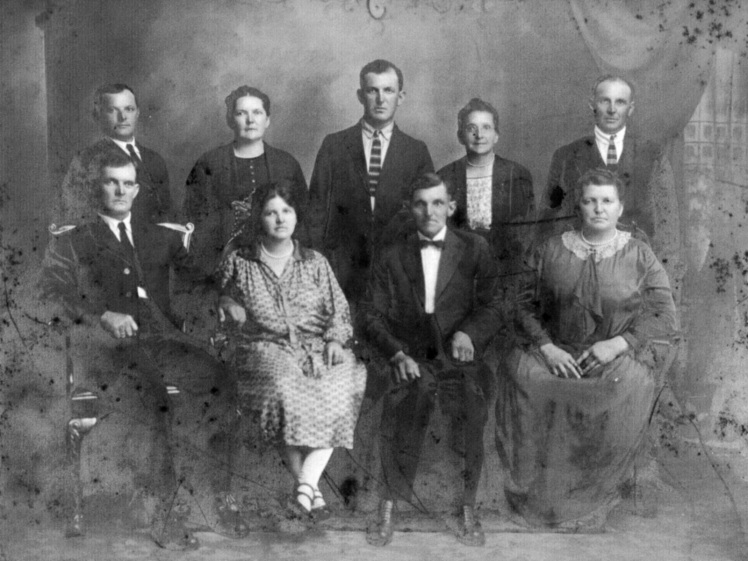 Charles died almost one year later also at the age of 65.  Here is his death certificate.

Charles and both of his wives are buried in the Trinity Lutheran Cemetery in Altenburg. 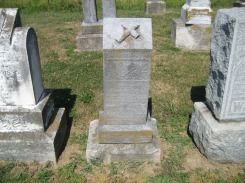 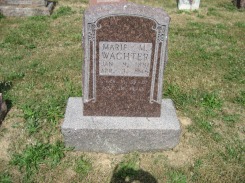 With the writing of this story, I am getting closer to finishing the stories of all the Wachter siblings.  There are several folks who live around here who still carry the Wachter surname.

In closing, let me express my thanks to those folks who have been sending me  documents and photographs that add to some stories that I have written lately.  They are not only very interesting, but I hope to be able to use them in future stories.  We love to get input on our blog posts.

One thought on “Wachter’s Koch and Doering”