I have not written many stories including the surname, Bronenkant, but when I do, I always ask myself the question, “Is it Bronenkant, or is it Bronnenkant?”  One ‘n’ or two ‘n’s’?  I see it spelled both ways.  Today, especially since both of the Bronenkant’s in this story spell it with one ‘n’ on their tombstone, that’s the way I will spell that name in this post.

The story actually does not start with a Bronenkant.  It starts with a Hecht.  Martha Hecht was born on February 1, 1874, the daughter of Heinrich and Wilhelmine (Lorenz) Hecht.  I located this photograph that shows the home of Henry and Wilhelmine Hecht. 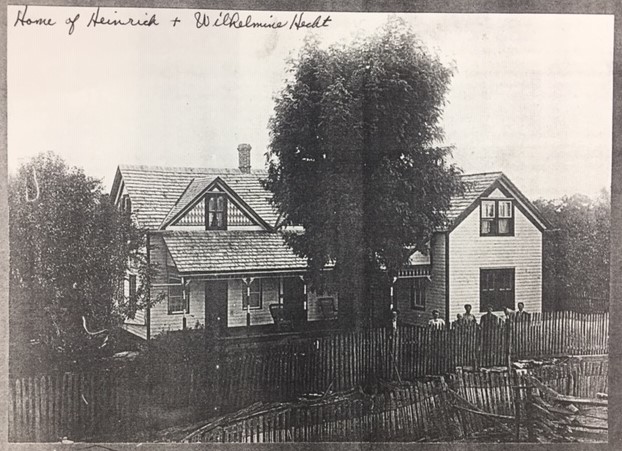 In fact, Martha was the firstborn child in the Hecht family.  There were 10 more Hecht’s born into this family later.  Martha was baptized at Grace Lutheran Church in Uniontown, Missouri.  Below is her baptism record.

Martha’s future spouse would be Martin Bronenkant, who was born on August 11, 1868.  He was the son of Gabriel and Emma (Moeckel) Bronenkant.  In fact, like Martha, Martin was the firstborn in his family and he also had 10 younger siblings.  Martin was baptized at Concordia Lutheran Church in Frohna, Missouri.  Here is an image of his baptism record.

Because he was born before 1870, we find Martin in the census for that year.  The Julia Bronenkant who was a baby in this entry was one of the main characters in a recent post, From Frohna to Fountain Bluff.

Next, let’s take a look at these two when they are listed in the 1880 census.  First, let’s look at the Hecht family who were living in the Union Township.  Martha was 6 years old.

Next, here is the Bronenkant family.  Martin was 11 years old.

On October 24, 1897, Martin Bronenkant married Martha Hecht at Grace Lutheran Church in Uniontown.  Here is the church record for that wedding.

The marriage license for this couple is also available to view.

For some reason, I was unable to locate the Bronenkant family in the 1900 census.  I do know that this couple would have 4 children, and the first one was born on their 3rd anniversary, October 24, 1900.  All of their children were baptized at Concordia, Frohna.  We see the family in the 1910 census.  Martin’s farm was located in Union Township.

Next, we find Martha and Martin in the 1920 census.  Their oldest daughter, Dora, had married Rudolph Haertling in 1919, and those two were living in the Bronenkant household.

We continue to find the Bronenkant’s in the 1930 and 1940 censuses, but each entry shows a smaller family.  Here is the 1930 census entry.

The 1940 census shows Martin and Martha with an empty nest.  They had relocated to the Brazeau Township, and a note in the margin of the census says “in Frohna”.

Martin died in 1950 at the age of 82.  He died at Southeast Hospital in Cape Girardeau, and some broken bones are listed among the causes of death on his death certificate.

Martha died in 1958 at the age of 84.  She died at Perry County Memorial Hospital in Perryville.  Here is her death certificate.

Martin and Martha are both buried in the Concordia Lutheran Cemetery in Frohna, Missouri.

In today’s day and age, with all the improvements in transportation and communication, young men and women do not always find their spouses nearby.  Back in the days of horse and buggy transportation and no phones, men and women would most often find each other close by.  In many cases, a bride and groom would be from the same congregation.  Others would be made up of a bride and groom that lived in the same neighborhood (around here that would have meant they lived on nearby farms).  I am guessing that the marriage of Martha and Martin was one of these (although I was unable to figure out where the Bronenkant farm was located).

I am a member of Trinity Lutheran Church in Altenburg, and this past year, we had a wedding that involved a bride and a groom who were both members of our congregation.  Our pastor, who has been at our church for about 15 years, said that was the first marriage he has performed between two congregation members.  My, how things have changed.

One thought on “Martha and Martin”