The most famous Walther in the history of East Perry County is Rev. C.F.W. Walther.  However, there were other unrelated Walther’s who settled in this area who spent a lot more time here.  Rev. Walther arrived in 1839 and was already gone to St. Louis in 1841.  The Walther’s who are highlighted in today’s post spent lifetimes here.

The story for today, however, does not begin in the Walther family.  It begins with an Ahner.  Sarah Wilhelmine Ahner was born on March 1, 1880, making today her 140th birthday.  The year in which she was born was a Leap Year, so Sarah just barely escaped being one of those Leap Day babies.  Sarah was the daughter of August and Anna (Lungwitz) Ahner and baptized at Trinity Lutheran Church in Altenburg.  Below is her baptism record.

Sarah managed to sneak into the 1880 census as a baby.

Meanwhile, Sarah’s future husband, Johann Heinrich Walther, was born 6 years before Sarah.  Henry was born on January 19, 1874, the son of Francis “Franz” and Maria (Weseloh) Walther.  He was also the firstborn child in that family.  Like Sarah Ahner, Henry was baptized at Trinity Lutheran Church in Altenburg, and we have his baptism record.

When the 1900 census was recorded, both Henry and Sarah were still single and living with their parents.  Here is the entry for Sarah and her family.

In the case of Henry, his father died in 1898, so we see him living in his mother’s household.  He certainly must have had to take over the Walther farm once his father died.  That household also had Rudy Lohmann in it.  He was a hired hand on their farm.  I have also shown another Walther family not far above Henry’s.  That was Herman Walther’s family.  Henry would have called him Uncle Herman, and he was running a general store nearby…the Walther Store.

On April 14, 1907, Henry Walther married Sarah Ahner at Trinity Lutheran Church.  We can view the church record for that wedding.

We can also look at the marriage license for this couple.

According to our German Family Tree, Henry and Sarah would have 5 children.  The first 3 were girls, and the last 2 were boys.  However, both boys died as infants.  Only one daughter had been born before the 1910 census was taken.  Included in their household was Henry’s mother and his younger brother, Ernest.

Henry had a World War I draft registration completed in 1918.

For some unknown reason, Henry’s family cannot be found in the 1920 census.  However, I think a photo was taken in 1920 at the occasion of Sarah’s parents’ 50th wedding anniversary. It looks like Sarah’s mother has one of those headdresses that was often worn at such an occasion back in those days.

Sarah is identified as being seated in the front on the far right.  Henry is standing behind her on the far right.  Another photograph of Sarah Walther was taken somewhere along the line.  She is pictured with her sister Johanna (Ahner) Hoehne.

We next find the Walther family in the 1930 census.  Once again, I will show some nearby Walther’s.  Also, by this time, their daughter, Esther, had married Oscar Scholl, and that family was living in the Walther household.

The last census we can view is the 1940 census.  Henry and Sarah had an empty nest.

Henry Walther died in 1956 at the age of 82.  I can display his death certificate.

Henry and Sarah Walther are both buried in the Trinity Lutheran Cemetery in Altenburg. 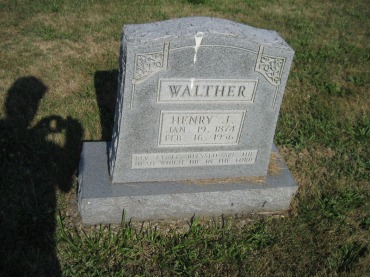 Rev. C.F.W. Walther may not have remained in Perry County very long, but both Henry and Sarah Walther were born, baptized, confirmed, married, and buried as members of Trinity Lutheran Church in Altenburg.  However, because it was only daughters born to them that survived, the Walther surname was not passed along to the next generation in this branch of that family.