We are going to be celebrating a special wedding anniversary today.  On March 3, 1870, Johann Peter Mangels married Engel Mahnken at Salem Lutheran Church in Farrar, Missouri.  That makes today their 150th wedding anniversary.  Their church marriage record is shown below.  It is just the 2nd marriage in the Salem church records on this page.

We have to go back to Lamstedt, Germany to find the early days for both the bride and the groom.  We will start with the groom, Johann Peter Mangels.  He was born on February 6, 1841, the son of Herman and Anna (Hamann) Mangels.  We have his baptism record.

This translation of the key facts in that baptism record may be helpful to you.

I will just point out that the word used after “Legitimacy”,  ehelich, means the birth was legitimate.

I am also able to display the baptism record of the bride, Engel Mahnken.  She was born on September 5, 1852 in Lamstedt, Germany.  However, her baptism record does not give her surname as Mahnke or Mahnken.  Instead, it says her name was Engel Sticht.

I will also display an English translation for this record.

You will see that Engel’s mother was Margarethe Sticht, but there is no father given.  Also, behind the “Legitimacy” category, it gives the word, unehelich, which means illegitimate.  A later 1900 census shows Engel’s parents, Claus and Margaretha (Sticht) Mahnke.  That document says that couple was married for 48 years by 1900.  That would indicate their marriage took place in 1852, the same year that Engel was born.  All indications are that Engel always went by the name, Engel Mahnke or Engel Mahnken.  That surname is another one that has alternate spellings.  Here is that 1900 census for Engel’s parents.

It is also through the 1900 census for Salem Township that we are told that Johann Peter Mangels immigrated to America in 1867.  I am not able to show a passenger list for him.  However, that is not the case for Engel’s immigration.  It is not often that I  can locate a passenger list for a person on both sides of the Atlantic Ocean.  In Engel’s case, I can display a passenger list for when she departed Germany from the city of Hamburg.  She was the only child who came to America with her parents in 1867 aboard the ship, Cimbria.

Another passenger list for this ship can be found arriving in New York City later that year.

That leads us up to the marriage of Johann Peter Mangels and Engel Mahnken on this day in 1870.  Their marriage was early enough in that calendar year for them to make it into the 1870 census as a married couple.  You can see that John is about 11 years older than Engel.

I will tell you now that engel is the German word for angel.  If you haven’t noticed already, the surname, Mangels, contains the word, angels.  I guess I’m just an old crazy German who notices stuff like that.

According to our German Family Tree, this Mangels family had 10 children.  Only 3 of them were boys, and of those boys, only one lived to adulthood.  So, the Mangels household had plenty of females.  We see some of the children in the 1880 census.

We have to skip 20 years before we can see John and Engel in another census taken in 1900.  This was that horrible document from Salem Township that is so difficult to read.  I will display it anyway.  You may be able to decipher that their son, Herman, had gotten married and was living with John and Engel when that census was taken.

Later in their lives, Johann and Engel must have had this picture made.

As it turns out, that 1900 census was the last one in which we see John Mangels.  He died in 1903 at the age of 62.  It was before the time when Missouri death certificates were used, but I will display this death record found in the Salem Lutheran Church books.

The word written in the column right after the burial date must be the German word for drowning, because that is what it says in our German Family Tree.  A notation on Findagrave.com says that John’s body was found in a pond.

Engel was still alive in 1910, but I was unable to find her in the census for that year.  I checked every one of her children, but with no luck.  She died in 1917 at the age of 64.  Her death certificate says her cause of death was liver cancer.

Both Johann and Engel Mangels are buried in the Salem Lutheran Cemetery in Farrar, Missouri. 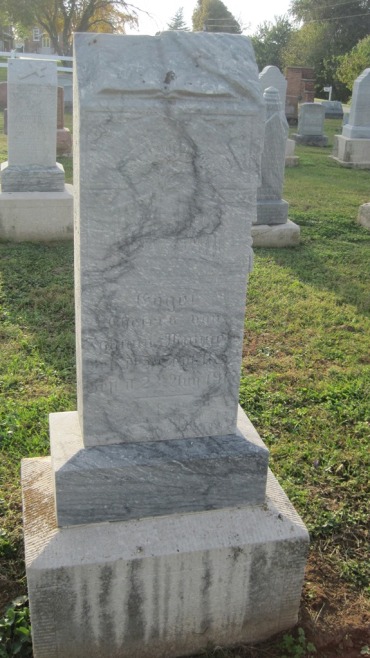 Their son, Herman Mangels had a few sons to carry on the Mangels surname.  All the girls, however, would take on the surname of their husbands.  Those surnames could be listed in a Salem, Farrar “Hall of Fame” of surnames…Versemann, Oswald, Luehrs, Miesner, Schlichting, and Weinhold.

As I write at the museum today, I’m hearing all kinds of noise outside the building.  In a few days, we should be able to let you know what is going on here.  All I can tell you today is that it is very exciting.