Samuel Martin Tirmenstein brought his family to the United States in 1839 as part of the Gesellschaft.  One of his children who also traveled aboard the Olbers was Samuel Martin Tirmenstein, Jr.  Samuel, Jr. married Dorothea Doerries in 1855, and that couple began having children.  When their first son was born, he was given the name Martin Samuel Tirmenstein.  That child is today’s birthday boy and the main character in today’s post.  I choose to call him Martin S., partly because there were other Martin Tirmenstein’s in this extended family, and I want you to be clear about today’s main character.  Martin S. Tirmenstein was born on March 16, 1858 and baptized at Old Trinity Lutheran Church in St. Louis, Missouri.

Martin can be found in the 1860 census when he was 2 years old.  His father was called a tinner.  Other later descriptions of his father described him as being a rather accomplished coppersmith.  The Tirmenstein family extends over two census pages.

Ten years later, we find Martin as a 12 year-old in the 1870 census.  His father was called a merchant of tin ware in this document.

There is one more census which shows Martin S. as a single man.  That one was the one taken in 1880.  His father had died in 1875, so his widowed mother was now the head of the household.  There is one other child listed on the next page of the census which I did not display.  Martin is called a clerk for an awning company.

Now let’s take a look at the wife of Martin S.  Her name was Clara Lange, the daughter of Charles and Louise (Brinkmeyer) Lange.  She was born on April 27, 1862, and she was also baptized at Old Trinity Lutheran Church in St. Louis.  The first census in which we find Clara was the one taken in 1870.  Clara’s father was a storekeeper for a shop that sold china and glassware.

Clara was 18 years old in the 1880 census.  You can see that Clara was the oldest child in a rather large family.

Martin Samuel Tirmenstein married Clara Lange on April 25, 1885.  They were married at Old Trinity Lutheran Church. We have this wedding photo of Martin and Clara.

Because the 1890 census records were burned in a fire, we cannot find this couple in a census until 1900.  As it turns out, that is the only one in which we find both Martin S. and Clara. This couple had 6 children at that time.  Martin S. was the general manager of Concordia Publishing House.

At this time, the Tirmenstein family lived very near Concordia Publishing House, Holy Cross Lutheran Church, and Concordia Seminary.  Here is a current map showing the address at which they lived.

Another set of photographs of Martin S. and Clara was taken around 1895. 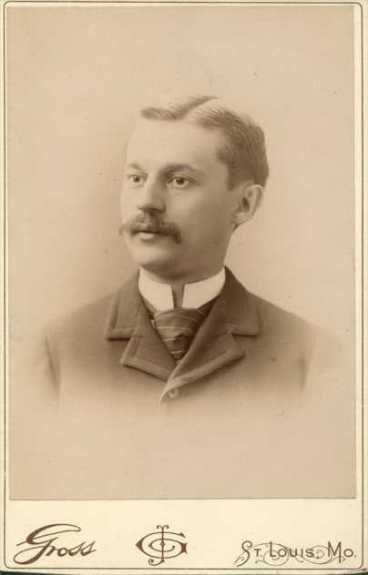 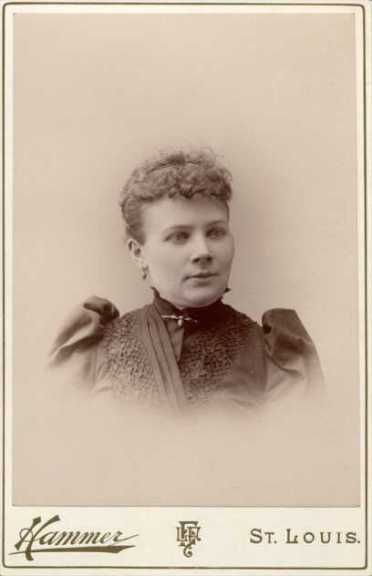 I am going to discuss the remaining lives of Martin S. and Clara before returning to Martin’s career.  Martin accepted a position in a printing company in Germany in 1907, but after traveling overseas, he died in early 1908 at the age of 49.  I found conflicting reports.  Some say he died in Germany; some say he died in Switzerland.  I think it is likely that he was buried overseas.

Clara must have moved her family to Chicago after her husband’s death, because that is where we find them in the 1910 census.

A later 1930 census has Clara living with her son, Carl Tirmenstein, in Wabash, Indiana.

Clara Tirmenstein would spend her last years in the Los Angeles, California area.  She died in 1959 at the age of 97.  She was buried in the Rose Hills Memorial Park in Whittier, California.

I found a few documents that describe the life and career of Martin Samuel Tirmenstein.  First, I am going to display several images so you can read a detailed version of his life as recorded in a book containing the biographies of famous people from St. Louis. 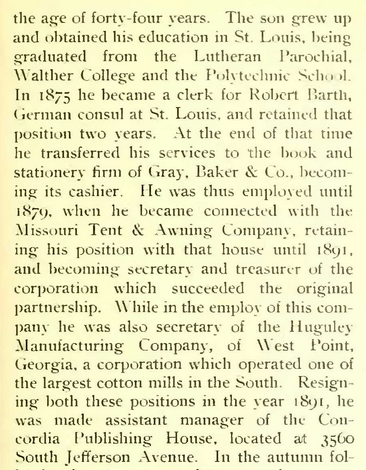 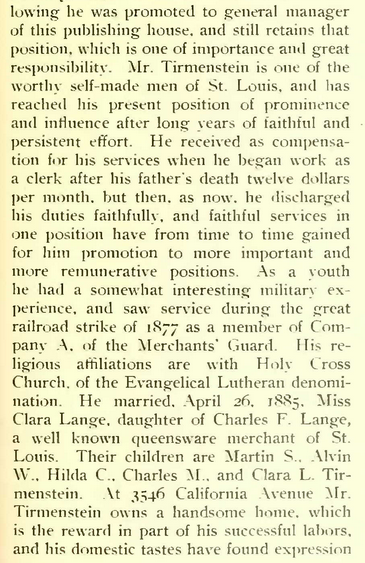 Prior to becoming the general manager of Concordia Publishing House, a scandal at that company had taken place.  Its previous manager, Martin C. Barthel, and his son had been involved in some financial impropriety.  I have told the story of Martin Barthel in the post, Martin Barthel – A CPH Original.  In a history of Concordia Publishing House written by Rev. Charles Schaum in the Concordia Historical Institute’s Quarterly, we find this description of Martin Tirmenstein’s service at CPH which also describes his death.

If you would like to read the entire article by Rev. Schaum, it can be found at the link below:

A photo of the Martin S. Tirmenstein family is shown below.  I am guessing this was taken not long before Martin’s death.

I have written several blog posts about people that descended from that original Tirmenstein family that was part of the Gesellschaft.  They always seem to present very fascinating stories, several of which were very significant to the early history of the Lutheran Church-Missouri Synod.