I decided to write a story today about a couple that got married on March 28th.  I had gotten quite a way through researching this couple before I discovered that another couple not only got married on the same day, but at the same church.  Then I took a look to see if I had written a post about the other couple.  I discovered that, not only have I written the story about the second couple, but I published that post exactly a year ago.  That previous post was about a Lichtenegger who married a Meyr, and it was titled, Lichtenegger Market.  Maybe you remember it.

These two weddings are recorded in the books of Immanuel Lutheran Church in New Wells, Missouri.  The other marriage to take place on March 28, 1910 involved a Thauwald and a Jahn.  Let’s take a look at the personalities involved in that wedding.  We start with the groom.

Adolf Richard Thauwald was born on May 14, 1886, the son of Carl and Caroline (Schneider) Thauwald.  Adolf was baptized at Grace Lutheran Church in Uniontown, Missouri.  Below is his baptism record.

When we look at children that were born in the 1880’s, we do not get to see them in a census until the one taken in 1900.  Adolf was 14 years old in 1900, and we find him in an amazing situation.  First of all, he was already “working out” as a farmhand in the household of Martin Roth.  Martin’s wife, Mary (Rudert) Roth, was the daughter of one of Adolf’s baptismal sponsors, Ernst Rudert.  We see Adolf in this entry from the 1900 Brazeau Township census.

That was also the year that Adolf was confirmed at Grace Lutheran Church.  This blows my mind.  Times have really changed.  Nowadays, we wouldn’t ever consider having a 14 year-old who wasn’t going to school, not living at home, working as a farmer, and getting confirmed all in the same year.

Next, let’s take a look at the bride.  Louise Jahn was born on November 29, 1886, the daughter of Oscar and Alwine (Petzoldt) Jahn.  Louise was baptized at Immanuel Lutheran Church in Altenburg, but her baptism record says she was born in New Wells.

Louise’s father died in 1893 when she was quite young, so when the 1900 census was taken we see this situation.

Alwine Jahn is shown as being a farmer, having 4 daughters and one son, who was only 7 years old.  This must have been a very difficult time for this Jahn family.

That leads us up to the marriage of Adolf Thauwald and Louise Jahn on March 28th, 1910.  They were married, as were the Lichtenegger/Meyr couple, at Immanuel Lutheran Church in New Wells.  Below are the church records for these two weddings.

We can also view the civil marriage license for the Thauwald/Jahn marriage.

These two can already be found together in the the 1910 census.  However, the census taker seems to have had some difficulty recording the information for this household.  They were living with Louise’s family in Shawnee Township, but Louise was still identified as being Louise Jahn, yet Adolf was described as a son-in-law.  Apparently aware of the mistakes, a notation and an arrow were inserted to explain the situation.  I think the notation, NH, may mean “new husband”.  Perhaps the census taker had filled out this form before the wedding, and then realized the circumstances had changed and made corrections before he submitted all his forms.

In 1918, Adolf had his World War I draft registration completed.

According to our German Family Tree, Adolf and Louise had three children, all girls.  Also, all three of the girls’ names had a common characteristic.  They were all four-letter names that ended with an “a”:  Olga, Rosa, and Nora.  We find all three in the 1920 census.

Next, we find this family in the 1930 census.  Adolf still had a houseful of females.  He was a farmer all his life.

The last census we can view is the 1940 census.  Their daughter, Nora, had married Edgar Lungwitz, and they were living in the Thauwald household.

Adolf had to complete a World War II draft card in 1942 even though he was already 55 years old.

The above form says that Adolf’s mailing address was the Star Route out of Altenburg in Perry County even though he lived in Cape Girardeau County.  Some people in Shawnee Township still get their mail delivered out of the Altenburg Post Office.

Louise Thauwald died in 1969 at the age of 82.  Perhaps next year, we will be able to view death certificates from that year.  As it is, we can only see them up to the year 1968.  Adolf died in 1973 at the age of 87.  These two are both buried in the Immanuel Lutheran Cemetery in New Wells. 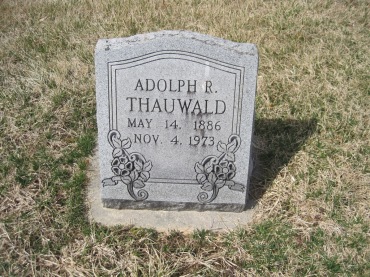 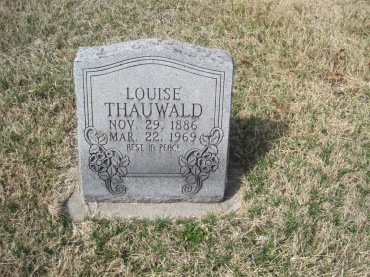 The double wedding in New Wells in 1910 causes me to ask several questions.  Did the two weddings take place at the same time or at different times of the day?  If they happened at the same time, were there any family ties that connected the names Lichtenegger, Meyr, Thauwald, and Jahn?  Did Rev. Winkler attend both of the parties that may have been held on the occasion of these two weddings?  I checked.  March 28th was a Monday in 1910.  At least, the pastor wouldn’t have to use the excuse that he had to get home early in order to be ready for a Sunday morning worship.