I am writing the story of some characters that did not have very long lives today.  Normally, I cannot find enough information on such people and end up picking a different story, but that is not the case today.  This story contains two interesting characteristics.

We will be looking at the story of Benjamin Fiehler, who was married on this day in 1917 to a girl by the name of Frieda Miesner.  Let’s start with Benjamin.  He was the son of Benjamin and Bertha (Doberenz) Fiehler on September 4, 1894.  He was baptized at Concordia Lutheran Church in Frohna, Missouri.  Here is an image of that record.

Benjamin was the person who was born after his father died.  His father, Benjamin, Sr. had died on January 6, 1894.  That fact is even noted on the above baptism record.  That means that when Bertha lost her husband in January, she was pregnant with her 11th child.  It was early enough in her pregnancy that she may have not been aware of it when his funeral took place.  Needless to say, not only did Benjamin, Jr. not get an opportunity to know his own father, but his father never got to see his last son being born.

In the 1910 census, we find a 15 year-old Benjamin working on the Gerhardt Mangels farm and living in his household.

Next, let’s take a look at Benjamin’s first wife.  Frieda Miesner was born on July 8, 1896, the daughter of Friedrich and Sophia (Korte) Miesner.  We have photos of Frieda’s parents.

She was the last child in her family if you ignore a later stillborn child.  Frieda was baptized at Salem Lutheran Church in Farrar.

She can be found in two censuses before she got married.  Here is the first one taken in 1900.  Frieda was just 3 years old.

That leads us up to the wedding of Benjamin Fiehler and Frieda Miesner.  The ceremony was held at Salem Lutheran Church in Farrar.  Here is the church record for that event.

We can also view the civil marriage license.

Take a look at the wedding photograph for this couple.

Ben and Frieda had two sons, Rupert and Clennon.  We find this family in the 1920 census in which we find Benjamin working as a farmer.

Not even one month after this census was recorded, Frieda died.  She also died just 17 days after the birth of Clennon, who was born just after this census was taken.  So, both Rupert and Clennon would have no memory of their mother.  The date of Frieda’s death is also noteworthy.  She died on February 29th, Leap Day, in 1920.  We have her death certificate.

If you read the note at the bottom of the wedding photo above, you will see that Ben’s sister, Martha Fiehler, would help raise the two boys until Ben married a second time in 1925.  His second wife would be Clara Kaufmann.

Clara Kaufmann was the daughter of Henry and Pauline (Bodenschatz) Kaufmann.  She was born on June 15, 1897 and baptized at Trinity Lutheran Church in Altenburg.  She was also a twin.  Her twin brother was Adolph Kaufmann.  Here is the baptism record for those twins.

Clara can be found in 3 different censuses before she married Benjamin Fiehler in 1925.  Here is the one for 1900.  She and her brother were also the youngest children in their family.

Next, we find Clara in the 1910 census. Her father had died in 1909 when Clara was just 11 years old, so we see Pauline is now a widow.  Pauline’s son-in-law, Rudolph Popp, was likely running that farm along with the hired hand, Fred Schroeder.

Then we find Clara in this 1920 census entry.  The household consisted of just Pauline and her twin children.

On November 15, 1925, Benjamin Fiehler married Clara Kaufmann.  We have the marriage license for this couple.

Although the license was issued in Perry County, the form says the marriage took place in St. Louis at St. Peter’s Lutheran Church.  That explains why we do not find this marriage record in any local church books.  This leads me to think that Clara had moved to St. Louis to find work after the 1920 census.  The Fiehler Family Book that we have in our research library contains this page containing information about Ben’s second marriage.  It says these two were married in Perryville, but I think that is incorrect. 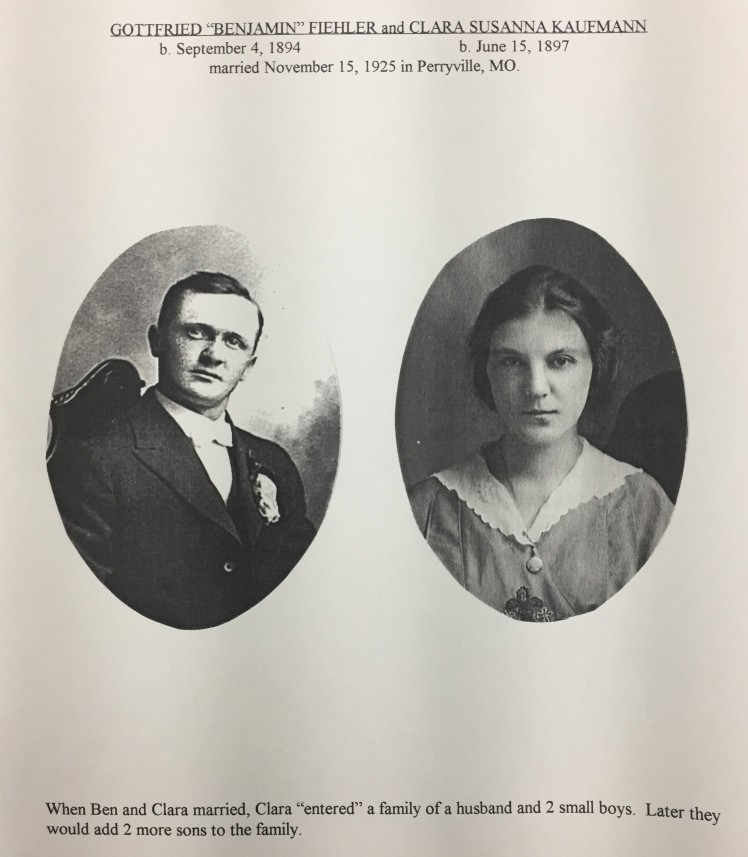 A photo of Ben and his siblings was taken at his mother’s house.  Several of his siblings lived in other states.  I am guessing this photo was taken on the occasion of their mother’s funeral which took place in 1921.  Ben is sitting in the front on the left.

Ben and Clara would have two more boys, Howard and Edward.  Let’s take a look at the 1930 census which includes all four boys.

Ben was a member of the Frohna Band which can be seen in the photo below.  Ben is the second from the left in the back row holding a baritone.

At one time, Ben was a partner in the Altenburg Garage, but he later sold his portion of the business to his brother, Joseph Fiehler.

Benjamin died in 1945 at the age of 50, so he also died at a rather young age.  We can also look at his death certificate.

Benjamin and both of his wives are buried in the Concordia Lutheran Cemetery in Frohna. 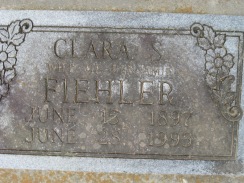 The Fiehler Family Book also has photos of all 4 of the Fiehler boys that were sons of Benjamin.  Here are the ones born to Frieda.

And here are the two boys born to Clara.

I had the occasion to meet Howard Fiehler when I moved to East Perry County.  He was a good storyteller who had that old-time Perry County German dialect.  I heard him tell several stories that I never understood.  He would preface those stories by saying they were better told in German, so that’s what he did.  I do know that when he got to the punch line, the old-timers he was telling would break out in laughter.  On those occasions, I realized that I should have paid better attention during the German classes I took in high school.