Herman Tiedemann and his wife, Margaretha brought their family to America in 1874.  At that time, their family consisted of 3 daughters.  They traveled to America aboard the ship, General Wender.  Here is the passenger list showing this family.  I have to display it in two images.

I have photographs of Herman and Margaretha Tiedemann. 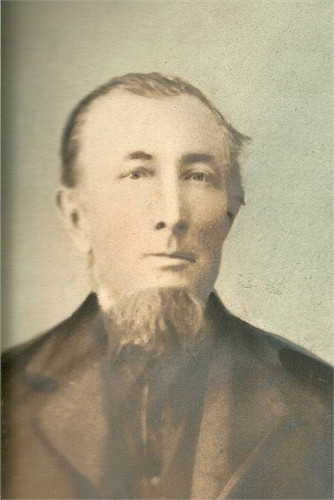 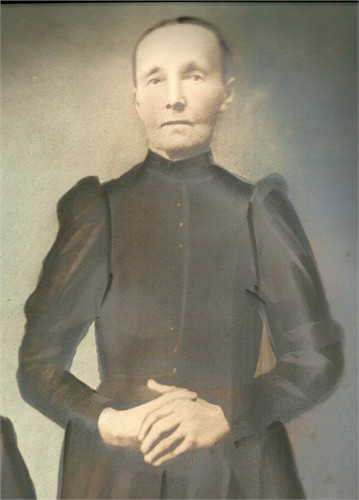 Herman and Margaretha Tiedemann were from the Hanover area of Germany.  I found evidence that Herman was from Lamstedt.  However, in the case of Margaretha, I found some dispute among different Ancestry family trees that said she was either a Sticht or a Luehrs.  Those are both names common in the Lamstedt vicinity also.

The Tiedemann’s settled in Shawnee Township in northern Cape Girardeau County.  After their arrival, they had two more children.  One of them was Henry Tiedemann, their only son and one of the main characters in today’s story.  Henry was born on December 20, 1876 and baptized at Immanuel Lutheran Church in New Wells, Missouri.  Another sister was born in 1879.  I believe one of the daughters that came on the ship in 1874 must have died not long after getting to America.  So, we see the following family household in the 1880 census.  Henry was 3 years old.

Henry’s future wife would be Lina Mirly, the daughter of Matthias and Maria (Lehner) Mirly.  Lina was born on January 17, 1878 and baptized at Immanuel Lutheran Church in New Wells.  She was child #10 in a family of 10, making her the baby of the family.  We find Lina in the 1880 census at the age of 2.

Henry Tiedemann married Lina Mirly on May 30, 1898 at Immanuel, New Wells.  Today would have been their 122nd anniversary.  We can take a look at their marriage license.

Our German Family Tree lists 5 children born to Henry and Lina, 3 of which were boys.  Their first child, a daughter named Margaretha, was born in 1899, so she shows up in the 1900 census.  The Tiedemann family is listed right next to Lina’s brother, William Mirly, and his household, which included her father, Matthias, who was a widower.  I am thinking that Henry Tiedemann and William Mirly were farming together on the same land.

The family was up to 4 children by the time of the 1910 census.  This time, it was Henry’s father living in his household.  His mother, Margaretha, had died in 1908.

One more boy was born to Henry and Lina in 1913.  In 1918, Henry had his World War I draft registration completed.  Henry was a farmer all his life.

The next census in which we find this Tiedemann family was the one taken in 1920.  Their entry spilled over two pages.

This Tiedemann family was already getting smaller by the time of the 1930 census.

The last census entry we can view is the one taken in 1940.

Henry Tiedemann died in 1955 at the age of 78.  We can view his death certificate which indicates he died at Southeast Hospital in Cape Girardeau.

Later in her life, Lina Tiedemann had a photograph taken which included four generations, with Lina being the oldest.

Back row: Murla Moore and her mother, Hilda (Tiedemann) Gross

Lina Tiedemann died in 1962 at the age of 84.  Her death certificate also says she died at Southeast Hospital.

Both Henry and Lina Tiedemann are buried in the Immanuel Lutheran Cemetery in New Wells. 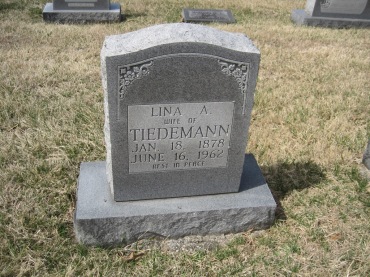 One thought on “Keeping the Tiedemann Name Going”