I am sharing a fascinating story today about a wandering Wunderlich (actually two Wunderlich’s).  August Christian Wunderlich’s life history will take us on a journey around the country only to end up back in this area.  I will especially focus on one particular event which involved a pastor who moved his congregation to another state.  You don’t hear that kind of story every day.

August Christian Wunderlich was born on August 3, 1872, the son of Johann Gottlob and Maria Josephine (Bendel) Wunderlich.  He was the 7th of 9 children in that family.  He was baptized at Immanuel Lutheran Church in New Wells.  Here is his baptism record.

August can be found in the 1880 census at the age of 8.  Please also note a younger brother, Paul, who will show up in this story later.

August went on to become a Lutheran pastor and was serving a congregation in Hemingford, Nebraska.  In 1897, he married Anna Wohlers.  About all I was able to determine was that Anna was born in 1870 in Germany, and her father’s name was Henry.  We find some of this information on this Nebraska marriage license for this couple.  These two were married on February 25, 1897.

The first child, Meta, was born to this couple, probably in early 1899.  The Wunderlich’s must have returned to New Wells for a visit.  Meta died on July 18, 1899.  There is a death record for Meta in the Immanuel, New Wells books that says Meta’s father, Pastor Wunderlich, was from Hemingford, Nebraska.

At this time, the Wunderlich family was about to begin quite an adventure.  They probably returned home to New Wells for a visit prior to making a move to Wyoming.    Let me set the scene.  Hemingford, Nebraska had been suffering several years of drought, and the members of Rev. Wunderlich’s congregation were suffering greatly.  In late 1898, Pastor Wunderlich heard about a potential settlement that was about to develop in Wyoming where some folks were planning to dig a canal to provide irrigation for some prospective farmland.  Here is a photo of what became known as the Bench Canal.

August took a trip to that area to inspect it, and came back to Nebraska with information for his members.  August and about 30 of his flock decided to make a move to Wyoming and be part of this development.  I am guessing his family made a quick trip to Missouri before making that move.  In the fall of 1899, Rev. Wunderlich and the 30 others from Hemingford, Nebraska arrived in Wyoming.  The map below shows the relative locations of Hemingford, Nebraska and what is now called Emblem, Wyoming.  Emblem is not far from Yellowstone National Park.

When this settlement began, it was first called Germania.  Most of the early residents were German Lutherans.  They also established a congregation called Zion Lutheran Church.  Because of the lack of timber, their first church was an adobe structure.  Here are some photos of that first church. 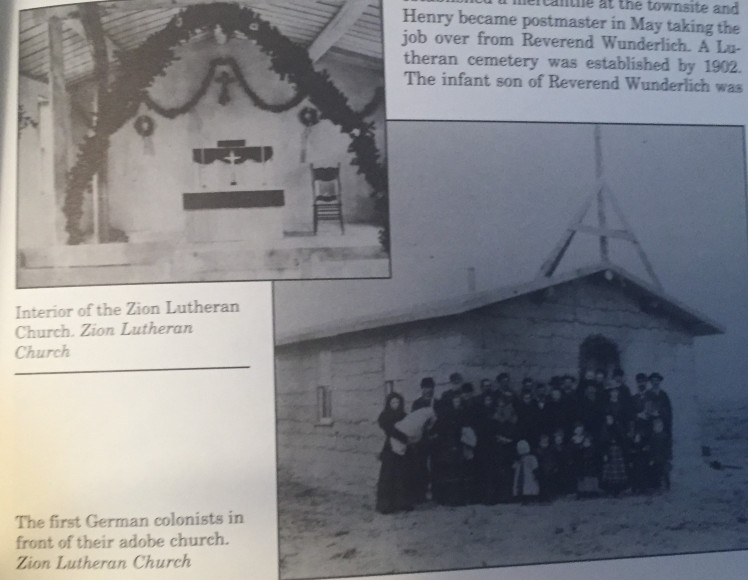 We find the Wunderlich family in a Wyoming census in 1900.  Two children, one born in Nebraska, are shown in this entry.

Shortly after the above census, this photo below of the Wunderlich family must have been taken. 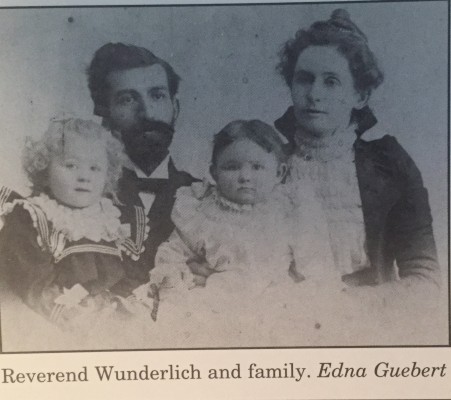 August’s brother, Paul, spent some time in Wyoming as well.  He can also be found in the 1900 census in that state.

In 1905, Rev. Wunderlich resigned as pastor because he wanted to spend more time improving his farming operation.  The next pastor was Rev. Germeroth.  In 1908, an new wood-frame church was built.  We have a photo of that church being constructed. 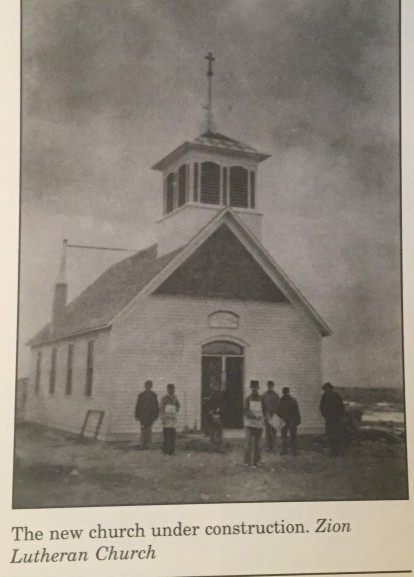 Here is a picture showing Rev. Gerberoth and his students. 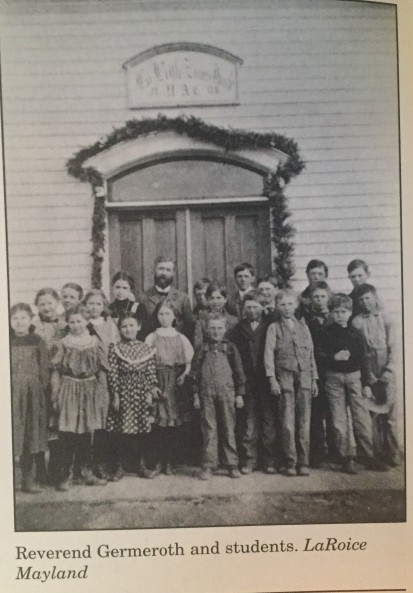 We find the Wunderlich household still living in Wyoming in the 1910 census.  I figure they must still have lived near the church because right below their household is that of Rev. Germeroth.  There were three daughters in August’s family at this time.

August and Anna had a son, Walter, in 1902, but he died in 1903.  His gravestone is likely the first one in Zion Lutheran’s cemetery.

In 1911, Anna Wunderlich died, leaving August as a widower.  She, too, was buried in the Zion Lutheran Cemetery.

Before I move on to the rest of the story, let me give credit for much of the information and many of the photos concerning the Wyoming portion of August’s life to Jeannie Cook.  Her book is called “Wiley’s Dream of Empire”.  It was provided to me by Carol Wunderlich, our historical society’s secretary, and wife of Duane Wunderlich, who is a grandson of Rev. Wunderlich. 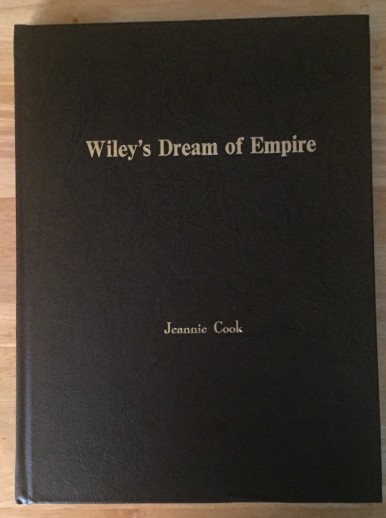 One other thing.  At about the time of World War I, the village of Germania changed its name to Emblem, Wyoming because of anti-German sentiment at the time.

I am not sure when, but August eventually moved away from Wyoming.  The next record I found for him was a marriage record which is located in the books of Old Trinity Lutheran Church in St. Louis.  On April 18, 1917, August Wunderlich married Lydia Kluegel.

Lydia Kluegel was born on June 6, 1884, the daughter of Traugott Johann and Marie (Steinmeyer) Kluegel, so she is today’s birthday girl.  Traugott Kluegel was a son of George Kluegel, whose story was written in the post, Piano Man.  Traugott was the president of the T.J. Kluegel Carriage & Wagon Manufacturing Company in St. Louis.  Lydia was baptized at Old Trinity.  Here is her baptism record.

When the 1920 census rolled around, we find the Wunderlich household living in Kansas City where August is described as a traveling agent for the railroad.  Daughter, Palma, is called a private school teacher.  A son, August, Jr., had been born in 1919, but his age must be wrong on this entry.  August, Jr. was Duane Wunderlich’s father.

August reentered the Lutheran preaching ministry sometime before the next census.  In 1930, we find his family living in Loutre, Missouri.

That brings us to the 1940 census and also back to his roots.  We find him living in Altenburg.  He is called a pastor, but he was retired when he lived here.  He was not serving a local congregation as their pastor.

Lydia Wunderlich died in 1973 at the age of 89.  She died too recently to view her death certificate.  Both August and Lydia Wunderlich are buried in the Trinity Lutheran Cemetery in Altenburg. 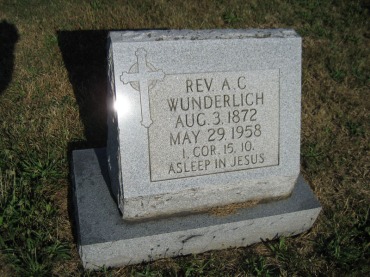 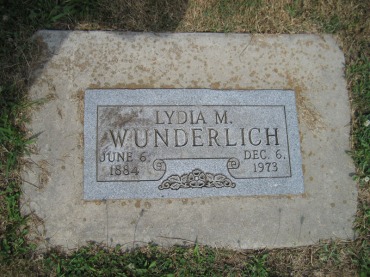 Duane and Carol Wunderlich took a trip to Wyoming a few years back and have shared some photos from that trip with me.  I can now share them with you.  Before I share a gallery, let me show you a photo they took of the baptismal font from Zion Lutheran Church in Emblem, Wyoming (on the left) next to one that we have in our museum from St. Paul’s Lutheran Church in Wittenberg. 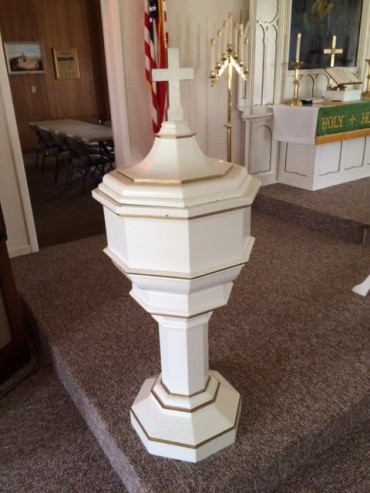 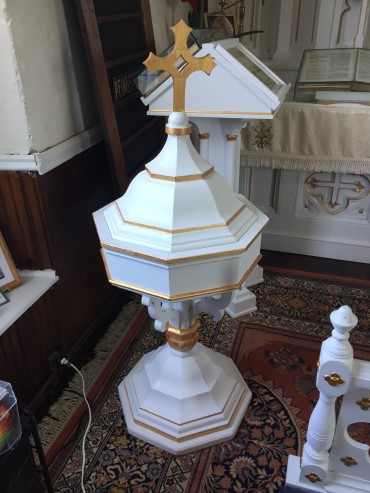 The gallery below shows some pictures of the present church in Emblem, the cemetery, and other scenes.  The gentleman in a few photos is Duane Wunderlich.  Carol is not in the photos because she was the photographer.

Duane and Carol are also my neighbors.  In addition, Duane is quite a craftsman with a scroll saw.  His intricate crosses and other crafted items are for sale in our museum’s gift shop.