I do not often use a baptism date as a starting point for a blog post, but today will be one of those days.  I just could not resist telling the story of 6 baptisms that took place on this date 160 years ago.  Those baptisms included a bunch of cousins who either traveled quite a distance to be baptized, or the Lutheran pastor traveled that distance to perform those baptisms.  Four additional baptisms will also be discussed before this article is all said and done.  They were performed on a few other days other than July 6th in 1860.

Let’s take a look at the first group of baptisms, all of which are included in the books of Immanuel Lutheran Church in New Wells.  They all took place on July 6, 1860.  All of the children being baptized were born between 1858 and 1860.

Printed vertically, you will see a note that you may be able to read more easily by looking at the image below.

Translated, the note says the people baptized were from Castor River (the name of the river was slightly misspelled).  From what I have been able to ascertain, they were likely from an area near the town of Zalma, Missouri in Bollinger County.

Two surnames dominate these 6 baptism records…Pape and Fischover.  Pape didn’t look much like a German name to me, but it is.  I even located a Lutheran baptism record for one of the Pape’s that took place in the Hanover area of Germany.  Pape’s and Fischover’s arrived in America in the late 1840’s and early 1850’s.  Here is a passenger list for the ship, Uhland, that arrived in the United States in 1847.  Marie Pape, the 47 year-old on the list, had a maiden name of Picker, so the other Picker on the list was a relative of hers.

A year later, in 1848, some more Pape’s and a Fischover arrived in America aboard the ship, Rapid.

Then, in 1851, some more Fischover’s arrived on the scene aboard the ship, Stephanie.  There was also a Wolpers in among the Fischover’s.  He would marry Amalia Fischover (found right under his name) after their arrival in this country.

Two Pape brothers, Erich and Henry, married two Fischover sisters, Doris and Henrietta.  The first child at the top of the baptism list, Conrad, was a son of Henry and Henrietta Pape.  His obituary tells some of his life history.  His birthday in the obituary is one day different from the one in the Immanuel records.

The next two children on the baptism list were Daniel and Erich Pape.  They were sons of Erich and Doris Pape.  I have an image of the father, Erich Pape, who was a soldier in the Civil War not long after these baptisms took place.

Erich Pape, Jr. did not live long enough to get married.  He died in 1873 in his teens.  Here is his gravestone in the Zalma Cemetery.

I was not able to find any further information on the life of Daniel Pape.

The next two baptisms were children of John and Doretta (Pape) King.  The children’s names were Adolph and Louise.  Doretta was a sister of the other two Pape brothers.  John King came to Missouri from North Carolina.  His obituary gives some information about his life.  The date of birth does not coincide, but I think it is the right person. 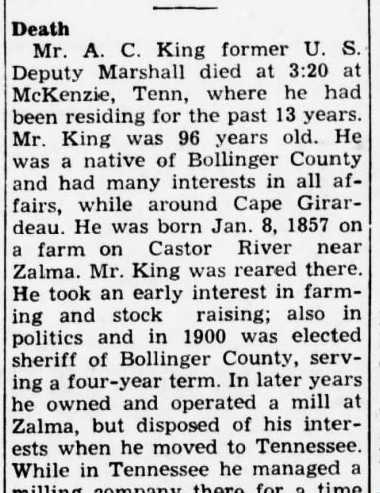 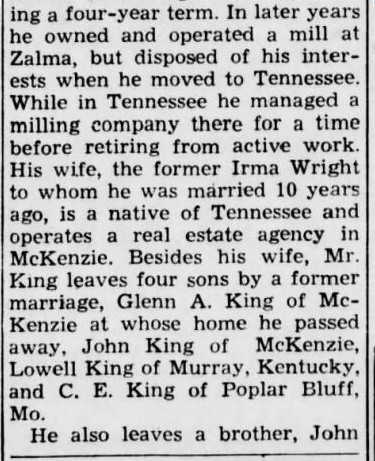 Louisa King married William Killian.  She was only 29 years old when she died, and she is buried in the King-Hinkle Cemetery outside Zalma, Missouri.

The next child on the baptism list is Johann Friedrich Gabe.  No birth date is given, nor names of his parents.  He may have been a man called Frederick Caby who lived in Bollinger County.  His father died in 1859, not long before this baptism took place.  His mother’s death may have taken place around that time also.  If it is this man, he died in 1888.

The last of the 6 baptisms was a child named Theobald Bullinger (probably spelled Bollinger).  He was the son of Daniel and Nora (Fischover) Bollinger.  If I have this figured correctly, Daniel was the brother of the Bollinger who established the historic Bollinger Mill.  I found some other children born to Daniel and Nora, but not one born in 1859 named Theobald.  I am thinking this child might have died early.

Right underneath the 6 baptisms from July 6, 1860 are other baptisms that I want to discuss briefly.

These baptisms occurred later in 1860 and were also from the Castor River vicinity which was in Wayne Township of Bollinger County.  Meta Wolpers was the daughter of Heinrich and Amalie (Fischover) Wolpers, a couple that was mentioned pertaining to a passenger list earlier.  I couldn’t find much on Meta, but one Ancestry family tree suggests she married Joel Weyant and lived in Kansas.

Next, we find Louisa Pape, the daughter of Adolph Pape.  Her mother would have been Luticia Hoover.  Louisa married a man named McMinn, and later a man named Whitener.

The last two baptisms were also from Wayne Township, but I do not think they were related to the Pape or Fischover families.

These baptisms happened at a time in the early history of Immanuel Lutheran Church in New Wells.  In 1860, Rev. C.W.R. Frederking was the pastor of this congregation.  My best guess is that these children were brought to New Wells to be baptized in a Lutheran church, and that was probably because the Pape and Fischover families were Lutheran.  The fact that so many of the sponsors on these lists were parents of other children who were also baptized on that day, I think these baptisms happened in New Wells.  If Pastor Frederking had made the trip to Zalma, I think a greater variety of friends and relatives would have been sponsors.  I find it pretty amazing that so many children from these families were born between 1857 and 1860.

From the evidence I found when studying these families, it looks like they remained active in a church, but not in a Lutheran church.  That area of Missouri is not a place to find many Lutherans even to this day.