A baby born on this day in 1874 was given the name Reinhold Ernst Dietrich Lueders.  It is his story I tell today, but it apparently wasn’t long after he was born that he took on the name Richard Lueders.  His parents were William and Theresia (Lehner) Lueders, and I have previously written several blog posts about children in this family.  Richard was born on July 7, 1874, and his baptism record can be found in the books of Trinity Lutheran Church in Altenburg, Missouri.  An image of that baptism record is shown below.  This is the only church record we have for Richard for the time period when he was growing up in Perry County.

This child is already called Richard in the first census in which he appears.  Here is the entry for the Lueders household in the 1880 census.  Richard was 5 years old.

That was the only Perry County census in which we find Richard.  I have no documentation for it, but I am guessing that in his later teens, Richard went off to Addison, Illinois to prepare to become a Lutheran school teacher.  However, before we get to his 1900 census, we need to discuss his marriage.

I could not find documentation for it, but it looks as if Richard Lueders married Catherine Valbrecht around 1897 in Palmyra, Missouri.  That was the hometown of Catherine, who was born on March 10, 1879.  She is found in the 1880 census for Palmyra at the age of 1.  The entry spills over two census pages.

That was the only census in which we find Catherine as a single woman.  Here is where things get a little puzzling.  Let’s take a look at the 1900 census which places this family in  Allen County, Indiana where Richard was a school teacher.  This was in the Fort Wayne area.  The family had the only two children they would have by then.

Perhaps Catherine Lueders had for some reason returned to her hometown to have her second daughter.  By the way, a similar Social Security record can be found for the older daughter, Marguerite, which says she was born in Fort Wayne.

Richard Lueders was not a school teacher for very long.  As early as 1909, we find him living in Hannibal, Missouri, close to his wife’s hometown of Palmyra.  This 1909 city directory for Hannibal shows this family living there.  Richard was a clerk.  Sonnenberg & Meyer was a dry goods store.

The 1910 census shows this Lueders household.

This entry in the census is very difficult to read.  Here is an enlargement of the columns referring to Richard’s occupation.  Once I found out that Sonnenberg & Meyer was a dry goods store, I could decipher the second column as “dry goods store”, but that first column is still a mystery.  Perhaps “salesman”?  When I showed this record to my wife, she responded, “They should have hired census takers who had good penmanship.”

Between this census and the next, there were other developments involving this family.  First of all, sometime during this decade, Leanore Lueders married John G. Hoback.  One child was born to this couple, John Richard Hoback.  Leanore’s husband went off to be trained for World War I, but while at Ft. Hood in Texas, he contracted the Spanish flu and died.  Here is his death certificate.

Three months after John Hoback’s death, his son was born.  So, when her husband died, Leanore was pregnant.  When the 1920 census came out, we find the following Lueders household.  Leanore and her young son were living with Richard and Catherine.

Not long after this census was taken, we find this family had moved.  In a 1921 city directory for York, Pennsylvania, we find this couple.  Richard was called an accountant for the Steacy Schmidt Manufacturing Co.

The 1930 census shows the Lueders household in York.  Richard Hoback was living in their household, but his mother was not.  As near as I can tell, Leanore was married again around 1927 to Donald Ketterman.  They were also living in York in 1930, but Leanore’s son was not living with them.

A 1931 city directory for York shows a listing for Richard Lueders and his daughter, Marguerite.

Richard Lueders died in 1936 at the age of 61.  Catherine can still be found in the 1940 census along with her daughter Marguerite, who was still unmarried.

The 4-generation photo shown below is said to have been taken in 1946.  Catherine is on the left; Leanore is on the right.  John Richard Hoback is holding his young child, James Hoback.

Catherine Lueders died in 1955 at the age of 76.  Richard and Catherine are both buried in the Prospect Hill Cemetery in York, Pennsylvania. 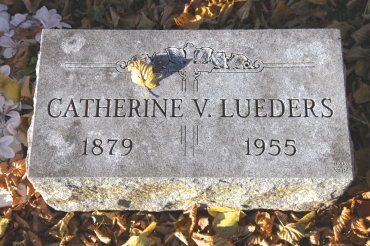 Richard Lueders took us for quite a ride.  It took us from Missouri to another state, back to Missouri, and then off to yet another state.  It also displays a variety of his occupations over the years.  His story also has been beneficial to me.  I now think I may have to weave him into my next book, Wittenberg ’04 since his brother Otto is getting married in that year.

I took a photo of a worker getting an early start on some welding this morning.  His job is going to be getting more uncomfortable as the temperatures rise into the 90’s today.

2 thoughts on “Another Lueders Leaves Wittenberg”