The American rock group, Eagles, produced a hit song in 1972 titled, Take It Easy.  The second stanza of that song begins like this:

Well, I’m a-standin’ on a corner in Winslow, Arizona
Such a fine sight to see
It’s a girl, my Lord, in a flat-bed Ford
Slowin’ down to take a look at me

When I run across the story of a person who begins their life in Perry County, Missouri,  but their life comes to an end in Winslow, Arizona, I just have to tell that story.  When the main character would be celebrating her 150th birthday, it makes the tale even more appealing.

Juliane Popp was born on July 16, 1870.  Her parents were Wilhelm and Caroline (Hoffstetter) Popp.  Juliane was baptized at Immanuel Lutheran Church in Altenburg, but later she was confirmed and married at Concordia Lutheran Church in Frohna.  Juliane did not make it into the census taken during the year of her birth.  The first census in which we find her was the one taken in 1880 when she was 9 years old.

Now let’s discuss the early years of Juliane’s future husband.  His name was Carl (Charles) Bruhl, who was born on May 22, 1869.  In his case, his surname would later be spelled Brul.  Carl was the son of Johann and Elizabeth (Lehner) Bruhl and baptized at Immanuel Lutheran Church in New Wells, Missouri.  We do find Charles in the 1870 census where his family was living in Apple Creek Township.  Charles was one year old.

By the time of the 1880 census, the Bruhl family was living in the Brazeau Township in Perry County.  Charles was 11 years old.

On November 5, 1891, Charles Bruhl married Juliane Popp at Concordia, Frohna.  If I was in Altenburg today, I’m sure I could have found a church record for that wedding.  As it is, I can only display their marriage license.

Charles was a farmer in Perry County for quite a few years.  He and Juliane have 8 children listed in our German Family Tree.  Below is the entry for this family in the 1900 census in which 4 children are shown.

Next, we can see this household in the 1910 census.  In this census, we see the surname spelled without the “H”.

The last census in which we find the Brul family living in Perry County was the one taken in 1920.

Between 1920 and 1930, the Brul family made a major move.  In the 1930 census, we find them living in La Junta, Colorado.  Charles was 60 years old by then, and even though I did not display it, he is not listed as having any occupation.

When I searched for this couple in the 1940 census, I was only able to find Charles Brul.  He was living in a state hospital located in Pueblo, Colorado as an inmate.

I was able to find a few of the Brul children living in this vicinity of Colorado, but I was not able to find Juliane Brul.  The next document I could find for her was an Arizona death certificate that puts her in Winslow, Arizona at the time of her death.  This form says she had been staying in Winslow for 1 year.

Charles and Juliane Brul are buried in the Fairview Cemetery in La Junta, Colorado. 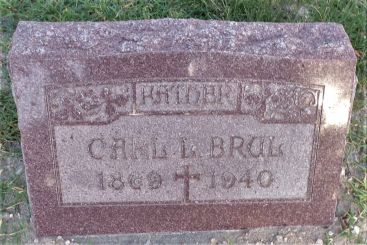 The map below shows the relative locations of La Junta, Colorado and Winslow, Arizona.  La Junta is located on the banks of the Arkansas River which meanders its way through Colorado, Kansas, Oklahoma, and Arkansas before emptying into the Mississippi River.  Winslow, Arizona was located along the historic Route 66 (now replaced by Interstate 40). 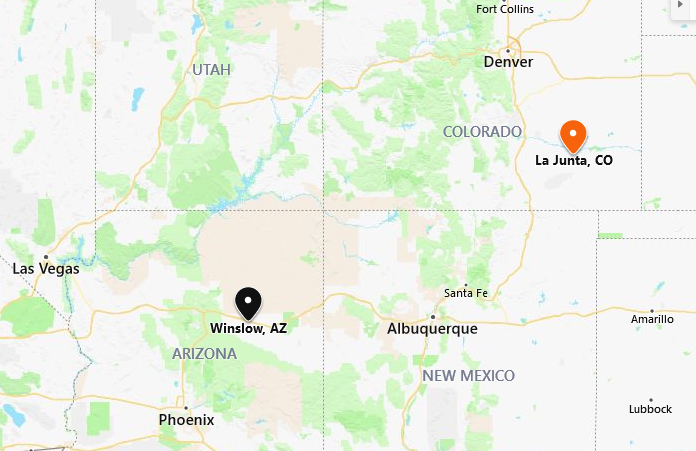 The place made famous by the Eagles’ song is shown below.

I have this feeling that this Brul family had its rough places on its journey through this life.  We might admit these days that we are experiencing some rough places as well.  We know we can always count on our God to accompany us no matter where we go or what we experience.  However, maybe on this day, we just need to Take It Easy.

I know our new grandpuppy, Oakleigh, is taking it easy this morning.  She’s been sleeping like this at my feet as I have written most of this post. 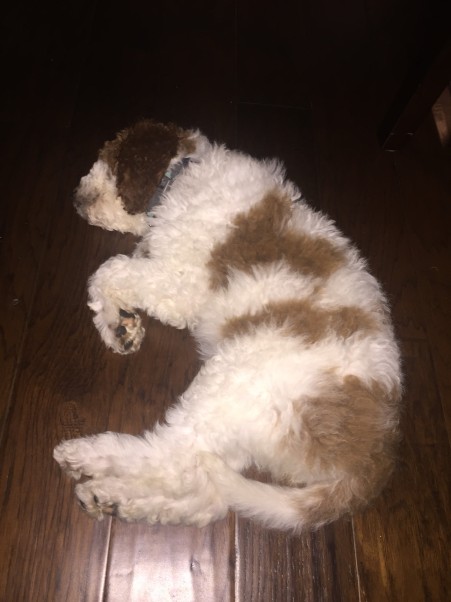 2 thoughts on “A-Standin’ with the Coroner in Winslow, Arizona”