The name Drumtra arrived in Perry County in the 1870’s and basically disappeared by the 1940’s.  The following article can be found in the 1898 publication called “The Great Southwest”.  It tells the story of Wm. J. Drumtra coming to Altenburg.

“The above named gentleman was born in Saxony-Weimar, Germany, in 1859, being 39 years of age.  Mr. Drumtra migrated to the United States in 1872, locating at Hazelton, Pa., where he served one year in a machine shop,and serving an apprenticeship in the watchmaking and jewelry business.  After that he traveled one year through the United States with Engel’s Apostolic clock, taking in all the leading cities and towns in the country, after which he settled down at Altenburg, where he held many positions of trust, showing the esteem in which he is held by his fellow-men.  He was postmaster at Altenburg, which appointment he held continuously for 16 years, and it was through his perseverance that Altenburg secured a daily mail and money order office.  He has taken a deep interest in the mercantile affairs of his adopted home, never failing to join in any public work.  When the Creamery was first talked of, he was one of its most ardent supporters, and has been manager of this institution since its beginning, about five years ago, and under his supervision the Creamery is rapidly attaining a reputation for its excellent butter.  There is also an excellent band at Altenburg, of which he is leader.  At present he is president of the public school board.  He carries a choice selection of watches, clocks, jewelry and stationery, and his skill as a workman has no rival.”

It certainly appears that this “outsider” came to Perry County and became a prominent businessman and supporter of community activities.

William married Susanna Maria Mueller in 1880.  After Susanna’s death, William married Sarah Beyer, daughter of Teacher Beyer, longtime educator at Trinity Lutheran School.  William had six children, three boys and three girls.  Four children were born to Susanna and two to Sarah.  The three boys moved away from Perry County before the 1940’s.  One is buried in Los Angeles, one is buried in Chicago, and one moved to St. Louis.  So the Drumtra name left Altenburg.  Although the name is gone, there is no doubt that there are some Drumtra genes still present in this community (probably among some Oberndorfers).

The music interest in the Drumtra family is evident in the photo below which shows William with three of his children. 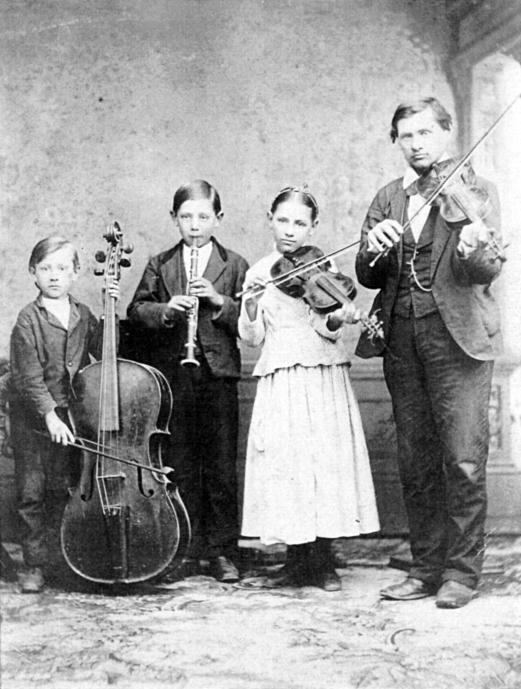 2 thoughts on “A Name Appears and Disappears”