Dena Dobberphul was born on June 25, 1887.  That is not a Perry County name, and you might wonder what connection Dena has to this place.  Well, in 1908, Dena married Martin Hemmann, and that certainly is a Perry County name.  Martin was a great grandson of J.G. Hemmann who we wrote about a few days ago in A Prolific Father.

Martin Nicholas Hemmann was born in New Wells, Missouri in 1883.

Sometime after 1900, Martin moved to South Dakota.  The first record I could find of him there was a South Dakota marriage record.  He married Dena Dobberphul in 1908.  They are both listed as being from Hanson Township in Brown County, South Dakota.  Dena gave birth to three children, but none of them lived for more than a couple months.  Dena died   sometime before 1927.  Martin remarried in December of 1927.  Her name was Emma Schenk.

Here is where the story gets more interesting.  The 1910 census for Hanson Township lists a Gustav Hemmann as living with a Badten family as a hired hand.  Gustav was Martin’s younger brother, who was one of a set of twins born in 1886 in New Wells.  Meanwhile, in the 1910 census we also see that Martin and his relatively new wife shared their home with Anna Hemmann, an older sister of the Hemmann brothers.

Gustav Hemmann married Henrietta (Etta) Badten on March 1, 1911.  Etta was the sister of the William Badten, in whose home Gustav was living in 1910.

By 1920, both of the Hemmann brothers had moved north.  They are both listed in the 1920 census as living in Adams County in North Dakota.  There is no indication that Anna was with them.  However, we do find another sibling living there, and this may be why they moved to this new location.  His name was Rudolph Hemmann, who was born as part of another set of twins in the same family in New Wells in 1891.

Rudolph and Martin are buried in Rose Hill Cemetery in Reeder, North Dakota. 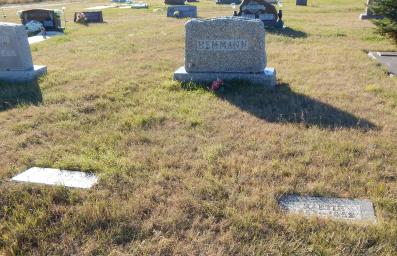 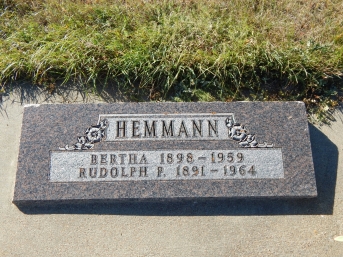 Gustav and Etta Hemmann managed to move to Salt Lake City, Utah, and both are buried there in the Larkin Sunset Gardens Cemetery.

It just so happens that there is a branch of the Hemmann family having a reunion in Uniontown this weekend.  We welcome any input about their family history.