When you look at the list of students who attended the Log Cabin College during its first year in 1839, you run across the name Columbus Price.  I have found some indication around the museum that at one time this person was described as an Englischer from Brazeau and also as being a “lad”.

In reality, Columbus Price was a Scots-Irish Presbyterian from Brazeau, and when he attended the Log Cabin College in 1839, he was not a lad at all.  He was a twenty-five year old who was married and had two children already.  Today would have been his 202nd birthday because he was born on September 30, 1814.

Most of the Presbyterians in Brazeau, Missouri, which is about four miles from Altenburg, arrived in Perry County around 1820.  Most of them arrived here from Rowan County in North Carolina.  Columbus came here with his parents, William and Darcas (Campbell) Price.  Columbus was probably around six years old at that time.  On December 1, 1836, Columbus married Lydia Swann, also of Brazeau.

I have my own theory about why a twenty-five year old farmer would attend the Log Cabin College.  I think he was there not so much to learn the subject matter, although I do think he might have wanted to learn some German so that he could communicate with his new neighbors.  I think he was there mainly to learn how to run a school like these new Germans did.  Several years later, Columbus was on an education committee at the Brazeau Presbyterian Church that established their Academy which was organized in a very similar manner to the German gymnasium.

One of those two young sons apparently died not long after this census.  Their next child was born in 1841, and we have no more record of Columbus attending the College after its first year.  All in all, Columbus and Lydia had eight children who lived into adulthood, and only one of them was a girl.

Contrary to the practice of the German Lutherans, the Brazeau Presbyterians were not opposed to slavery.  In an 1843 tax record, it notes that Columbus Price had one slave who was worth $300.  In 1860, it is recorded that Columbus had twelve slaves and two slave houses.  It should also be noted however, that two of his slaves enlisted in the Union Army toward the end of the Civil War.  I must admit that every time I see the photo of Columbus Price, I imagine him wearing a Confederate officer’s uniform as he is leading a group of Rebel soldiers. 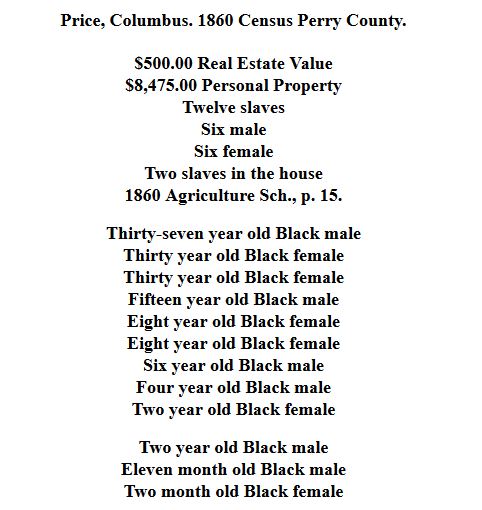 Columbus was a rather successful farmer in the Brazeau area all his life.  He had leadership positions in the Brazeau Presbyterian Church.  In fact, he was an important part of the building committee when the present-day church was constructed and dedicated in 1854.  He is also buried in their cemetery.

One thought on “An Englischer from Brazeau”