Trinity Lutheran Church in Altenburg is one year away from the 150th year anniversary of the dedication of their present-day church sanctuary.  It was dedicated on Reformation Sunday in 1867.  This church is used for the congregation’s worship every Sunday.

If I have this figured out correctly (and I suppose I could be wrong), I think it is likely that 150 years ago at this time of the year, members of this congregation were going about the task of hauling rock to the location where their new church was going to be built.  At this time of the year the farmers may have been done bringing in their harvests.  The weather would have been more tolerable after what must have been a very hot and humid summer.  The work would hopefully be done before the harsher winter weather would arrive.

Workers were hired to cut the stone which was to be used for the church.  They would get the stone from a creek bed that is known as the “Bodenschatz Branch”.  Here is a photo of that creek bed as it looks today.

This creek bed is located at the bottom of a very steep hill which is still known as the Bodenschatz Hill to this day.  Here are some present-day photos of that hill.  I know that my pickup truck…..the one with not much pickup……has a difficult time getting up this hill, and I usually have to down-shift.

One of the big challenges of getting the cut stones to the building site was getting up Bodenschatz Hill.  The job of hauling rock was done by using wagons pulled by draft horses and mules.  The story is told that an extra team of draft horses was always available to help get those wagons up that hill.  The rest of the trip could be made using the normal team of animals to pull the wagon.  I guess you could use this as an example of extra horsepower enabling a job to get done.  You should also remember that all of this work was done on the dirt roads that existed at the time.

The stones used for the construction of the church were quite large.  Here we see some of the stones which are part of this church building. 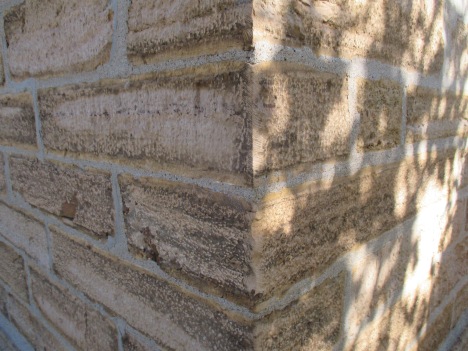 It is even more astounding to know that the stones which make up this building are 29 inches thick.  I have to wonder whether they had to bring these stones to the church one at a time.

Another story is told that when more stones needed to be hauled, Rev. Koestering had to ask for volunteers after church on Sunday.  If there were no volunteers, he would just point out people and tell them that they were going to haul rock.  There is also a story that a rather long ramp was built to enable the workers to get these heavy stones up to the top of the church.  It must have been quite a sight.  We only wish that we had photos of that construction process.

The final result is a beautiful church building that has served this congregation well.  It has survived several severe storms, including the 2009 storm which downed the steeple.  Even that storm was unable to move the stones that make up those walls.  The building seems ready to serve this congregation for many years to come.  Maybe even another 150 years.