I know this is a great stretch, but I cannot resist a possible connection between historical people.  In the Roman Catholic Church, there is a feast celebrated in some places called the Feast of Gertrude the Great which takes place on November 16th.  Gertrude was a German nun who became notable for her spiritual writings in the 1200’s.  She just so happened to be born in Eisleben which later became the birthplace of Martin Luther.  Eisleben is also located in Saxony.  Now you may know where I am heading with this.  East Perry County happens to have a notable woman who we also consider great and happens to have November 16th as her birthday.  Being a Lutheran, she was certainly not a nun.  Around here, we are also proud of the fact that she is the mother of some pretty special friends of our museum.  We are also so very grateful for the contributions to our historical society by her and her late husband. Her name is Lillian (Schilling) Fiehler.

Lillian is the daughter of Rudy and Clara (Loebs) Schilling.  I am reluctant to tell you what year Lillian was born because she still lives in the area, and I learned a long time ago not to give evidence about how old a woman is.  Rudy was a farmer in the Brazeau Creek valley north of Altenburg.  Clara Loebs was my father’s half-sister, so that makes Lillian my half-cousin, sometimes called a paternal cousin, but I always considered her simply as my cousin.  She was one of seven children who were part of the Schilling family.

From right to left: Myrtle, Lillian, Raymond, Melvin, Lorene, Leonard, and Harold (also oldest to youngest).  They are standing in front of their old farm place.

On June 18, 1950, Lillian became the wife of Robert Fiehler.  A previous post was written about Robert’s family and his occupation working with cars….Altenburg Needs a Mechanic.

I was 5 months old at the time they were married, and I was living in St. Louis, but I like to think that my parents, regardless of having an newborn, would have traveled to Altenburg to attend this wedding.  After all, my father was one of Lillian’s godparents.  If so, then I can say that I also attended this wedding.  I’ve been trying to call her today to actually find out, but she must be out playing cards with her friends at the place where she lives now.

Here we see the Fiehlers standing in front of their home on Main Street in Altenburg.

Lillian and Robert had five children.  She now has five grandchildren and five great grandchildren.  Here is a photo of the Fiehler family taken about ten years ago.

Recently, someone had the opportunity to get a photo of Lillian standing in front of the old Schilling place. 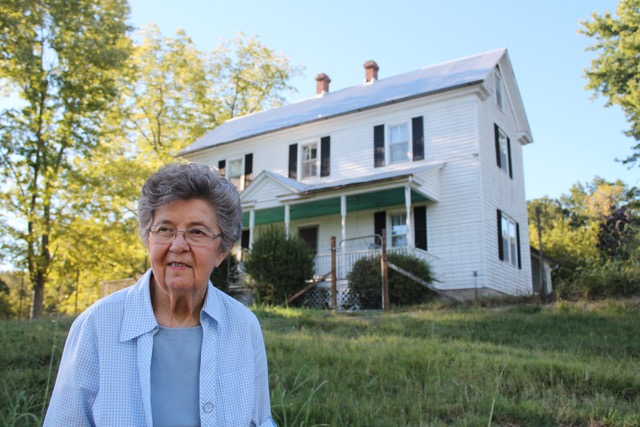 When the museum was built in 2005, Lillian and Robert immediately became two of its most faithful volunteers.  Lillian was also around each year to help decorate the trees for our annual Christmas exhibit.

Other interests of hers over the years were the care of her youngest son, Tim, singing in the choir, caring for her flowers, and baking.

Lillian’s husband, Robert, died in 2009, and Altenburg lost one of its greatest storytellers, although their son, Gerard is doing his part to keep up with that family tradition.  Lillian just so happened to stop by the museum yesterday with two of her children.  She was able to visit this year’s Christmas display on its first official day to be shown.  We miss her being here regularly, but on special occasions, she has been known to still come by to work here.  To me, she will always be considered Lillian the Great.  Happy Birthday, cousin to whom nun can compare.

7 thoughts on “Lillian the Great”