There seems to be some dispute about when the steamboat Clyde arrived in St. Louis with the immigrants that had voyaged across the Atlantic aboard the Johann Georg.  However, an article in a St. Louis newspaper said that the Clyde had arrived on January 24, 1839, so that is the date that is agreeable to most, and it is the reason why I am writing this post on this day.

Yesterday, I continued my search for evidence of the Gesellschaft ships arriving in New Orleans.  One that I found was the Johann Georg, which arrived on January 5th, but did not make the paper until the January 7th issue of the True American. 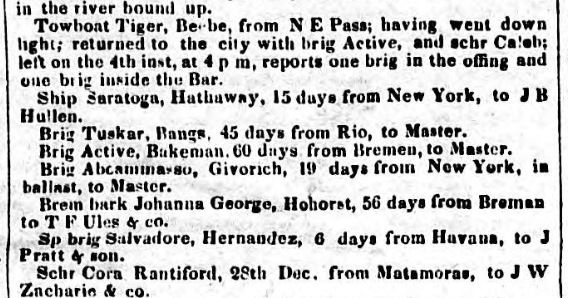 We can also see here a reference to the towboat Tiger, which would later assist getting the Olbers out of the mud.

Obviously, a mistake was made in identifying C.F.W. Walther as J. Walther.  Other names are also slightly misspelled.

We do not know when the Clyde left New Orleans, but it must have been before the Republik arrived on January 12th.  No mention is made that indicated that they had seen any of the other immigrants when they arrived in New Orleans.

One other note was found in the same issue of the True American that I find very interesting.

As near as I can tell, the Randolph that is mentioned here might be Randolph, Tennessee, which is located right on the banks of the Mississippi about halfway between Memphis and the Missouri Bootheel.    This memoranda would definitely indicate that all of the steamboats going up the Mississippi carry the immigrants were going to have to deal with ice.  This no doubt caused these steamboats to take longer completing their trip to St. Louis.

Once the Clyde arrived, Pastors Buerger, C.F.W. Walther, and Keyl were now in St. Louis providing spiritual leadership for the immigrants.  They would still have a while to wait until all of the immigrants would be together in St. Louis.  However, at least all of the immigrants (other than the passengers lost on the Amalia) were somewhere in the United States, and one other steamboat was already on its way up the Mississippi.

One thought on “And Then There Were Two”