There are times when I feel I am receiving divine guidance when I find stories to do for this blog.  Today is one of those.  Actually, yesterday was one of those too.  I was floundering for a story and was just about out of options while searching for an event that took place on April 6th.  I was almost to the end of our German Family Tree when I stumbled upon the story about the Wichern family that I ended up writing about yesterday.  Before yesterday, I was clueless about the Wichern and Holschen families located on the Ridge next to the river.  Had I not done that story, I probably would not have been attracted to the story I write today.

However, before I begin this story, I must also say that I once again feel like Alice must have felt like when she made the decision to go Through the Looking Glass and found a whole different world.

I feel like I have now entered the Leimbach-Holschen Labyrinth.  It feels very similar to the situation I wrote about in the post, Flummoxed by a Family.

Today’s story starts with a birthday.  Edward Bernhard Leimbach was born on April 7, 1896.  He was the second of eight children to be born to Ernst and Anna (Holschen) Leimbach……all boys.  Not all of these children lived.

First let’s take a moment to look at geography.  Yesterday, we published this image of land ownership in Perry County in 1915. 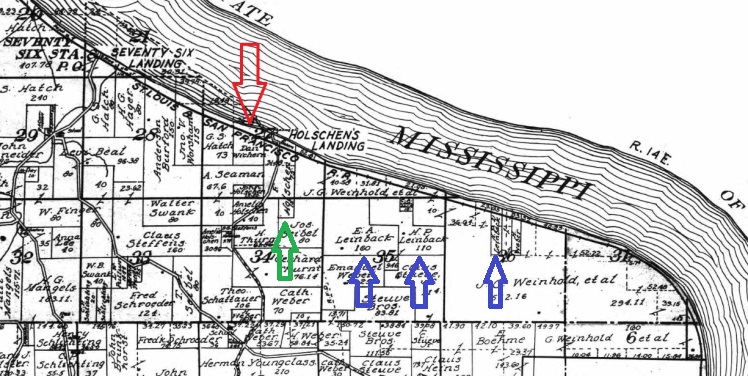 I have added some arrows.  The green arrow points to Holschen property.  The blue arrows point to property owned by some Leimbachs.  The E.A. Leimbach parcel was owned by Ernst August Leimbach, Edward’s father.

Here is another image we posted a while back.  It is one of Dale Roth’s navigation maps that he uses as he pilots his boat on the river.

In the upper left hand portion, you can see a place labeled Leimbach Landing.  Just off the photo farther to the left is another landing.  That would be Star Landing, or as it was previously named, Holschen’s Landing.  If you went even further to the left, you would get to Seventy-Six, Missouri.  This is the same area which is called The Ridge. 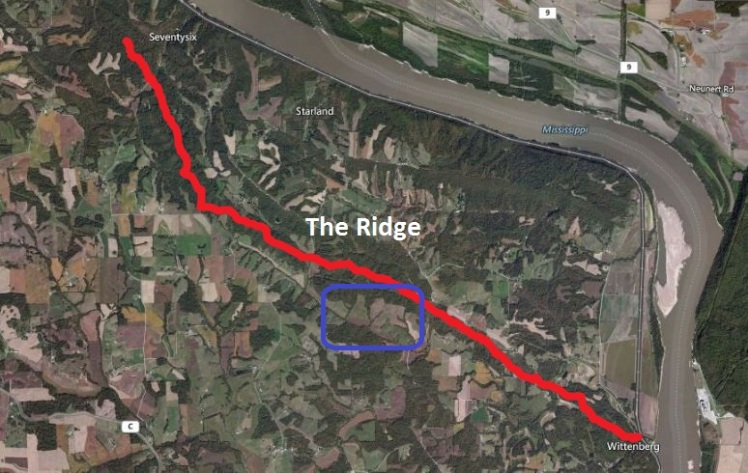 According to this document, Edward was a farm hand who received no compensation, which probably means he worked for room and board.  Two years later, when Edward registered for the World War I draft, he was shown as once again living in Perry County (Wittenberg) and working at his father’s farm.

This form was filled out in June of 1917.  In February of 1918, Edward would marry Frieda Holschen at Immanuel Lutheran Church in Altenburg.  That’s right.  Edward’s mother was a Holschen.  Now his wife is a Holschen.  Six months later, he would be inducted into the U.S. Army.  His wife, Frieda was quite pregnant when he left, and she would give birth to their first child, Emilie, on November 6,  1918.  If he was like so many others from Perry County, Edward probably was in the state of Iowa at Camp Dodge for boot camp.  He was not sent overseas.

1922 was a dramatic year in this part of Perry County.  The Wichern house burned to the ground.  There was a train wreck on a trestle not far from Star Landing (shown in these photos).

And then in November, there was a train robbery that started in Seventy-Six, Missouri, just above Star Landing, and ended in Wittenberg.  These stories must have been part of many daily conversations among the Leimbach and Holschen families during that year.

Then came a devastating event that impacted both of these families.  The deadly tornado of 1925 called the Tri-State Tornado ripped through this area of Perry County on March 18th.  Several of the photos that we have previously posted have shown damage to both Leimbach and Holschen homes.

The two oldest children in the Edward Leimbach family were seven and five years old when this tornado came through.

Here is a photo taken in 1940 when Edward’s parents were celebrating their 50th anniversary.  Maybe someone who knows the people in this photo can inform us which one is Edward.  My guess is that he is on the left side of the photo.

Edward’s wife, Frieda was still giving birth into the 1940’s, and it is here where we find the definitive answer to who the person is that is second from the right in this photo.

His name is Leroy Leimbach, who was born to Edward and Frieda Leimbach in 1942. When I first published that story, I called him Larry, and I still think he may have called himself Larry when he worked at the Alta-Dena Dairy.   I now know that he also died in California in 2008.

Frieda died in 1976, and Edward died in 1985.  They are both buried in the Immanuel Lutheran Cemetery in Altenburg. 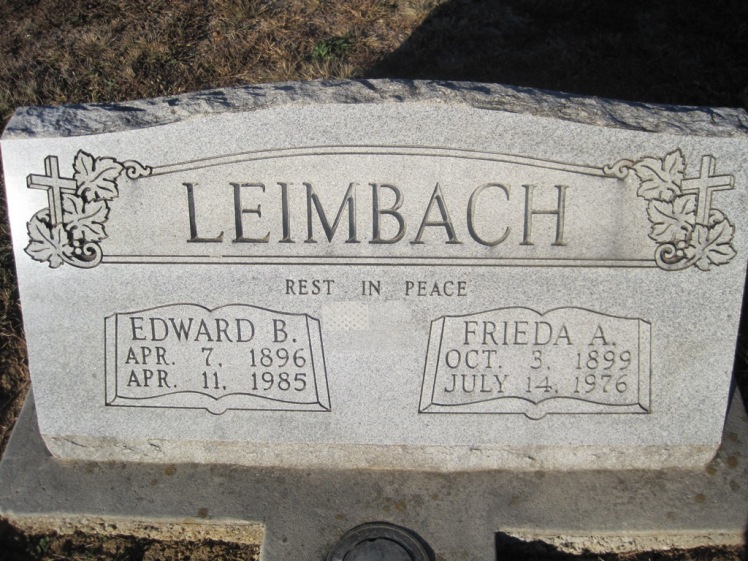 After I walked through this looking glass, I found at least three Leimbach-Holschen couples.  Maybe someday, I will figure my way through that Leimbach-Holschen Labyrinth.  Needless to say, the Ridge seems to be the source of many different and interesting romances.