Martha Marie Telle was born on June 30, 1870.  When she later married Gottfried Heinrich Mueller, she became Martha Marie Mueller.  Thus, the reason for the reference to 3M in the title.  Today’s story is about this Martha’s family.  I say “this” Martha because she is not the only Martha Telle who lived in the Perry County area.

Martha Marie was the daughter of Andreas and Sarah (Noennig) Telle.  She was baptized at Grace Lutheran Church in Uniontown, Missouri.  When she was 34 years old, she married a widower, Gottfried Heinrich Mueller.  In doing so, she immediately became the stepmother of four daughters between the ages of four and ten.  Their mother, Ida (Landgraf) Mueller had died in 1903.  Martha and Gottfried were married on November 20, 1904.  Here is their wedding photo.

This is one of those weddings where the bride wore a dark dress with a white veil.  A while back, I wrote a post titled Another Black and White Wedding.  It also contains a groom who is well-groomed with a rather magnificent mustache.

Gottfried was the son of Christoph and Karoline (Franke) Mueller of Uniontown.  Christoph was the main character of the post titled, Christoph in the Cavalry.

Martha and Gottfried had three more children.  We see two of these three in this photo taken when they were very young.

Much later, a photo was taken of all seven members of what I call the 3M Company…..four stepdaughters and three children of Martha Marie Mueller.

Dora was the wife of Theodore Kassel.  Their story was told in the post, Frohna Machine Shop.  The other three step-daughters of Martha married farmers.  Esther married Ernst Doering and lived in Wittenberg.  Linna and Bertha married two Roth brothers.  Linna married Leo Roth who farmed in the Frohna area.  Bertha married Gottfried Roth who farmed in the  Uniontown area.  This wedding photo of Bertha and Gottfried also includes Bertha’s half-siblings, Frieda and Walter.  They are on the right side of the photo. 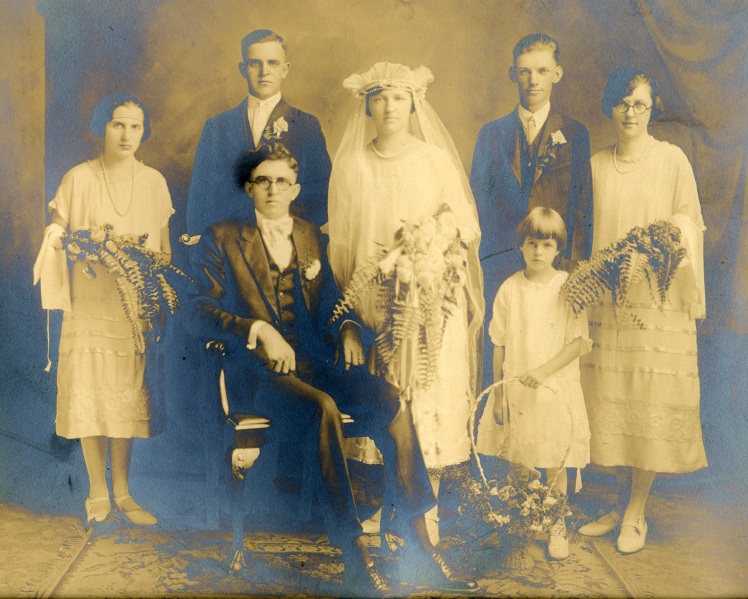 Frieda married George Loebs of Wittenberg.  When she did so, she was marrying my father’s half-brother.  So these two were Uncle George and Aunt Frieda to me.  George’s mother was a Mueller, but from a different Mueller clan.  I remember Uncle George being a janitor in his later years at Atonement Lutheran Church in Florissant, Missouri.  Here is their wedding photo.

The maid of honor in this photo is Lorna (Schmidt) Schlimpert, George’s half-sister.  The best man is Walter Mueller, Frieda’s brother.

Walter Mueller became a Lutheran school teacher.  It appears that he may have spent his entire career at schools in Indiana.  I see evidence of him living in Hammond, Seymour, and Ft. Wayne, Indiana.  Here is another photo of Walter.

Herbert, the youngest in the family, is said to have been a salesman for a supplier of dentist supplies.  He lived on both sides of the river in the St. Louis area over the years.  Herbert served in the military during World War II.  Here is a photo of him in his uniform.

Martha’s husband, Gottfried, died rather early at the age of 57 in 1926.  Here is his death certificate.

Over the following years, we find Martha living with some of her children as a widow.  She died in 1955 at the age of 85.  Here is her death certificate.

2 thoughts on “The 3M Company”