Today would have been the 116th birthday of Henry Carmon Castor who was born on July 28, 1901.  His birthplace is not one that would be expected in a blog that focuses on Perry County, Missouri.  This boy was born in Concord, North Carolina which is located in Cabarrus County.  However, the area in which Henry was born was one which was populated by plenty of Lutherans.  In fact, Lutherans were in that area of North Carolina a lot longer than our ancestors here in Perry County.  And, just as a side note, this was the same basic area from which many Scots-Irish Presbyterians came to form Brazeau Presbyterian Church about 20 years before the Saxon immigration.  Here is a list of births for this part of North Carolina that includes several Castors, including Henry.

When it came time for Henry to attend college, he went to a Lutheran college located not far from his home.  It was located in Hickory, North Carolina, and it was called Lenoir Rhyne College.  There was another Lutheran college in that neighborhood called Concordia College, which was located in Conover, North Carolina.  Here is a photo of Concordia College.

The college in Conover had become associated with the Lutheran Church-Missouri Synod.  It was about this time when divisions among the Lutherans in North Carolina were beginning to occur.  If you are interested in a history of Concordia College and Lenoir Rhyne College, there is an article to be found at this link.

It was at Lenoir Rhyne that Henry studied to become a Lutheran pastor….but not a Missouri Synod one.  Here is a photo of Henry in a yearbook dated 1923 from that institution.

In the 1930 census, we find Henry as a Lutheran minister in Oklahoma City, Oklahoma.

The page on which this census is recorded states that it is at the Oklahoma General Hospital – Nurses Home.  Most of the entries are females listed as students, and they are about the same age as Henry.  However, Henry did not find his bride in this company of females.  His bride was also living in Oklahoma City and is found in this census entry.

Her name is Selida Schlimpert, and she was originally from Perry County, Missouri.  She was living with her mother’s sister, Anna (Boeger) Gardner.  Selida was the daughter of Jacob and Caroline (Boeger) Schlimpert who lived in the Seelitz area of Perry County.  Selida can be seen standing on the far right in this photo which has been previously posted in a Schlimpert story a while ago.

Henry and Selida were married at First Lutheran Church in Oklahoma City on September 29, 1931.  Here is their marriage license.

This congregation is now part of the Association of Free Lutheran Congregations, which is an organization that prides itself as not being a part of any Lutheran synod.

Over the years, we find the Castors living in a variety of cities where Henry was serving as a Lutheran minister.  Here are a series of city directory listings showing these places.  In 1936, they were living in Saginaw, Michigan.

The death of Henry Castor in itself is an interesting story.  Henry had a brother by the name of Bradshaw DeKime Castor.  He most often went by B.D. Castor, and he was also a Lutheran minister.  This Pastor Castor had a son by the name of Charles who filled out this World War II draft form. 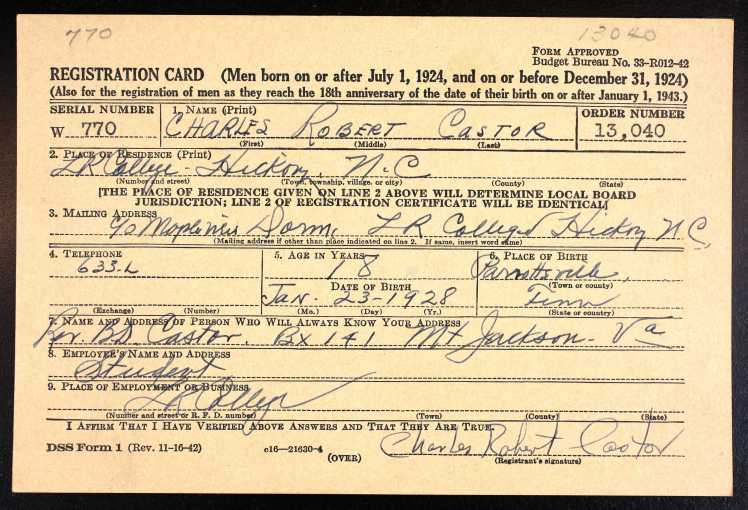 On this form, you see that Rev. B.D. Castor was living in Mt. Jackson, Virginia at the time.  Mt. Jackson is located in the Shenandoah Valley not far from Washington, D.C.  Charles was attending Lenoir Rhyne College in Hickory, North Carolina.

About twenty years later, this Pastor Castor died.  He died in 1968.  Here is his death certificate.

You can see that he died in Concord, North Carolina, his old hometown.  But what about his brother Henry?  Here is his death certificate.

Quickly, I will mention that Selida Castor died in Roaring Spring, Pennsylvania in 1983.  I am guessing that she was living with one of her children there.

All of these Castors, no matter where they died, were buried in the Center Grove Lutheran Cemetery in Kannapolis, North Carolina.  There are 41 listings of burials in that cemetery that contain the surname Castor.  Here is the marker for Henry and Selida in that cemetery.

Just a quick note.  All his life, Pastor Castor was never a minister in an LCMS congregation.  Yet this cemetery in North Carolina is connected with Center Grove Lutheran Church which is now an LCMS church.  Go figure.

Another side note:  The Earnhardt racing family is known to be from Kannapolis, North Carolina, and there are 26 entries in this same cemetery with the surname Earnhardt.  One of them is Ralph Earnhardt, the father of Dale Earnhardt and the grandfather of Dale, Jr.  There is even an Earnhardt who married a Castor.

I’m going to end this post with a little teaser.  I may have discovered the topic for another future post.  While researching the Concordia College in Conover, I ran across two names, Rev. Paul Bischoff and Rev. W.O. Bischoff, who were involved in its history.   Paul is on the left here; W.O. is on the right.

These are brothers who also happen to be grandchildren of the George Bischoff I wrote about a few days ago who was part of the original New York Group.  And they were both from Fort Wayne, Indiana where Ida (Bischoff) Foelber’s husband was a Lutheran teacher.  I also know of a few other Perry County connections to the Conover, North Carolina vicinity.  My curiosity has been piqued.  Stay tuned.

One thought on “Pastor Castor”