When the research crew at our museum runs across the Mueller surname, one of the first questions we ask is, “Which Mueller family are we talking about?”  We usually put a Mueller into one of four categories.  In fact, Gerard Fiehler has put together a special binder on the Muellers which is an attempt to help us find the proper Mueller family when we are doing research.  Here we see the four different categories of Muellers.  Gerard and I even have a category that we call “Our Muellers”.

One of those four categories is described by us as the Frohna Muellers.  It happens to be the group of Muellers that can mostly be found in the Concordia, Frohna church records.  Today’s article will be about how the first members of this Mueller family ended up in Frohna.  It all started with a wedding that did NOT take place in Frohna.

Two young people voyaged across the Atlantic Ocean aboard the Copernicus in late 1838.  That ship arrived in New Orleans on the last day of 1838, December 31st.  It might just be my imagination, but I am guessing that a romance started aboard that ship between 21 year old Karl Mueller and 19 year old Amalia Kuehn.  Just two months after arriving in Perry County, these two were united in marriage on July 29, 1839.  Here is their marriage record which can be found in the Trinity, Altenburg books.  It was recorded there by Rev. Loeber even though he did not perform the ceremony.

I do not have a photo of Karl, but I did find one that is supposed to be Amalia (Kuehn) Mueller.

I wish I could see this entire photograph.  The hand on the shoulder indicates Amalia was not the only one in the picture.  We may also be seeing someone’s shoulder in the lower left corner.

Here is the passenger list of the Copernicus showing the Mueller family.  Karl is shown as Gottlieb Müller.

Here is the portion of that passenger list which shows the Kühns.  There were plenty of females in the Kuehn family.

The Mueller family is shown to be from Piesern, Germany.  That must certainly be the village of Biesern which can be found very near the village of Seelitz.  You can see these two towns in this map. 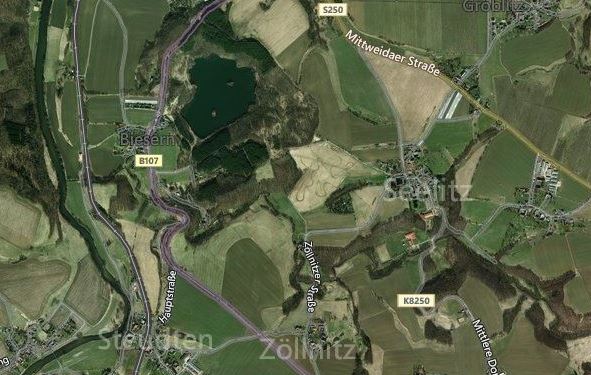 Seelitz was also the home of Rev. Ernst Moritz Buerger, who served the Lutheran church there.  Rev. Buerger also traveled aboard the Copernicus.  The people living in Biesern must certainly have attended the church that was located in Seelitz.  Here is a picture of that church.

The Kuehn family was from Sornzig.  This town was about 20 miles from Biesern (even closer as the crow flies).  This map shows Biesern and Sornzig. 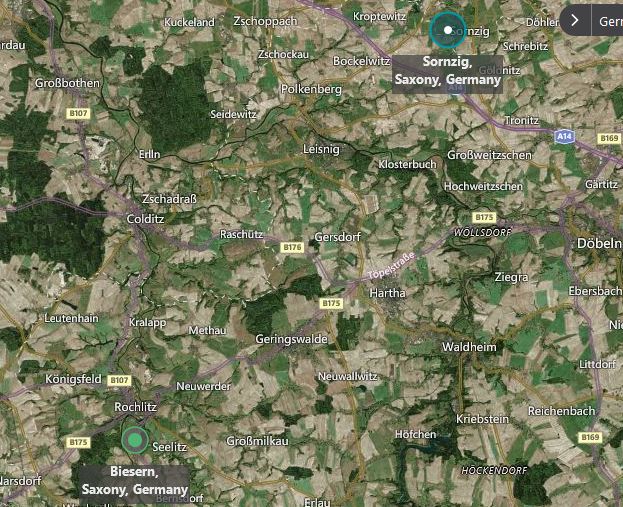 When the immigrants arrived in Perry County, many of the Copernicus passengers settled in an area that was called Seelitz with Rev. Buerger as their pastor.  In a map included in Zion on the Mississippi, we find Seelitz divided into property sections. 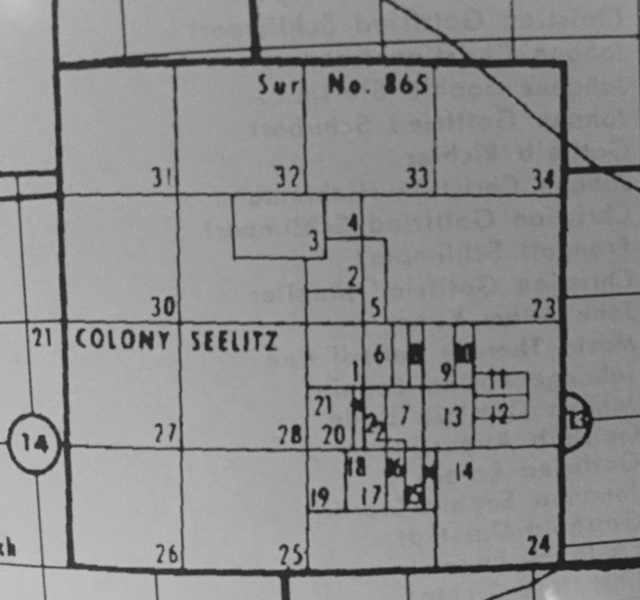 The Mueller family received the land shown here as lot #12.  The Kuehn family got lot #13.  So you can see that Karl and Amalia ended up living quite near one another.  And as we have already said, it was not long after their arrival that a wedding took place.

It was also not long before death entered the scene in the Mueller, Kuehn, and even the Buerger families.  Here is a litany of some early deaths.

Many of these deaths and burials took place in Seelitz.  Not long after Pastor Buerger lost his wife, he decided to leave Perry County.  This left the Seelitz Colony without a pastor.  I happen to think that all these deaths, along with losing their pastor, led Karl and Amalia to make the decision to sell their property in Seelitz and move to Frohna.  The property was sold to Traugott Poppitz on March 23, 1843.  I actually think that the Muellers may have already moved to Frohna earlier than this date because the death of their firstborn son in early 1842 was recorded in the Concordia, Frohna books by Rev. Keyl.

The Muellers would have 12 children, some of which died right away, but in the end there were 7 sons who went on to raise families.  As a result, our German Family Tree contains a whopping 16 pages which contain descendents from Amalia and Karl Mueller……the Frohna Muellers.

Karl died on the last day of 1880; Amalia died five months later in 1881.  Here are their gravestones in the Concordia Lutheran Cemetery in Frohna. 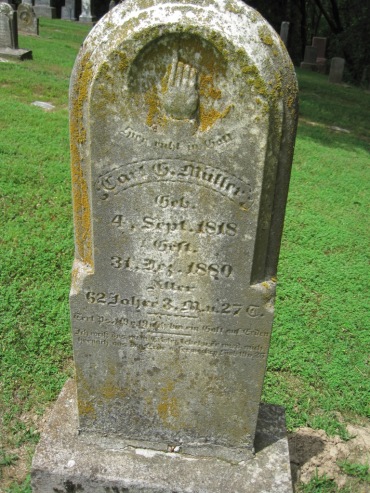 3 thoughts on “The Beginning of the Frohna Muellers”