We have an anniversary to celebrate today.  On October 17, 1901, August Friedrich Leimbach and Hulda Pauline Engert were married at Immanuel Lutheran Church in Altenburg, Missouri.  Here is a photo of their wedding.

And here is their marriage license.

August was the son of Paul Leimbach and his second wife, Louisa Schrier.  The Leimbach family had land on The Ridge, or as it is called Friedland in some of the Immanuel Lutheran Church records.

Hulda was the daughter of Gotthilf and Anna (Gerler) Engert.  Anna Gerler was one of the original Gerlers who, after coming to America, lost her parents and had to be “let out” to other families to be raised.  Anna was raised in a Palisch family.  Hulda’s father was one of the many children of Friedrich Engert, whose story was told in the post, Another Fertile Father.  One year before she was married, we find Hulda living with a Dietrich family across the river in the Fountain Bluff Township.  For some unknown reason, there is a bunch of information missing from this census record.  Her brother, Ernest, was also living in that household.

In the first census after their marriage, we see August as a farmer, and the family has one son.  Also, another of Hulda’s brothers, Theodore, was living with them.

A daughter was born in 1911 to this family.  They would have just those two children.  When August filled out his World War I draft registration, he listed his occupation as threshing and sawmilling.

This photo does not necessarily show the sawmill operated by August, but it must have been similar to this. 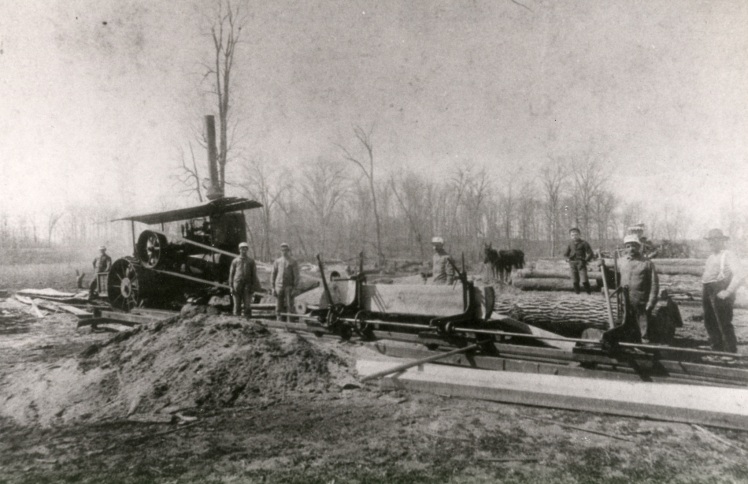 In 1951, this couple celebrated their 50th wedding anniversary, and this photograph was taken.

When August was much younger, he was part of a group of young men from The Ridge who formed a band.  Even though The Ridge was not an official town, this area north of Altenburg managed to put together a band of their own, and several Leimbachs were part of it. 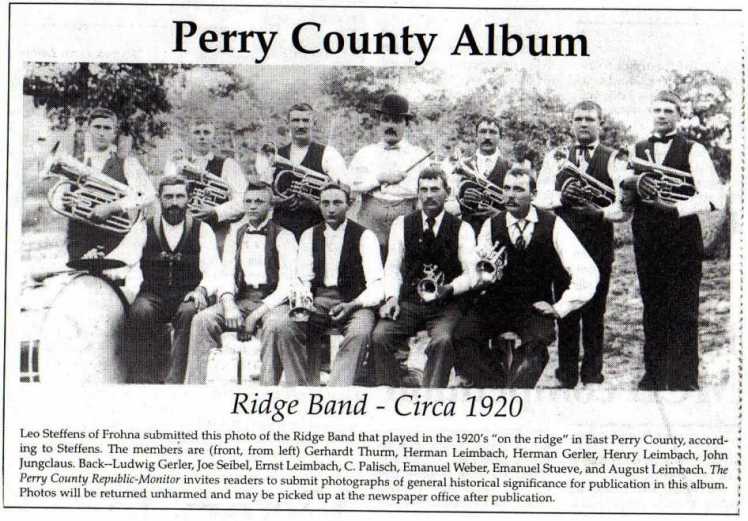 As is noted in the caption, August is standing in the back row on the right.  My observation has been that these old regional bands from that era were made up of only brass and percussion instruments.  Once again, though, we have evidence of a love of music in the German Lutheran culture of East Perry County.