If Bruno and Hulda Schade [pronounced Shaw-dee] were still alive today, Bruno might be bringing his wife a cake that says, “Happy 135th Birthday” on it.  However, after reading today’s post, you might think that Bruno may also be saying to Hulda, “How about we get the old buggy out of the garage and go for a ride?”

Hulda Fischer was born on October 24, 1872 and baptized at Trinity Lutheran Church in Altenburg.  She was baptized on the 355th anniversary of the Reformation a week later.  It makes me wonder if she was baptized as part of a special Reformation service at church on that day (if there was one).  Here is her baptism record found in the Trinity church books.

Hulda’s parents were Friedrich Albert and Emma Maria (Palisch) Fischer.  We do not have a photo of Albert, but a photo was taken of the Fischer family which includes both Hulda, her mother, and several siblings.  Friedrich Albert had died in 1881 when Hulda was 9 years old. 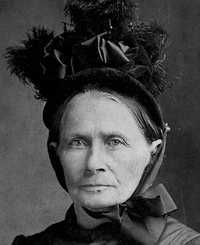 Bruno Schade was the son of Friedrich August and Elisabeth (Brandt) Schade.  He was born on April 7, 1872 and baptized at Immanuel Lutheran Church in Altenburg.  Here is his baptismal record from that church.

Bruno’s father died when he was just four years old.  So both Bruno and Hulda grew up in similar situations where during their childhood they were raised by a widow mother.  Here is a photo of Bruno’s mother.

When Bruno was just 19 years old, we find him listed in a city directory for St. Louis and working as a blacksmith.  As you can see, there were quite a few Schades living in St. Louis.

This photograph of a young Bruno might have been taken before he got married.  At this time in his life, he had no mustache.  He is holding some tools of the blacksmith trade.

On November 20, 1898, Bruno and Hulda were united in holy matrimony at Trinity Lutheran Church.  Here is their marriage license. 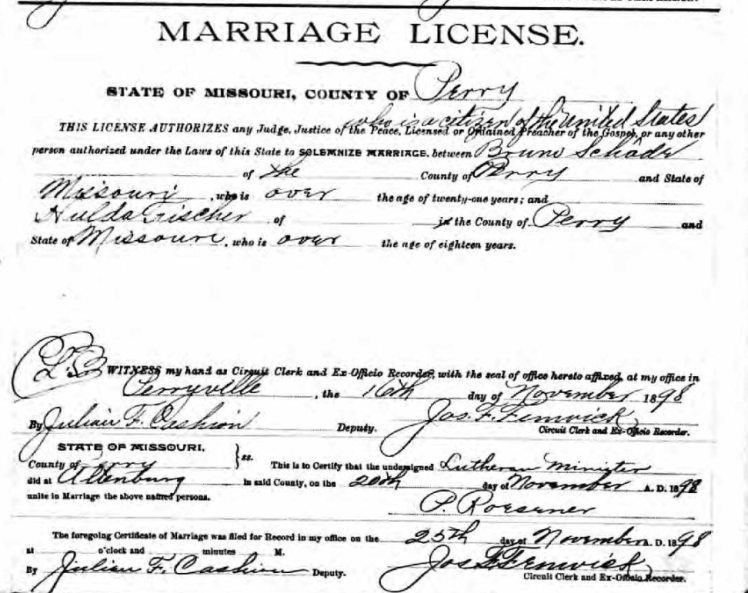 We also have this wedding photo of Bruno and Hulda.

I find it interesting that neither Bruno nor Hulda are looking directly at the camera, and they are not looking in the same direction.

It is not often that you find a photograph where the bride and groom and the wedding party are having fun at a wedding reception, but in this case we do.  This photo was apparently taken at someone’s residence.

Hulda is sitting on someone’s lap, and it is not Bruno.  In fact, even though someone has identified Bruno as being in the front passenger seat, I don’t think that is him……no mustache.  My suspicion is that this is a bunch of people clowning around, pretending to steal the bride, and Bruno is a spectator somewhere else.  I especially find the horn contraption on the front car fascinating.  I also find it puzzling that the steering wheels of the two automobiles are on different sides.  Maybe someone could enlighten me on how that was the case.

In the 1900 and 1910 censuses, Bruno is described as being a blacksmith.  Then in the 1920 census, he is called a wagon maker.  It is my understanding that Bruno, even though he may have been described as a blacksmith, may have specialized in working with wagons, which meant he also worked with wood.  His shop and home were located across the street from where the Altenburg Public School is now located.  Right next to Bruno’s shop was the Wachter blacksmith shop, and I understand that Paul Wachter worked mostly with metal.  Here is an old photo showing that portion of Altenburg which included both the Wachter and Schade shops.

The white house was the Schade home, and his shop was said to be beyond it, with the Wachter shop beyond that.  A fire in 1952 destroyed both the Schade and Wachter shops.  Here is a photo I took today showing this location as you see it now.

This photo is looking west.  The above photo was looking east.  Altenburg Public School is on the right.  The Wachter and Schade shops were across the road from the school.

Bruno and Hulda had four children, one of which was stillborn.  In a later photo of members of the Schade family, we see Bruno and Hulda standing in front of a car with their daughter, Frances, and son, Theodore.

Their older daughter, Hildegard, was probably married by the time this photo was taken.

Bruno died in 1958; Hulda died in 1959.  Both of them died in or near St. Louis, but they are buried in the Trinity Lutheran Cemetery in Altenburg.

It seems to me that Bruno was always surrounded by conveyances with four wheels.  He was a maker of wagons, and later he or Hulda are pictured near automobiles.  I would say he liked his “buggies”, either with horses or without.