Herbert and Herman Christisen were born on November 22, 1888.  Their parents were Anton and Margareth (Poehner) Christisen.  Their father was of Danish descent.  When these twins would later fill out their World War I draft registration, one of them listed their birthplace as Perryville, but the other one gave Belgique, Missouri as their birthplace.  Belgique is located in the river bottoms between Perryville and Chester.  On this land ownership map, we can see the Christisen property located near Sereno, which is a small town in that area.

You can see Sereno on this map of the area we are discussing.

In the 1910 census, we find Herman Christisen living as a hired hand with the family of James Phillips who lived near McBride, Missouri, which is also shown with a red arrow in the map above.

We can see the Phillips land on this map.  It is labeled as belonging to Emma Phillips.

In the same year as the 1910 census, Herman married Violet Phillips, the same person you see in that census as a 17 year old daughter.  Here is their marriage license. 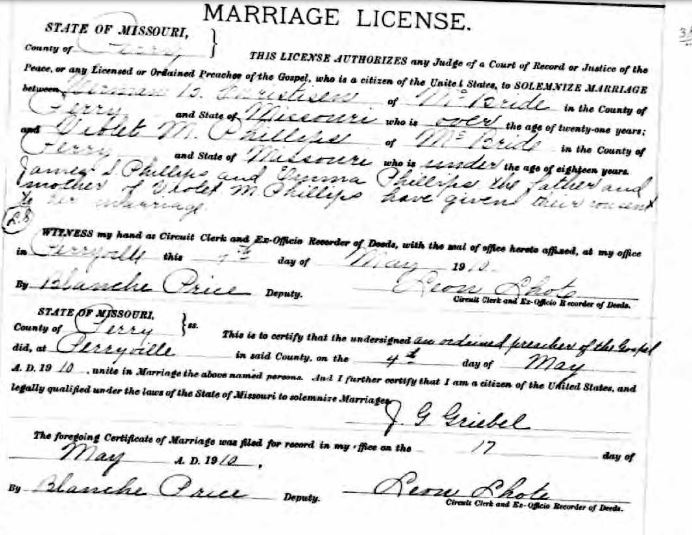 They were married by the pastor of Immanuel Lutheran Church in Perryville.  The Immanuel records say this marriage took place in the parish house, and it specifically says that it was an English service.  The Phillips family would have been described by German folks of that era as being Englishers.

Six years later, Herbert got married.  He married another Phillips girl, but she was not a sister.  She was a first cousin-once removed.  Her name was Rosa Viola Phillips.  She was the daughter of Joseph and Nancy (Griffith) Phillips.  On the first map above, you can see how close the Joseph Phillips property was to the Christisens.

When World War I occurred, the twins both filled out draft registration forms.  However, each was living in a different location.  First of all, Herman was shown to be living in Perryville, but he was working for the Doe Run Lead Company in Flat River, Missouri as a miner.

Herbert, on the other hand was working in Iowa for the Chicago, Milwaukee, and St. Paul Railroad.  Yet his home address listed was Belgique.  At this point in his railroad career, Herbert was a fireman. 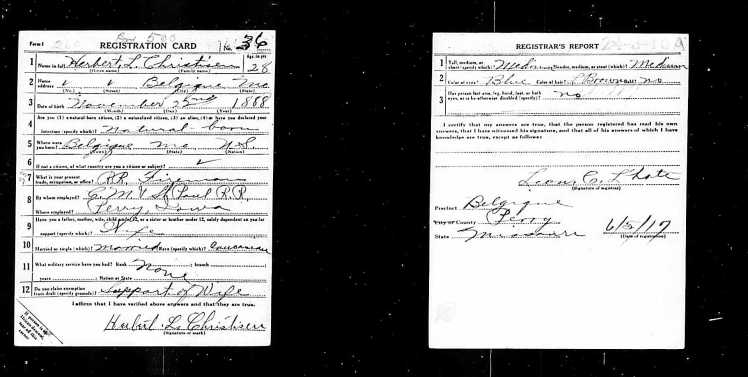 By 1920, Herbert was no longer working in the lead mines.  He followed in his brother’s footsteps and was working as a fireman on the railroad in Kelso, Missouri.  Kelso is located not far south of Perry County in Scott County.

In 1930, both of the twins were shown to have advanced to the position of railroad engineer.  Herbert was still in the same area of Iowa, and Herman had moved to Chaffee, Missouri.  If we backtrack to the 1900 census, in the James Phillips entry, you would find a John Taylor living in that household as a boarder.  His occupation was listed as being a railroad foreman.  I am thinking that this man may have had an influence in getting the Christisen twins involved in the railroad business.

Here is a map showing the routes of some of the Chicago, Milwaukee, and St. Paul Railroad Company.  Perry, Iowa is shown with a red arrow.

This later photo was taken of the train depot that was once located in Perry, Iowa.  It probably was a building which became very familiar to Herbert Christisen during his career with the railroad.

As for Herman, he may have been very familiar with this train engine which was part of the Frisco line in Chaffee, Missouri in 1935.

Sometime in the 1930’s, Herman and Violet Christinsen must have gotten a divorce.  Both of them married a second time.  Herman had four children in his family; Herbert had just one.  Herman died in 1955; Herbert died in 1975.  Herman is buried in the Immanuel Lutheran Cemetery in Perryville with his second wife, Mattie; Herbert is buried in Violet Hill Cemetery in Perry, Iowa.  Here are the gravestones of these twins. 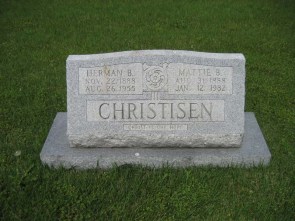