We have a birthday girl today.  Her name was Lydia Dreyer, and she was born on November 29, 1896.  She was baptized at Trinity Lutheran Church in Altenburg.  Her parents were Heinrich and Emma (Hesse) Dreyer.  Emma Hesse was one of the members of the Hesse family that was discussed in a recent post written by Cal Eggers.  Emma’s first husband was an Eggers.  This photo which showed the Dreyer family was posted in that article.  Lydia is #3. 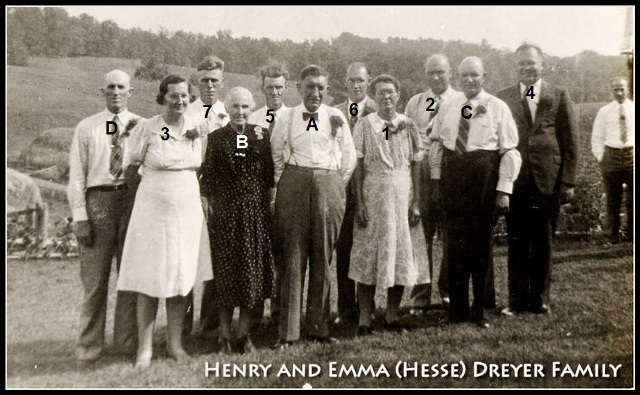 Not long after Lydia was born, a baby was born in New Wells by the name of Carl Gross (or Grosse).  He was born on February 9, 1898 and was the son of Edward and Elizabeth (Wallmann) Grosse.  Edward was a grandson of Gottlob Grosse who was one of the original immigrants who came to America as part of the Gruber Group in 1839.  Carl was baptized at Immanuel Lutheran Church in New Wells.  Here is a photo of the Gross family taken when Carl was still a child.

Since Carl was the middle son in that family, he is likely the boy standing on his father’s right.  Carl’s father was a farmer, but when Carl was just 10 years old his father died.  That meant that Carl and his older brother, John, had to do a lot of the farming at an early age.

Carl’s World War I draft registration shows him working for his mother as a farm laborer and living in Neely’s Landing.

Here is a map showing Neely’s Landing and its proximity to New Wells.  It is very near where the present-day Trail of Tears State Park is located.

As you must have concluded, Lydia and Carl got married.  They were married at Immanuel Lutheran Church in Perryville on June 22, 1922.  I wish I knew how these two managed to get to know one another, and also why they ended up having their marriage in Perryville.  The only hint I know is that the Dreyer land was not that far from New Wells.  Here is a map showing that Dreyer land in 1915.  There were two lots shown by the red arrows.

Here is the marriage license for Carl and Lydia.

We also have this wedding photo of this couple.

In the first census we find these two (the 1930 census), they have moved farther north in Perry County.  They were now situated in the town of Menfro, Missouri.

Carl then had the occupation as a retail merchant in that little town.  Thanks to our resident expert on Menfro, Trish (Moldenhauer) Erzfeld, who grew up there, we have this old photo of Menfro during its heyday.  It is now a ghost town.

There is a store called J.E. Hoskins Cheap Cash Store in the foreground.  I do not know if this is where Carl worked, but I suppose it is possible.  Menfro is located north of Farrar and Crosstown right where Highway C comes down the hill and enters the Mississippi bottoms area.  This map shows its location. 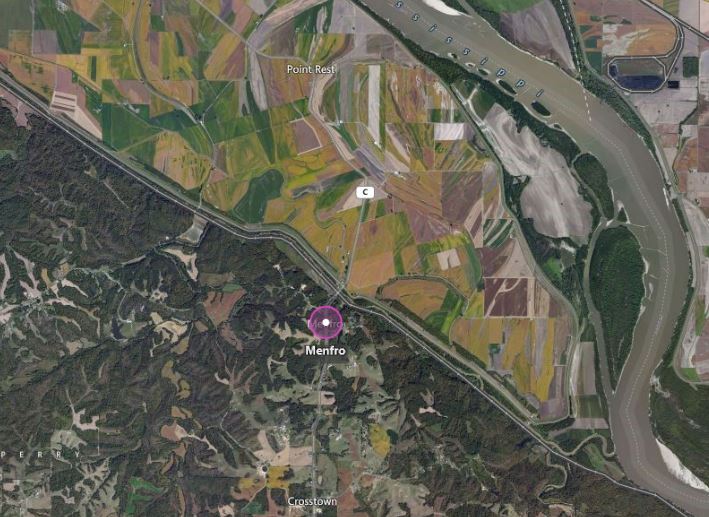 One of the three children born to Carl and Lydia, Raymond Gross, died at an early age in 1935 and is buried in the Point Rest Cemetery, which was the cemetery for Trinity Lutheran Church in Point Rest.  That town can be seen on this map.  Their cemetery is actually located about where the Menfro label is on the map.

Sometime in the later 1930’s, the Gross family moved to St. Peter, Illinois.  In the 1940 census, we see the following entry concerning Carl’s occupation.

He was the proprietor of a grocery and meat market in that small town not far from Altamont, Illinois.

We have quite a cache of Gross family photos to show.  In fact, one of the big reasons I did this story today is the fact that I am always attracted to stories when I have plenty of photos.  I will put several of these photos in a gallery with captions, and you will be able to enlarge them by clicking on them.  Raymond, the child who died early, is shown in the photo from Menfro.  He was the middle child.

Carl died in 1959 in Illinois.  Lydia would marry again after his death.  Her second husband was John Augusta Kroening.  They were married at Bethlehem Lutheran Church in a rural area near Altamont, Illinois.  Here is a photo of that church.

She also outlived him.  Lydia died while living in Centralia, Illinois in 1988.  That is where her son, Edward, was living.  I was unable to find either Carl or Lydia’s place of burial.

The story of the Gross/Dreyer couple is yet another one where we see a family which moves around several times during their lives.  One thing seems to remain constant.  They remain faithful and manage to be members of a Lutheran church wherever they go.

One thought on “Gross Grocery”