The last child of Johann Stueve was born on this day, March 11, in 1893.  Her name was Frieda Emma Maria Stueve.  Her mother was Maria (Wichern) Stueve.  Frieda was baptized at Concordia Lutheran Church in Frohna, Missouri.

One of the fascinating aspects of this family is the fact that Frieda’s father was married three times, and according to our German Family Tree, he sired thirteen children.  As already stated, Frieda was the last.

Johann Stueve (pronounced Steve) was born on July 7, 1836 in Lamstedt, Germany.  There is a little controversy about Johann’s year of birth which originates from his death record in the Concordia, Frohna church books.

If you do the math on the number of years, months, and days that are shown here, it would place his birth during the year 1837, not 1836.  However, this baptism record from Lamstedt should put this to rest.  It was recorded in 1836.

Also, Johann’s gravestone is inscribed with 1836.

By the way, the death record shown above indicates that Johann died when he was shot accidentally while cleaning his gun in 1897.  Because of this, Frieda would have practically no memory of her father, since he died when she was just 4 years old.

According to a tale told in the family, Johann had come to America before 1866, but then he returned to Germany to bring over his future bride, Rebekah von Glahn.  That story was told in the previous blog post titled, Bringing Back a Bride.  This passenger list from the ship Carl illustrates this situation.

This baptism record for Rebekah shows that she was born on May 12, 1838 in the same church in which Johann had been baptized.

Johann and Rebekah were married not long after arriving in the United States in 1866.  This couple would have two children.  The second one was born on March 16, 1869.  Rebekah died not long after that birth on April 10th.  Despite this fact, that infant went on to live a very full life.  So many infants did not survive when their mothers died around childbirth, but not this one.

Johann’s second wife was Maria Luehrs.  Her surname is one that you can find in many Lamstedt records, but I could not locate Maria’s baptism record.  It is believed that Johann and Maria were married in 1870, but there is no church record to document that.  Our German family tree shows four children baptized at Concordia in Frohna from this family.  However, none of the four show up in the 1880 census, so I conclude that they all died early.  Maria died early also.  She died at the age of 24 in 1877.

That leads us to Johann’s third wife, Maria Wichern.  She was another girl from Lamstedt.  We have this baptism record which indicates that she was born on February 2, 1851.

These two were married in 1879, and they had 7 more children between then and 1893 when Frieda was born.  Here is the 1880 census where Maria is shown as the wife, but they have had no children yet.

A couple questions come from this census.  First, the age shown for Johann appears to be a few years off.  He should have been 44 in 1880.  Also, there is a mystery son in the record.  Henry (age 14) is a puzzle even for people in the Stueve family.  No one knows who he is and he does not show up in any church records.

When Frieda was 21 years old, she married Carl Ludwig “Charles” Palisch.  They were married on October 18, 1914.  Here is their marriage license.

Charles was the son of Ludwig and Paulina (Grother) Palisch.  We also have this wedding photograph. 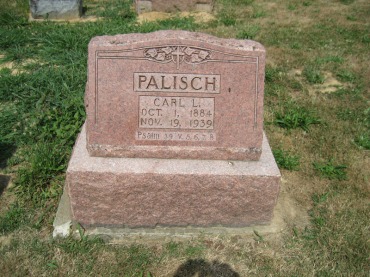 Frieda and Charles also have another claim to fame.  They are the grandparents of Kathy (Palisch) Berkbigler, who is the head honcho of the zionrootsgenealogy.org online site that is such an important part of our family research efforts we make here at our museum.  Here is a photo of Kathy and her husband, Larry.

Just a final note.  Kathy is presently going through some serious medical issues.  Please keep her in your prayers.