Today’s story once again comes out of Farrar, but before I tell the story, I want to plug an event that is taking place in Farrar this weekend.  Tonight and tomorrow are the final performances of a play that a group of folks mostly from Salem and Zion Lutheran Churches are putting on.  Here is the playbill for that production.

I have attended their production in the past, and they put on a great show.  It is guaranteed laughter.  Today’s story is about the Lorenz and Versemann families.  I have not seen the cast list yet for this play, but it is very likely to have several folks with those surnames on it.  What I can do is show you a photo of this fun-loving cast.

Now on to today’s story.  March 23rd was the birthday of Hubert Lorenz in 1918.  He was the son of Theodore and Clara (Kassel) Lorenz of Farrar.  Hubert was baptized at Salem Lutheran Church on the Tuesday of Holy Week.  Hubert’s father, Theodore was mentioned in a recent blog about working together as carpenters with his brother Herbert.  That post was titled, Youngest Marries the Oldest.  Theodore can be seen on the far right in this Lorenz family photo that has been seen on this blog before.

Theodore can also be seen, once again on the far right, in this photo of the Farrar Reds baseball team. 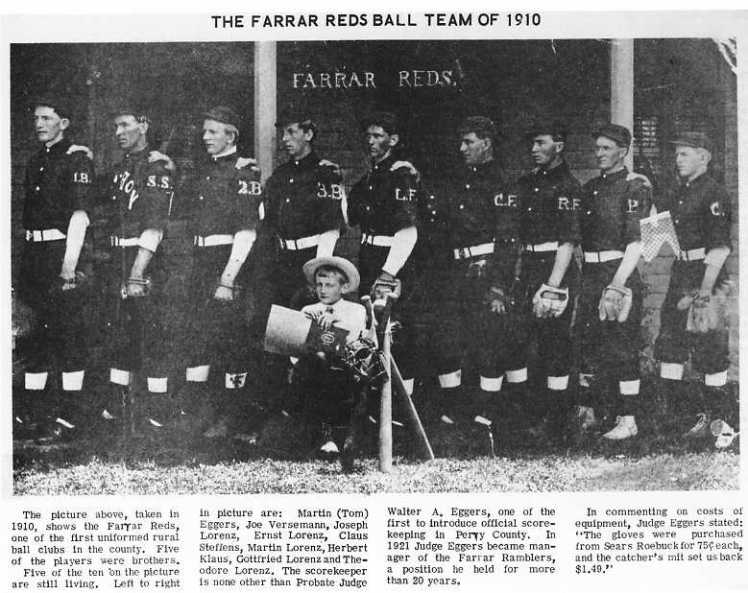 Hubert played sports also.  He played football at Perryville High School.  After high school, he attended Southeast Missouri State University in Cape Girardeau.  Then in the 1940 census from Farrar, we find Hubert listed as a 22 year old public school teacher.

In a book we have here at the museum, it indicates that Hubert taught at the Eureka School from 1937-1941.  At that point in his life, Hubert was still single, but that situation would not last long.  In 1941, he married Meta Versemann.  Here is their marriage license.

Meta was the daughter of Gottlieb and Martha (Mangels) Versemann of Farrar.  She was born on January 29, 1917 and also baptized at Salem Lutheran Church.  The German Family Tree says there were 10 children born into this Versemann family, with only one of them being a boy named Edwin.  Meta was number 8 in line.  In this census from1920, we see Meta as one of 8 children.  One older sister died before she was one year old, and one sister was born two years after this census.

Here are two photos that I am placing here just to acknowledge the two brave souls in this family of women, Gottlieb, the father, and Edwin, the only son.

Here we have the wedding photo of Hubert and Meta Lorenz.

Just a year after this wedding, Meta had to watch her husband go off to war.  Hubert served in the U.S. Army during World War II.  We have this photo of him in his military uniform.

When he left to serve his country, his new sister-in-law, Francis Versemann, took over teaching at the Eureka School.

After coming home from the war, Hubert went to work at the Eggers & Company General Store in Farrar where he worked until April of 1966.  At that time, he and three others purchased the store from the Eggers brothers and renamed it Farrar General Market.  He worked there until his retirement.

In 1960, Hubert was named the postmaster in Farrar.  Here is documentation of that appointment.

I have to thank Fred Eggers for providing interesting information and photos that made this post better than I could have done myself.