If he was alive today, we would be celebrating the 127th birthday of Walther Theodosius Weinhold.  Walther is shown on many documents as being named Walter, and my guess is that most people called him Walter during his lifetime.  However, his given name was Walther.  One may wonder if he was named after the famous Walthers who were leaders of the 1839 immigration.   However, I do not think this is the case.  I think he was named after his grandmother.  She was also one of the original immigrants.  Her name was Johanne Christiane Caroline Walther.  Not long after arriving in America, she married Johann Heinrich Weinhold.

There were three Walthers included in the Gesellschaft.  There were two Walther brothers who were pastors, and then there was Johanne Christiane Caroline Walther, who does not appear to be a sister of the two men.  She may have been related in some way, but I have been unable to find a connection.  She was a seamstress from Mittelfrohna.  Here is a photograph of her.

Walther was the eleventh child of Martin and Magdalena (Noennig) Weinhold.  Here is a photo of Walther’s parents. 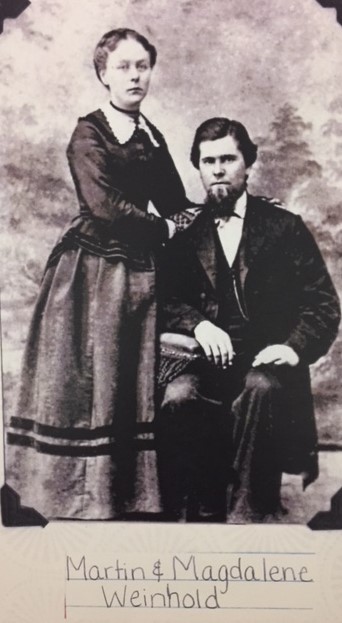 A previous blog post told the story of this Weinhold family and focused on one of Walther’s brothers, Arthur Weinhold.  That post was titled, Run of the Mills.  As it turns out, Walther follows a similar career path to Arthur’s.

The first census in which we find Walther is the Frohna 1900 census.  Even though Walther was the 11th child in this family, you can see that another four children were born after him.

In the 1910 census, we see that Walther had moved to Wittenberg to work at the flour mill there which was run by his Uncle Joseph Weinhold.  In fact, you can see in this census that he was living with aunt and uncle.

We also have this photograph of the wedding party for this marriage.

The Walther Weinhold family was still living in Wittenberg in 1920.  Here is the census for that year.  By then they had two sons, Norman and Edwin.

In fact, three Weinhold brothers from Frohna were working at the flour mill in Wittenberg at that time.  You can see them all right together in this census record.

Another child, Lillian, was born on Christmas Day in 1921.   She is the last child to be recorded for this family in the St. Paul’s Lutheran Church books in Wittenberg.  We have this photo which was taken in front of the Weinhold home in Wittenberg during a flood with these three children in the picture.

Walther is also pictured in this photo of the crew working at the Wittenberg mill.  Walther is the second man from the left with his arms folded.  His brother, Edward, is the next man to the right with his arms also folded.

By 1930, Walther had moved his family to St. Louis.  He was working for the Wagner Electric Company as a mill wright.

One more child was born in St. Louis.  His name was Walter.  Here we see the Weinhold family in the 1940 census.

You can see that Eleonore’s mother was living with them, along with Eleonore’s invalid brother, Hugo.

Today is one of those rare cases when I have way more photos available for this story than I can use.  I am going to include a photo gallery here with thumbnails of photographs that you can click on to enlarge.

Just one more note:  Recently, I attended my sister-in-law’s funeral in Lester Prairie, Minnesota.  They had a wall highlighting all the pastors that had served at the congregation where the funeral took place.  The first pastor of that church was another brother in this Frohna Weinhold family, Rev. Martin Weinhold, who served that congregation from 1905-1911.  He may be a story for another day. 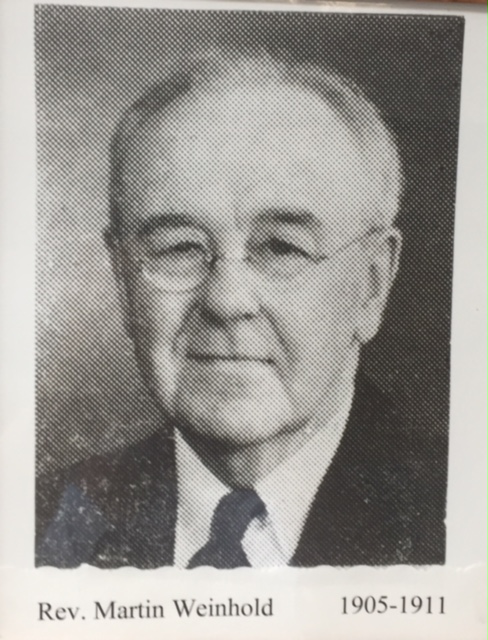 2 thoughts on “Named After His Grandmother?”