Today, I will tell you another story that takes place on both sides of the Mississippi River.  The highlighted event for today will be a marriage between a young man from Fountain Bluff Township in Jackson County, Illinois and a young girl from Altenburg, Missouri in Perry County.  It was the wedding of Henry Arbeiter Jr. and Lucy Buck.  This marriage took place at Trinity Lutheran Church in Altenburg on June 7, 1903.  Here is the marriage license for that occasion.

For some unknown reason, Henry is said to be from Perry County, Missouri on this form.  The Trinity church record says he was from Fountain Bluff, Illinois.  How a young man and young lady from opposite sides of the river managed to become a couple is a mystery to me.  We do have this photograph of their wedding.

The wedding party in the back row consisted of (L to R) Marie Poppitz, Ernst Arbeiter, Caroline Arbeiter, and Rudolph Buck.

Henry Arbeiter was the eldest son of Henry and Caroline (Rowold) Arbeiter.  In the German language, an arbeiter is a “worker”.  Therefore, Henry was the eldest worker in this family.  A previous blog post was written about Henry’s parents titled, Family Photos.  Henry and Caroline Arbeiter had at least four family photos taken during their lifetime.  Two of them were shown in the previous post.  I will show two more of them in this post.  Here is the earliest one, which is said to have been taken around 1896.

Henry, Jr. is the tall boy in the back right.  There were two more girls born into this family after this photo was taken.

The following photograph (which was included in the previous post) is believed to have been taken around 1903, which is also the year that Henry and Lucy were married.  However, this photo was taken in Murphysboro, Illinois.  Henry, Jr. is the older son seated between his parents.

Lucy Buck was the daughter of Gottlieb and Pauline (Oehlert) Buck.  Here is a map showing where her father farmed in Altenburg.

After the wedding in 1903, Henry took his new bride across the river, and she became a farmer’s wife.  In this plat map of the Fountain Bluff Township, we see where there are land parcels attributed to Henry Arbeiter.

It is possible that some of the land could have been farmed by Henry, Sr. and some of it farmed by Henry, Jr.  You can see how close the Arbeiter land was to the Mississippi River.  Here is a map showing what that area looks like today. 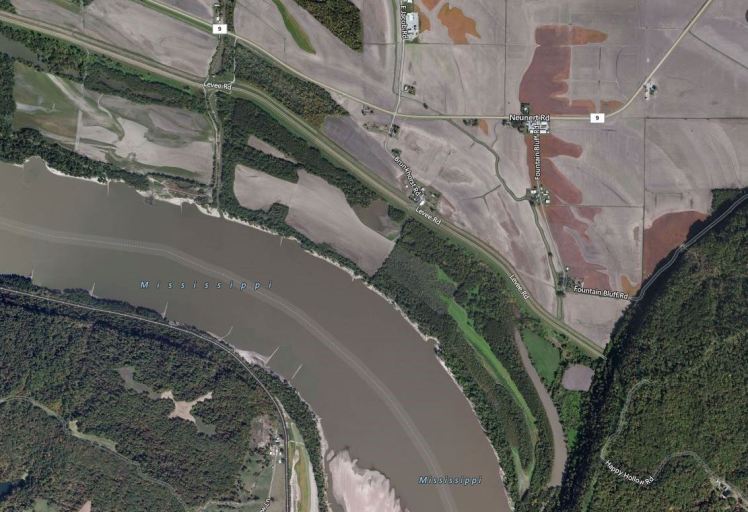 Henry and Lucy Arbeiter are credited with having 8 children.  I am going to focus on just one of them for a moment.  Her name was Linda Arbeiter, and she was born on October 9, 1910 and baptized at Christ Lutheran Church in Jacob, Illinois.  However, in early 1911, she got sick.  Her parents apparently sought medical help in Altenburg, Lucy’s hometown.  She was suffering from whooping cough, which in those days had no vaccination or cure.  Linda died on February 27, 1911.  Here is her death certificate.

The doctor who cared for Linda was Dr. Kluegel.  He was only in the Altenburg area for a short time, and it is rare to see his name on a death certificate.  His office was located in what the locals around here call “The Inn”, which is next to the Altenburg water tower.  Linda was buried in the Trinity Lutheran Cemetery in Altenburg.  I went to the cemetery to find her gravestone, but was unsuccessful.  In this photo I took, the red arrow on the left shows a gravestone that is dated 1910, and the red arrow on the right is dated 1913.  Linda is likely to be buried in between those two.  The other graves in between are unreadable.  This is the area of the cemetery where children were buried.  Interestingly, I was practically standing on the Buck land next to the cemetery when I took this picture.  The shadow of the cemetery fence in the lower right is the dividing line between the cemetery and the land that used to be owned by Lucy’s parents.

Henry filled out a draft registration form for World War I in 1918.  You can see his occupation listed as farmer.

In 1931, Henry’s parents celebrated their 50th wedding anniversary and had another family photograph taken.

Henry, Jr. is seated in front on the left next to his father.

Henry, Jr. died in 1939 at the age of 57.  He had suffered a stroke several months before his death.  The newspaper article below was printed in a local publication.  In addition to being a farmer, this story indicates that Henry was involved in local politics, serving as the elected supervisor for the Fountatin Bluff Township in which he lived all of his life.  Henry’s father had died before he did, but his mother survived him.  She would die in 1943. 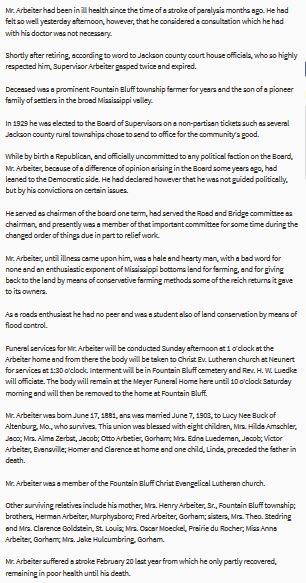 Lucy Arbeiter died 20 years later in 1959.  Henry and Lucy are buried together in the Christ Lutheran Cemetery in Jacob, Illinois.  Here is their gravestone.

I would like to thank Sally Gustin for the extra information that we have in our research library that documents the Arbeiter family.  Sally has been a guest blogger on this site before, and I wish I could have had her write this story, but I found it too late.  Maybe Sally will bless us with another blog post some day.

2 thoughts on “The Eldest Worker”