Sophia Grass, if she were alive today, would be celebrating her 172nd birthday.  She was born in 1846 in St. Louis, Missouri.  Here is her baptism record from the Old Trinity Lutheran Church books.  We do not have the originals of these records at our museum, but we do have an Excel spreadsheet that shows them.

Sophia was the daughter of Christian and Anna (Loehne) Grass.  A blog post was written a while back about how this family came to America.  It was titled, A Lot of Grass Died.  In that post, it was said that the Grass family was part of the New York Group that arrived in Perry County in 1839.  However, because of the controversy taking place here, many of the folks from that group did not stay in this area very long.  The Grass family, for instance, moved to St. Louis in the early to mid-1840’s and had a few children there.  Then they moved to Collinsville, Illinois where they were involved in establishing Holy Cross Lutheran Church.  This portion of Holy Cross’s online history indicates their involvement in 1848.

We find the Grass family in the 1850 census from Collinsville, and it includes Sophia.

Sophia’s father was a tailor.  Meanwhile, back in Perry County, there was another tailor by the name of Jacob Seibel who also had arrived in Perry County as part of the New York Group.  Contrary to the Grass family, the Seibel family decided to remain here.

Jacob Seibel married Christiane Rabold on July 9, 1843.  Here is their marriage record from the church books of Trinity Lutheran Church in Altenburg.

One year after their marriage, they had their first child.  His name was Johann Emanuel Seibel.  Here is his baptism record from Trinity.

We find Emanuel in the 1850 census from Altenburg.  Emanuel is listed as John E. Seibel.

In 1858, Emanuel Seibel was confirmed.  His confirmation record is found in the church books of Concordia Lutheran Church in Frohna.  That had me puzzled for a while, but here is an image of that record.

At the end of 1857, Trinity was dealing with the event which involved Rev. Georg Schieferdecker being removed as their pastor.  It took a while for Trinity to get a new minister.  Although by the time of this confirmation, they did have a new pastor, the confirmation class was probably conducted by Rev. Christoph Loeber in Frohna during the interim.

Emanuel served the Union Army during the Civil War.  We have a few documents which describe his service. 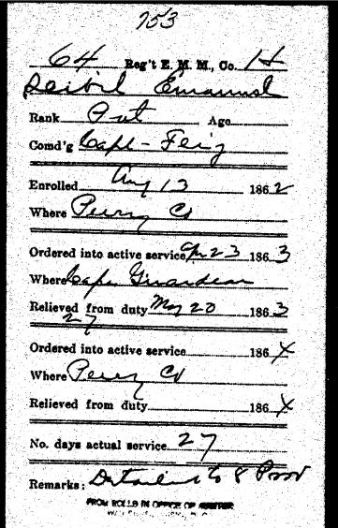 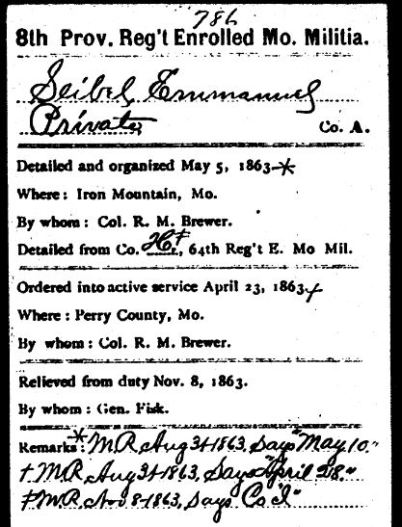 Later in his life, a pension record also shows that Emanuel had served during the Civil War.

Emanuel Seibel from Altenburg and Sophia Grass from Collinsville, Illinois were pretty close to each other in age.  These two managed to come together as a couple and get married.  I don’t know exactly how that transpired, but I am guessing it had something to do with them both being children of tailors who were part of the New York Group.

I could not find a marriage record for Emanuel and Sophia.  I have a suspicion that a record could be found in the church books of Holy Cross Lutheran Church in Collinsville.  The marriage must have taken place sometime around 1868.  Their first child was born in 1869.  That child, as well as all their other children, was baptized at Concordia Lutheran Church in Frohna.  The 1870 census shows Emanuel and Sophia living in Frohna where Emanuel was a blacksmith.  I guess it is possible that Frohna was in need of a blacksmith.

This record shows Sophia being born in Illinois.  The Old Trinity record shown earlier proves she was born in Missouri.  However, she did spend almost all her childhood in Illinois.

Emanuel lost his wife in 1900.  The census for that year shows Emanuel as a widower and living with his youngest daughter, Emma.

I included some other entries from that census.  Right under Emanuel, you will see Concordia Lueders.  Concordia is actually one of Emanuel’s daughters.  She had married August Lueders in 1891, and then August died in 1892, leaving Concordia a widow with one child.  Under Concordia in this census, you will see Fritz Seibel, who was another child of Emanuel.  He, like his father, was a blacksmith.  Under Fritz, you see the patriarch of the Lueders family, Charles, who ran the Lueders store in Frohna.  Concordia was his daughter-in-law.

Both Emanuel and Sophia were buried in the Concordia Lutheran Cemetery in Frohna.  Here are there gravestones. 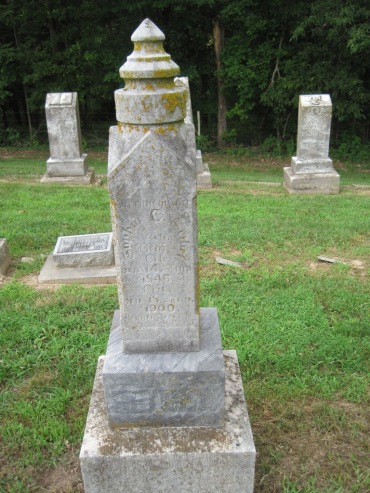 From tailor to blacksmith.  From Altenburg to Frohna.  From Perry County to St. Louis to Collinsville, Illinois, and back to Perry County.  There are certainly some interesting changes that occurred within this story.  Changes such as these make researching these stories fascinating to me.