It was August 20, 1892.  The setting was Farrar, Missouri.  Frank and Erna Kassel were blessed with their third child, a boy by the name of Karl Heinrich Kassel.  He would go through life using the name Henry.  Henry was baptized at Salem Lutheran Church in Farrar.  Here is his baptism record.

Every once in a while, I run across a record in a Perry County Birth Register, and there is such a record for Henry.

The original Kassel to show up close to this area was Phillip Kassel who lived in Egypt Mills, married Fredericke Wilhelmina Buldman, and served the Union Army during the Civil War.  Three sons from that couple (it may have been their only three children) settled in Perry County.  One of them, Christian Phillip Kassel, lived near Uniontown.  The other two, Frank George and Phillip Henry Kassel, lived in Farrar.  Today’s birthday boy comes from Frank.

Frank Kassel married Louise Bangert in 1866 at Trinity Lutheran Church in Friedheim, Missouri.  We now have the church records from that congregation in our museum, and some volunteers are in the process of transcribing it.  Also, a bus tour planned as part of our upcoming immigration conference will be making a stop at the Friedheim church.  Here is the marriage record for Frank and Louise.

After their marriage, Frank and Louise were living in Farrar where Frank was a farmer.  This land map from 1915 shows where their farm was located.  It also shows that Frank’s brother, Phillip Henry, was his neighbor.

Ernestine was the daughter of Immanuel and Clara (Weinhold) Koenig.  She was born on July 29, 1894 and baptized at Salem Lutheran Church.

It does not appear that Henry was drafted into that war.  According to our German Family Tree, Henry and Erna had eight children.    When Henry filled out a draft card for World War II, it appears that he was in the same place and doing the same thing that he had been doing most of his life.

Erna died in 1946.  Henry married again in 1955.  His second wife was Clara Schuessler.  Clara’s maiden name was Schuessler; she married two Schuesslers (plus a Kassel); both of her Schuessler husbands had different parents….meaning that they were not brothers.  That sounds like a good story line for another blog post.

Henry died in 1963.  Both Henry and Erna are buried in the Salem Lutheran Cemetery in Farrar.  Here are their gravestones. 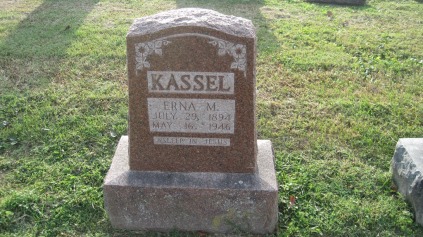 Clara is buried in the Concordia Lutheran Cemetery in Frohna.

Henry and Erna had what appears to be a very run-of-the-mill life in which he was a farmer in the same place all his life.  However, let’s take a look at the surnames of the spouses of their children.  Mahnken-Versemann-Miesner-Stueve-Koenig-another Stueve-and another Mahnken.  That’s seven out of the eight spouses, and I would describe those surnames as being part of the Farrar Family Hall of Fame.

The last of the Kassels, Vivian Kassel, married a Schirmer from Altenburg.

How did they ever permit that to happen?