A little over a month ago, I wrote a post about some Guetersloh twins, Ida and Martin, that was titled, The Guetersloh Twins’ Spouses.  I did not notice at the time that the father of those twins was a twin himself, and his twin was a sister.  I will attempt to tell the story of this set of boy/girl twins today because today would have been their birthday.

Henry and Mary Guetersloh were born on September 19, 1875 in Oyten, Lower Saxony, Germany.  This map of Oyten shows how close it is to Scheeßel, an area where several other folks found in our German Family Tree originated.

On some census records, we can see that the Guetersloh family arrived in America in 1885 when these twins were about 10 years old.  They settled in the Jacob, Illinois vicinity.  The first record we find of them is their confirmation record in the Christ Lutheran Church books.  They were confirmed in 1889.

I will add here that the Guetersloh records in the Christ Lutheran, Jacob books give two pastors’ names, Rev. Estel and Rev. Petzoldt, who both have Perry County, Missouri roots.

Mary was the first one of the twins to get married.  She married Henry Luedemann on November 3, 1892 at Christ Lutheran, Jacob, Illinois.  It was Henry’s second marriage.  This is their marriage record.

Rev. Estel had beautiful handwriting skills.  I wish all pastors would write this neatly.

Three children born to Henry’s first wife all died before this marriage to Mary took place.  Henry and Mary Luedemann have eleven children listed in our German Family Tree.  I checked.  None of them were twins.

One of the noticeable differences between these two twins is that I found absolutely no photographs associated with Mary’s family, yet I found so many that show Henry’s family that I had to choose which ones to include in this post.

Henry Guetersloh got married in 1897.  His bride was Katherina (Katie) Dreyer.  Here is their marriage record in the Christ Lutheran, Jacob books.

Rev. Estel has even gotten to where he puts a little red ink into his records, making them even more artistic.

Katie Dreyer was the sister of the Henry Dreyer who was a main character in the post, Walther and Dreyer, which was posted a while back.

Here is a wedding photo of Henry and Katie.  It is more evidence of what I refer to as black and white weddings.  I have seen a few of these “shaking hands” wedding photos, and they always make me giggle.

Just like his sister Mary, Henry and his wife have eleven children listed in our German Family Tree.  I find it pretty amazing that Mama Margaretha Guetersloh managed to see 22 grandchildren come from a day of childbirth she had back in Germany in 1875.

I am going to put a small collection of photographs of Henry and Katie and their family in a gallery.  The thumbnails are clickable.

I suppose there is a possibility that Henry’s twin sister is in the last photo, but I do not know for sure.  I wish I had found the one titled “Henry Guetersloh family” before I wrote the previous post about the twins Ida and Martin because they are standing in the back of the photo on the right.

Here are images of the 1920 census, the first one showing Mary Luedemann’s family and the second one showing the Henry Guetersloh family, when they both lived in the Jacob, Illinois area and both the husbands were farmers.

Somehow, Mary was declared to be 45 years old and Henry to be 44 years old even though they were twins.

The twins died within one year of each other.  Henry died in 1952.  Here is his Christ Lutheran death record.

Mary died in 1953.  Here is her death record.  It appears that somewhere along the line, an “n” was taken off the Luedemann name.

The twins and their husbands are all buried in the Christ Lutheran Cemetery in Jacob, Illinois.  Here are their gravestones. 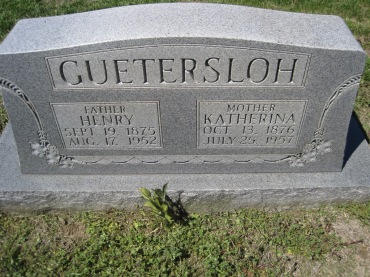 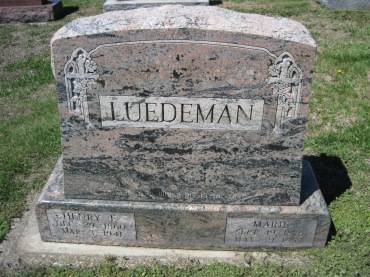 One more thing today.  On July 15, 1878, three years after the birth of Henry and Mary, Margaretha Guetersloh gave birth to yet another set of twins.  And, yes, it was a boy and a girl, Dietrich and Meta.  But that story is just going to have to wait to be told.  Maybe next year on July 15th, if I remember.