While searching for a story to write on November 13th, I ran across several events which took place in the Fiehler family.  Today, I will share with you some of these fascinating facts.  Before I proceed further, there was a previous post written on this blog about the Johann Gottlob Fiehler family which arrived in America aboard the Copernicus in 1839.  It was titled, A Handful of Johanns.  A few of those Johanns will show up in today’s post.

We will start with the youngest of the Johanns in that family.  His name was Johann Laurentus Ehregott Fiehler.  This boy went by the name Ehregott.  His birthday was June 1, 1849, and he was baptized at Grace Lutheran Church in Uniontown.  This is his baptism record.

When he was 27 years old, Ehregott married Antonia Telle at Grace Lutheran.  Antonia was the daughter of Casper Herman and Eva (Hemmann) Telle.  She was the oldest child in that family.  This is her baptism record.

Here is the marriage record found in the Grace Lutheran books.  They were married on November 13, 1873.  There is not much information in this record, and it is quite difficult to read.

We also have this civil record from Perry County for this marriage.

There are three marriages on this record.  The last one was the marriage of Gustav Hemmann, who was mentioned in the recent blog post about the Hemmann family.

This marriage between Ehregott and Antonia did not last long, and it did not result in any children.  That is because in 1874, Ehregott died, leaving Antonia as a widow.  Antonia would get married again in 1877.  She married Charles Hermann in Madison County, Illinois according to this Illinois marriage record.

Charles Herman can also be found in our German Family Tree.  There is only one record for him, however.  He is not recorded as being born in Perry County, but he was confirmed at Grace Lutheran Church in Uniontown.  The question about how a man in Madison County, Illinois would find a wife in Perry County was answered by looking at the list of confirmation students at Grace in 1867.

As you can see here, Charles Herman is #5, and Antonia Telle is #7 on this list.  These two were classmates in that confirmation class.  Charles and Antonia were living in Madison County, Illinois near the town of Worden in the 1880 census.

Antonia and Charles would have five children, but when the fifth one was born in St. Louis, she died.  A St. Louis death record shows that she died from exhaustion from labor.

She was buried in the Western Cemetery in St. Louis, which was the cemetery for the old Immanuel Lutheran Church.  This photo of her gravestone is not a very good one.

We will now return to Perry County and the Fiehler family.  Ehregott had a brother by the name of Johann Traugott.  He was born on September 22, 1846.  This is his baptism record.

As it turns out, Traugott married a woman with the surname, Hermann.  Her name was Martha Hermann, and these two were married at Grace Lutheran Church.  However, I could find no connection between this Martha Hermann and Antonia’s second husband, Charles.  There may be a connection, but I could not find it.  They were married on April 28, 1870.  Here is that marriage record.

Martha was part of a rather tragic story in this Fiehler family.  She gave birth to four children before dying in 1877.  Traugott married again in 1878 to Johanna Amschler.  This is that marriage record.

Johanna gave birth to four more children.  However, if you look at this page from the Fiehler Family History Binder that we have in our museum, it describes the fact that 7 of the 8 children of Traugott died at a very early age. 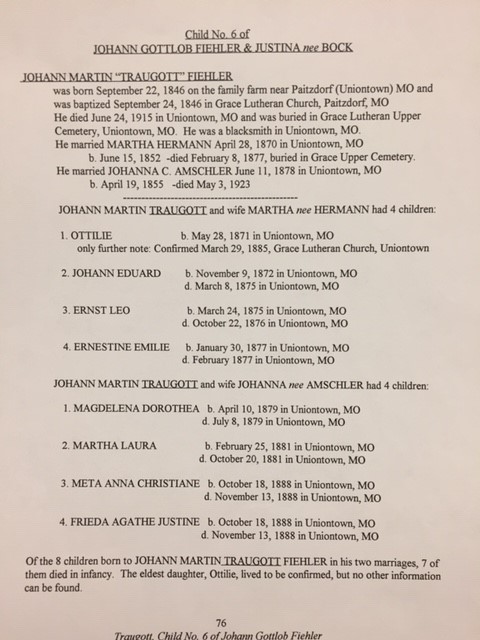 If you look at the last two names on the list, you will see a set of twins that not only were born on the same day, but also died on the same day at the age of 26 days.  They died on November 13, 1888.  Yet another example of Fiehler events which took place on today’s date.

The above photo states that the oldest child, Ottilie, lived to be confirmed, but no other information could be found.  That is no longer the case.  Gerard Fiehler has unearthed the fact that a newspaper article from that time period states that Ottilie committed suicide when she was a teenager by jumping in a creek.  It is said that she was depressed after seeing so many siblings die at an early age.

This is still not the end of the story.  Charles Hermann, who we said married Antonia (Telle) Fiehler, had a sister named Louise who married Paul Weinhold at Concordia Lutheran Church in Frohna.  These two were married in 1877, the same year that Antonia and Charles were married.  And I suppose you might be able to guess the date of their wedding.  That’s right, it was November 13th.