Arthur was baptized at Salem Lutheran Church in Farrar.  Below is his baptism record.

In 1894, on April 7th, Frieda Meyer was born.  She was the daughter of Joachim and Engel (Meier) Meyer.  That couple was discussed in the article, Meyer-Meier Marriage.  We have this photo of Frieda’s parents.

Frieda was also baptized at Salem, Farrar.  This is her baptism record.

On March 5, 1916, Arthur and Frieda were married at Salem.  Here is the church record of that wedding.

We also have this wedding photo.

Forgive, me, Dale, but I have reservations that the subjects of these two photos are the same person.  What do you think?

Here is an individual photo of Frieda.

Like so many other young men from this time period, Arthur must have not taken long after his marriage to move west to another state.  Also, like many other Perry County men, he landed in Sylvan Grove, Kansas.  His World War I draft registration was filled out in 1917 which indicates his residence there.  He was a farmer.

I will point out one more fact from this form.  The person filling out the form wrote that Arthur was “Stout”.  I do not think the person in the wedding photo above would be described as stout.  Of course, Arthur could have put on some pounds due to his wife’s “Frieda Food”.  One other thing:  This is the first of several documents from here on out that have Arthur’s last name spelled with one “n”, not two, although his signature has two.

We see this family living in the Pleasant Township in Kansas in the 1920 census with one son, Arnold.  That township is near Sylvan Grove.

In the 1920’s, the family must have traveled back to Perry County because Frieda is in this photograph with her parents and three sisters.  The daughters are not identified, but they are all there.  One of these daughters died in 1925, so I know the photo was taken before that time.  If it was taken on the occasion of her parents’ 25th anniversary, that would have been 1922.

My nearest guess is that the Bachmann’s moved their family to Oklahoma sometime around 1924.  They are found in the census for Washington County, Oklahoma in 1930 and the first child which was reported to have been born in Oklahoma was five years old.

This is where the Bachmann family would spend the rest of their lives.  I believe they had 9 children altogether.  Arthur’s World War II draft card says they were living in Wann, Oklahoma.

The map below shows where Wann is located and its proximity with Coffeyville, Kansas. 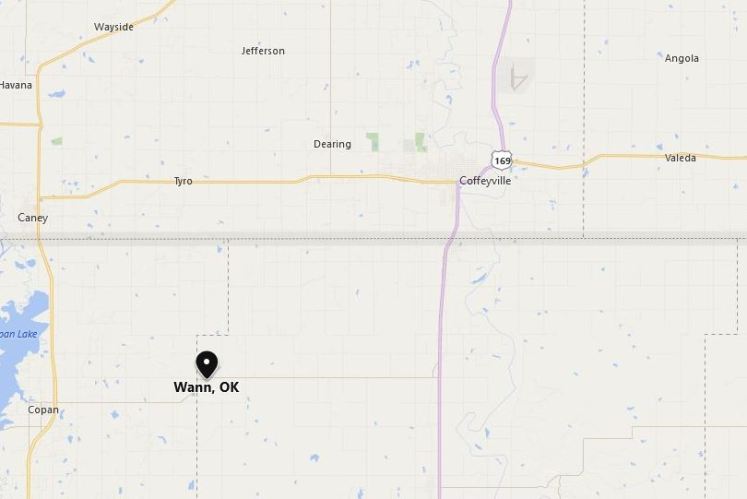 Both Arthur and Frieda died in 1972.  Frieda died in August; Arthur died in December.  They are buried together in the Restlawn Memorial Cemetery in Coffeyville, Kansas.

I cannot resist calling his name Bachmann, but you can see from several of these records above, including his own signature on the WWII draft card and his gravestone, that Arthur had used the name Bachman, with only one “n”.

So a Bachmann went to Washington.  Washington County, Oklahoma, that is.

I think there are several others who could have written this story…..Fred or Cal Eggers, Dale Kirmse, or Wayne Schuessler come to mind.  Maybe some of those guys could add some details to this family history.

2 thoughts on “Bachmann Goes to Washington”